When in Kuta, we had good wifi at the hotel and were able to make contact with Shyla and Tanner. Shyla and I are good friends from nursing school, Tanner is her boyfriend. Prior to the trip we found out that they too would be in Asia at the same time as us, so we had agreed to try to meet in Indonesia. It was surprisingly so easy and perfect timing to meet them in the gili islands. 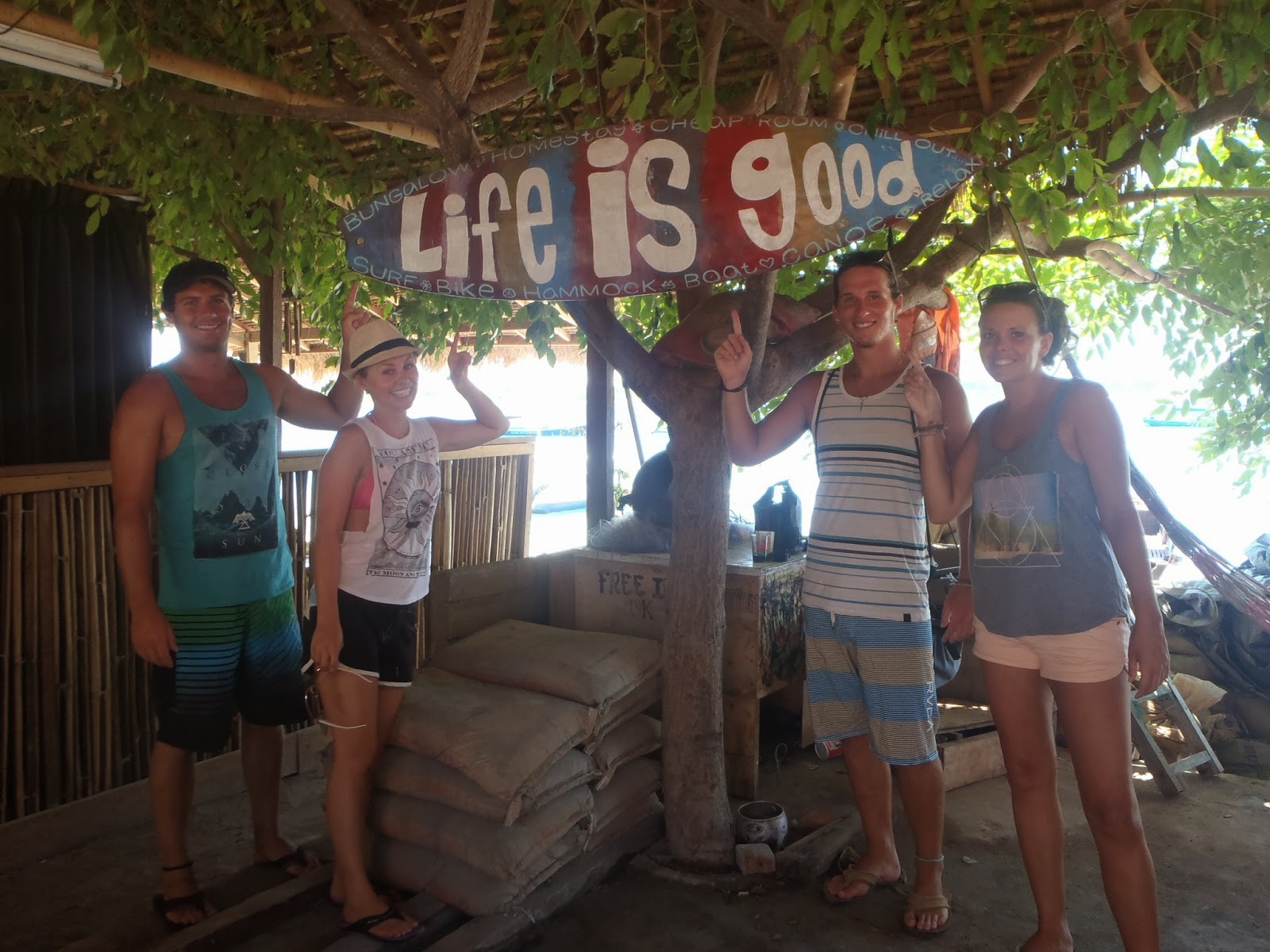 The gili islands we went too comprised of three tiny islands:Gili Trawangan, Gili Meno, Gili Air (in order of the picture below)
We met up on Gili T , as we called it, since no one could properly pronounce Trawangan. 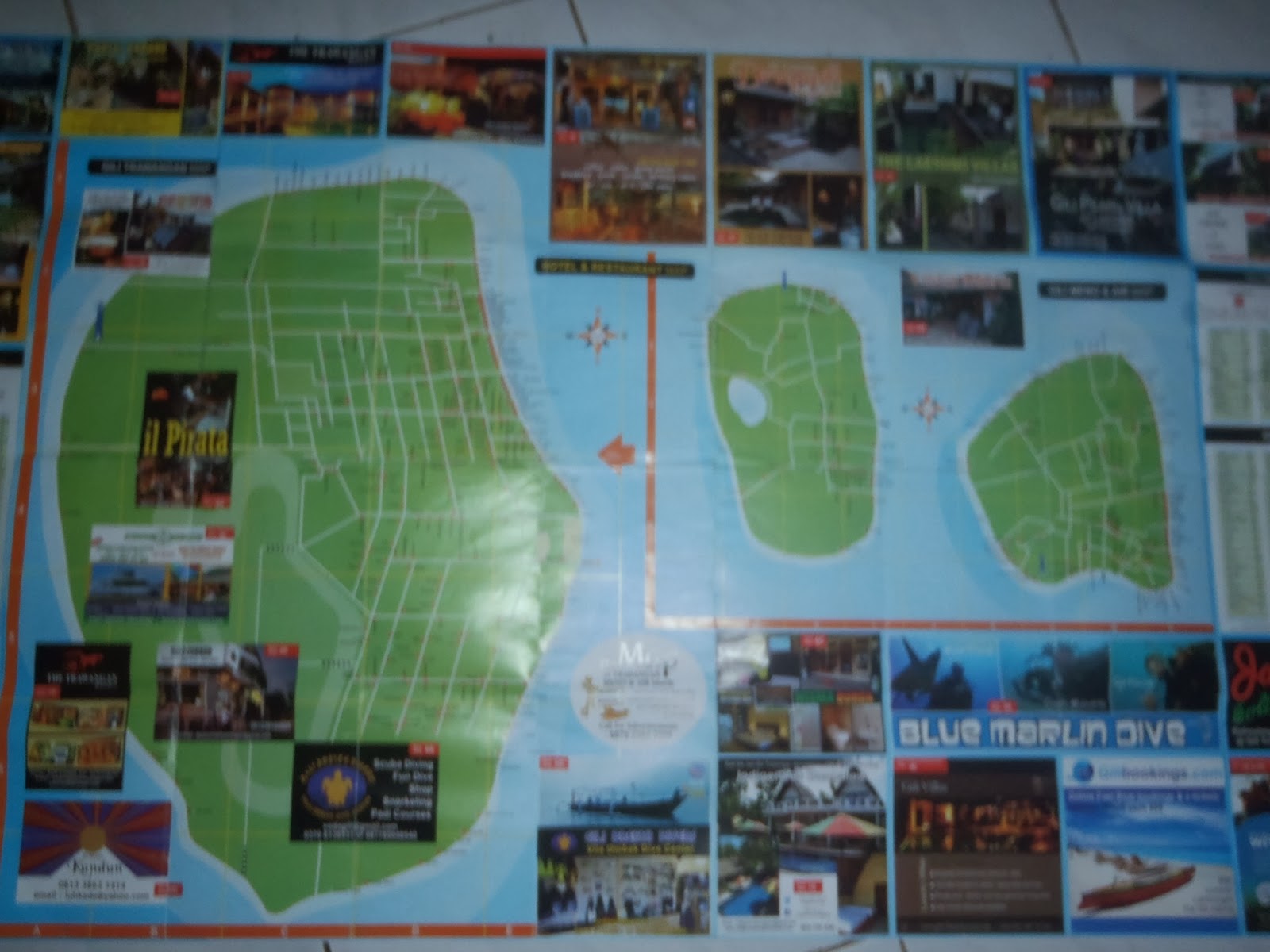 Super cool island. Nice white sand wraps the island and the water is gorgeous green and blue shades. It's quite touristy and the main area is lined with restaurants and accommodations. There are no vehicles or scooters (which was awesome! The only big form of transportation was horse and buggy,
or pedal bikes. There was a mosque on the island which had loud speakers. We could hear Muslim prayers all throughout the day. 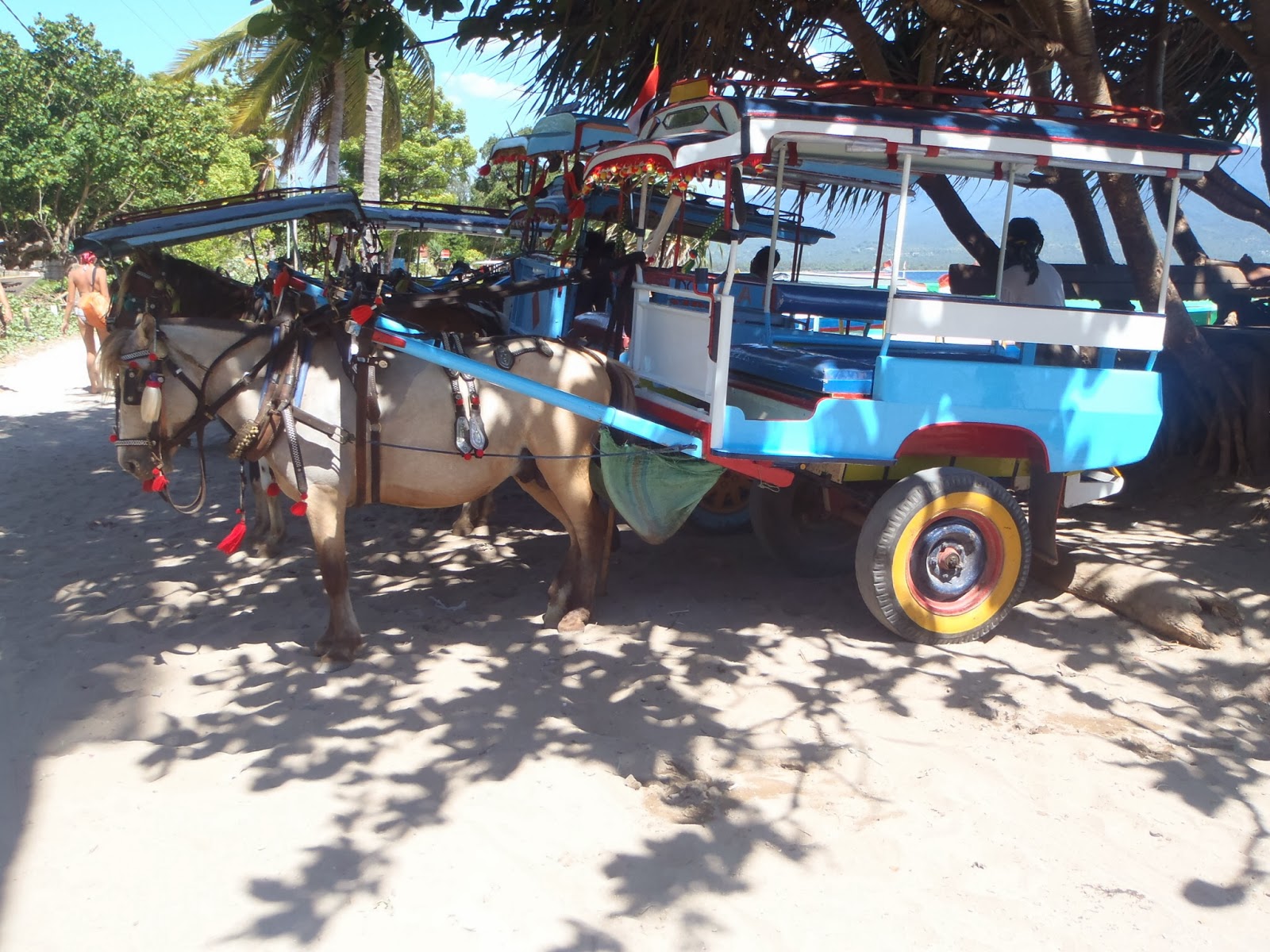 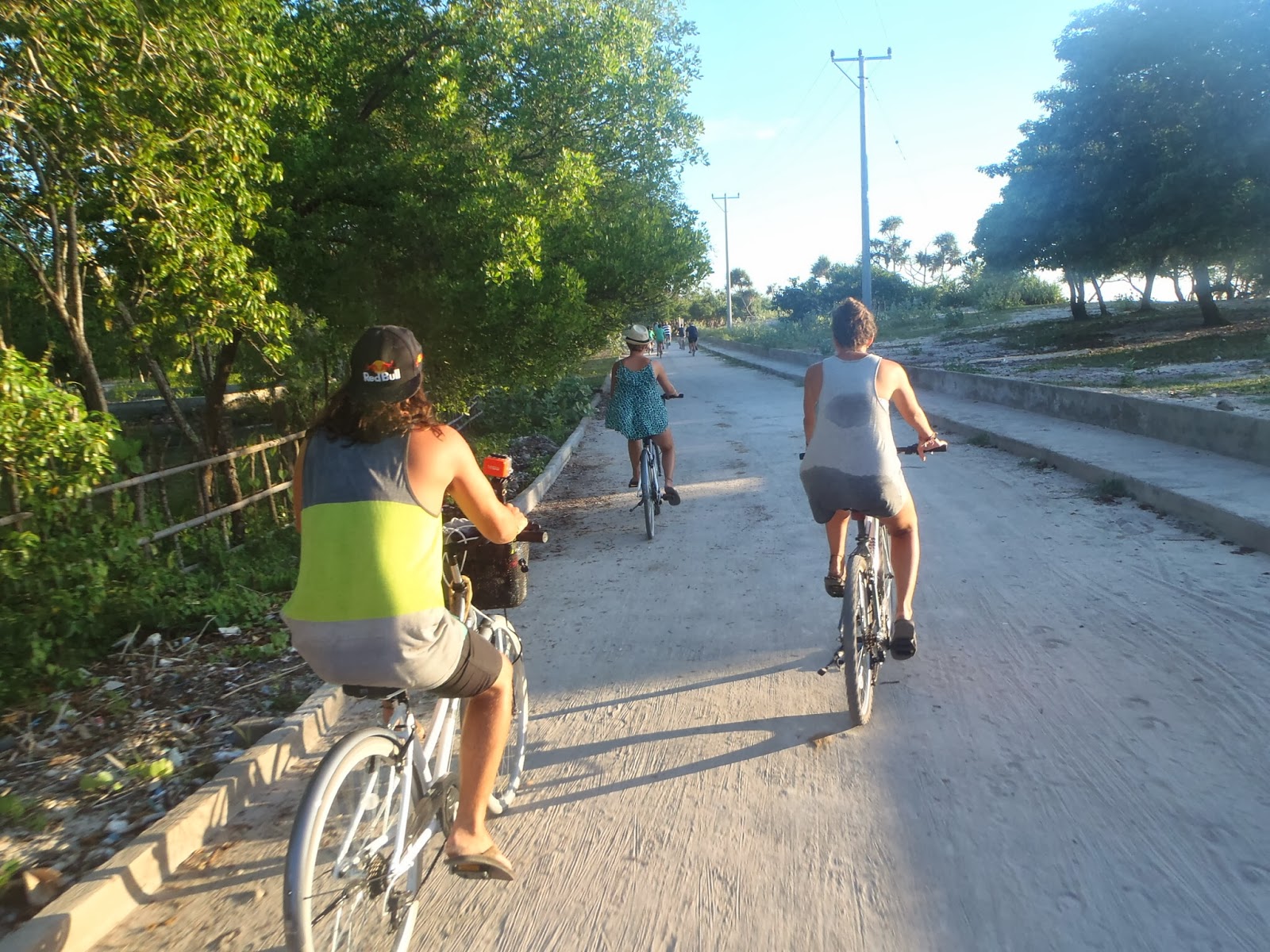 Ashton and I took a "fastboat" from Bali to Gili T. Aka a small ferry with 5 motors on it side by side. Pretty quick alright. Arrived smoothly in an hour.

Our first night together as a foursome we swapped travel stories and played cards at Pondok Sederhana. Which was a clean, $15 a night accommodation, a short walk from the main road, and yummy continental breakfast. 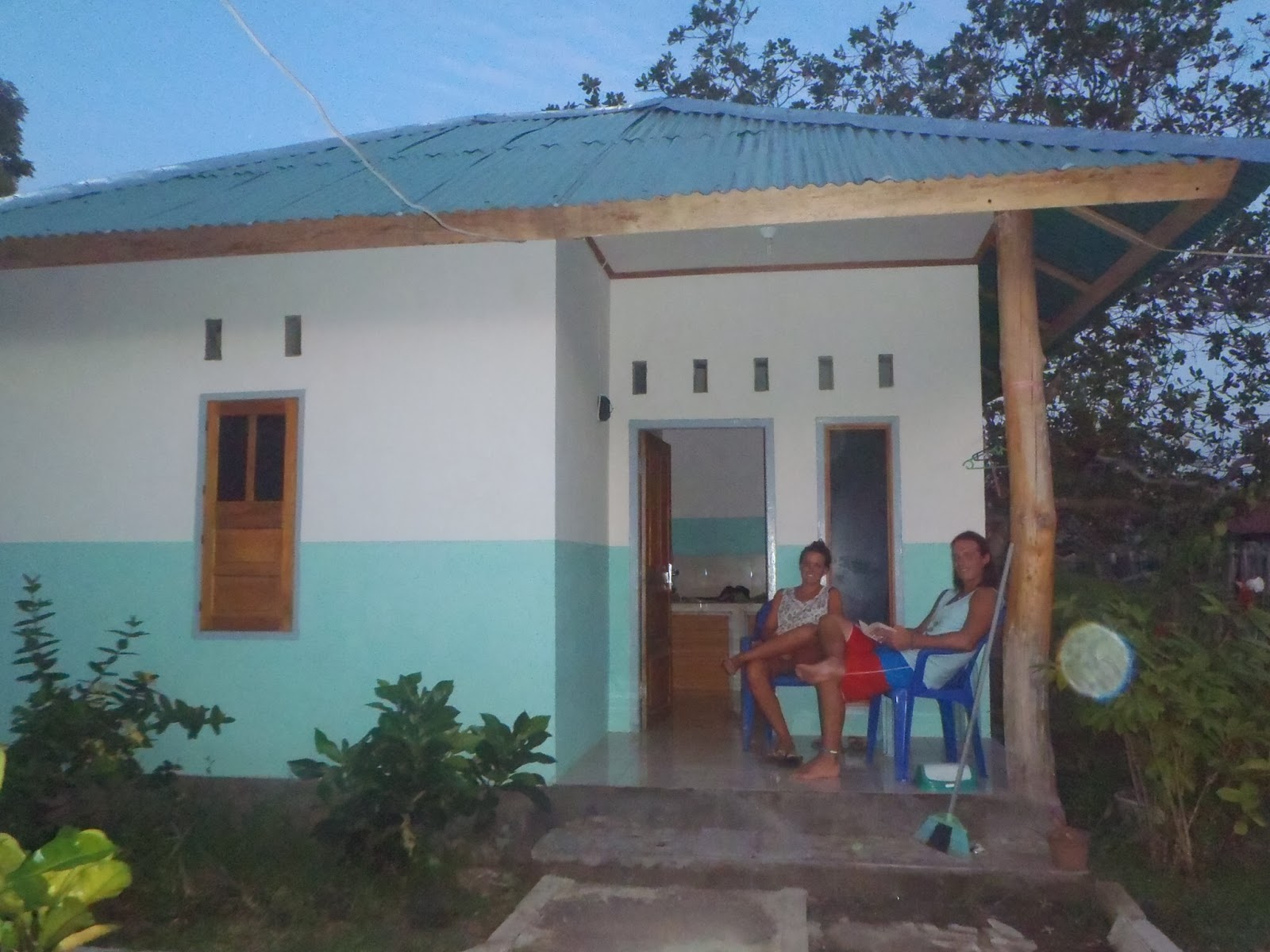 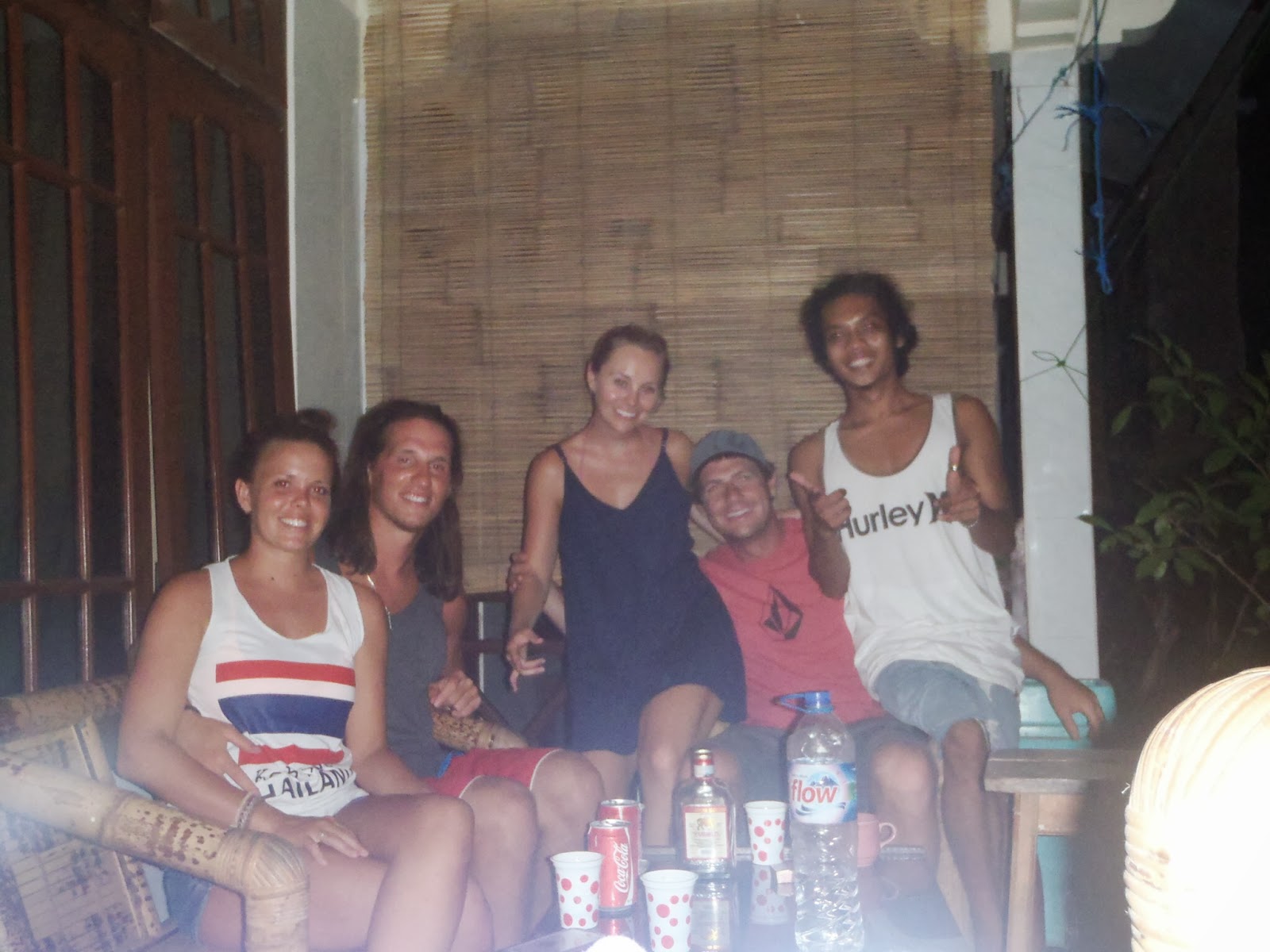 Our next day on Gili T was quite an adventure. The four of us rented two kayaks and set out to sea, hoping to kayak to all three islands. 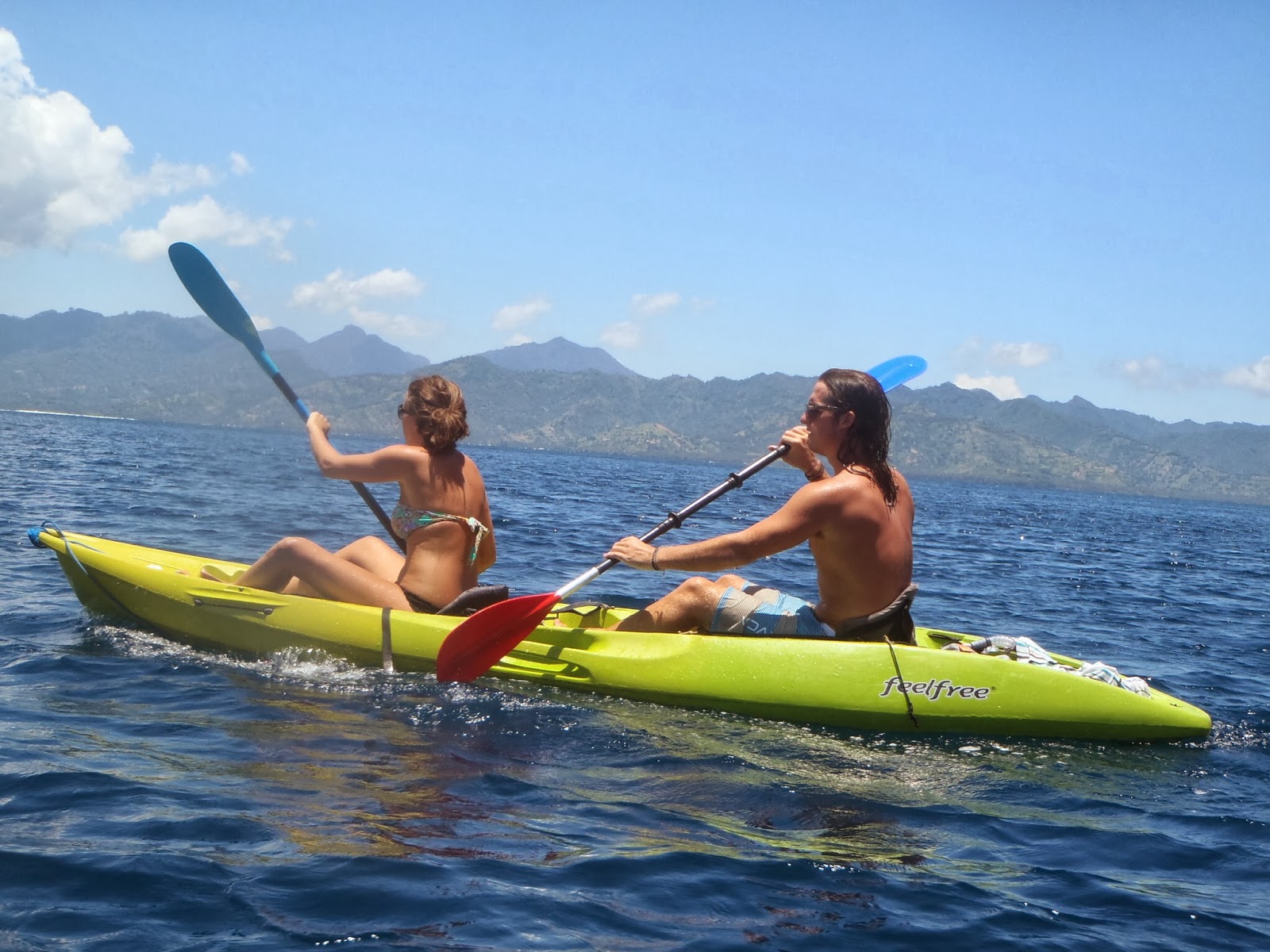 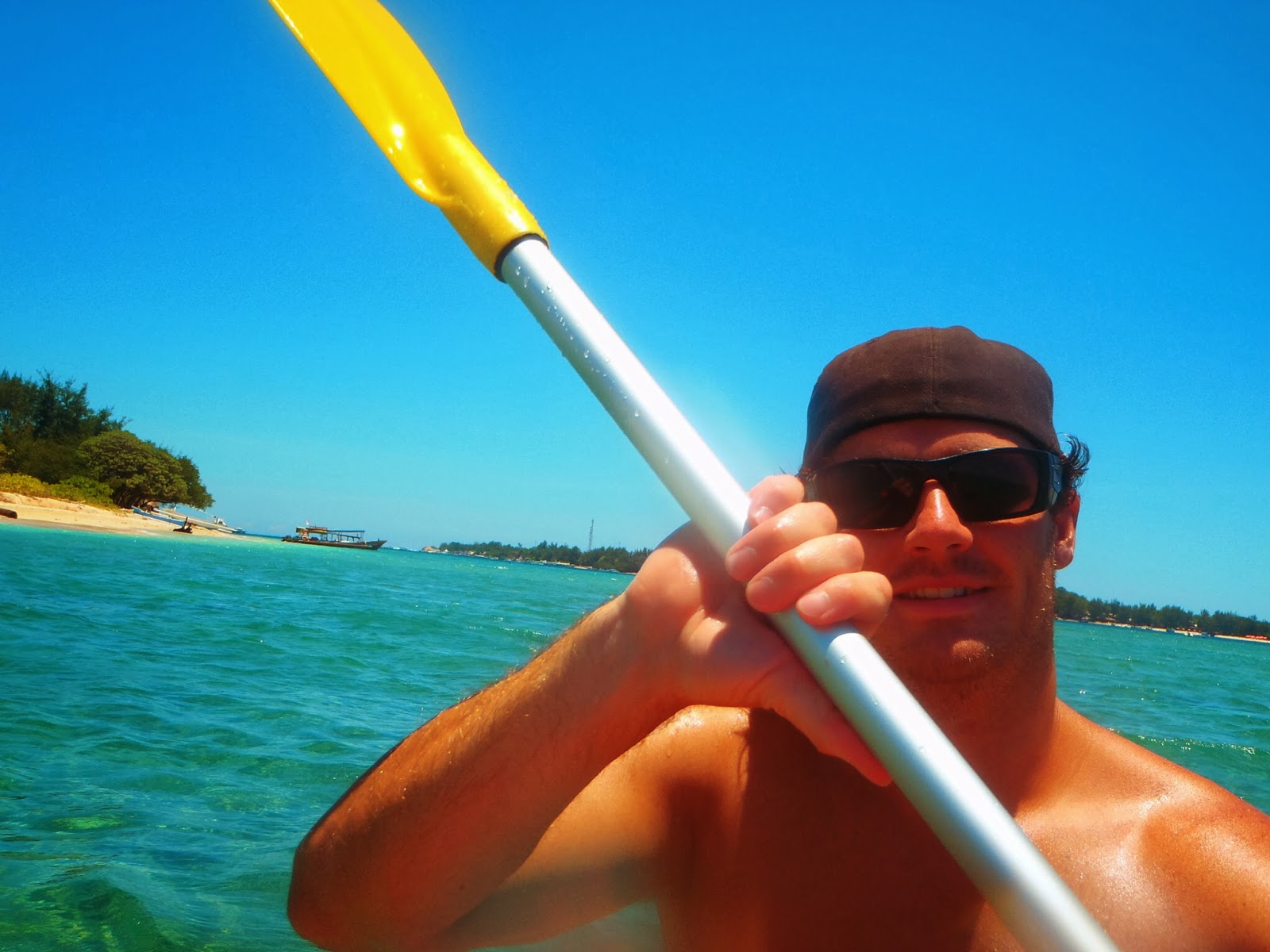 Well we made it to the second island, gili meno and stopped to check out the island, walked inland to see the "lake" and little village then decided to stop for lunch. It took chelsey 2 large bintangs until our food came (which is a long time, since I drink beer slowly).. So because lunch took a while, we figured we wouldn't have time to make it to the third island and all the way back before 5 (closing time)..we decided to kayak around Meno and head back. It was gorgeous calm, green/blue water.turtles and fish around us. 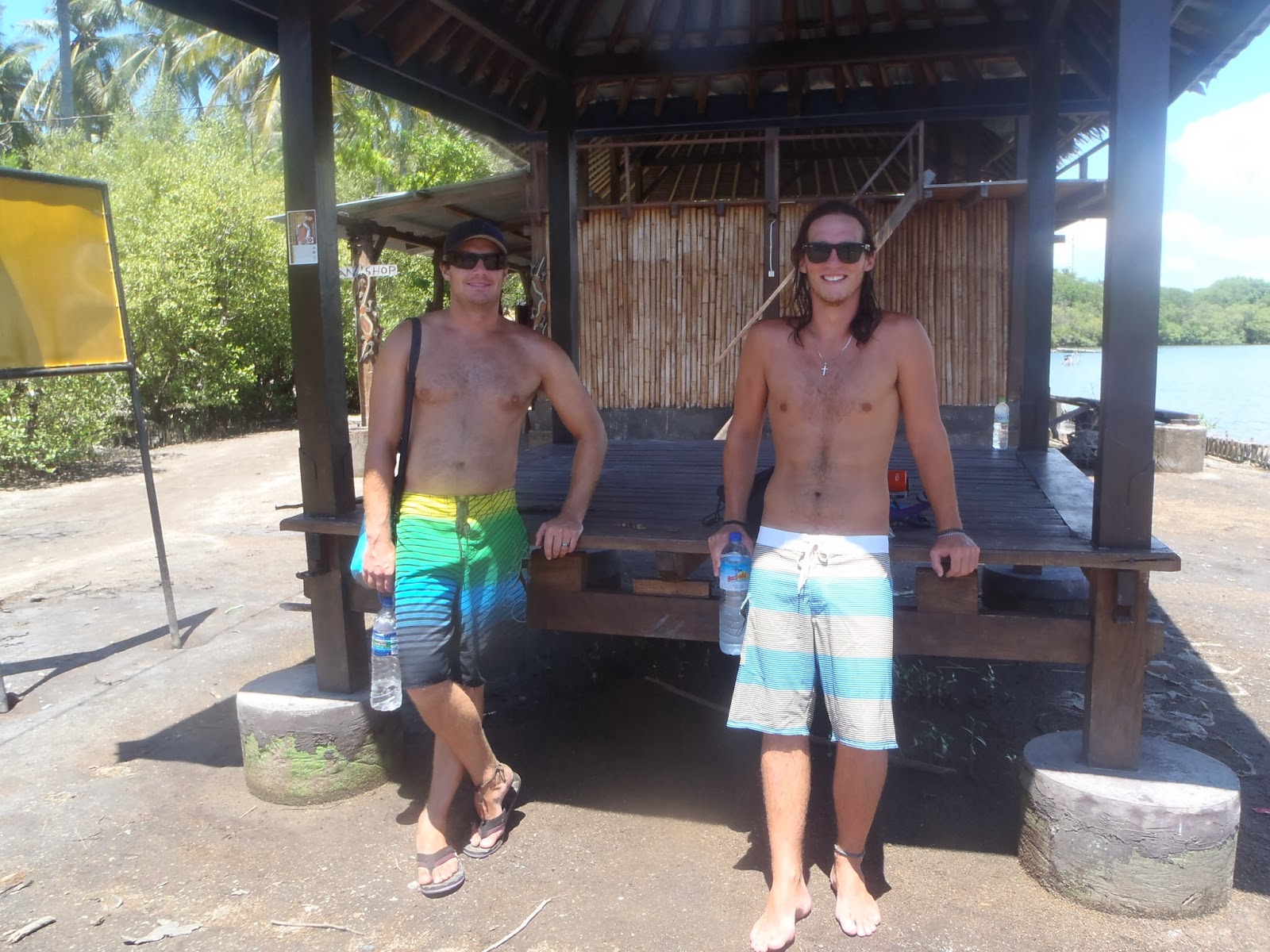 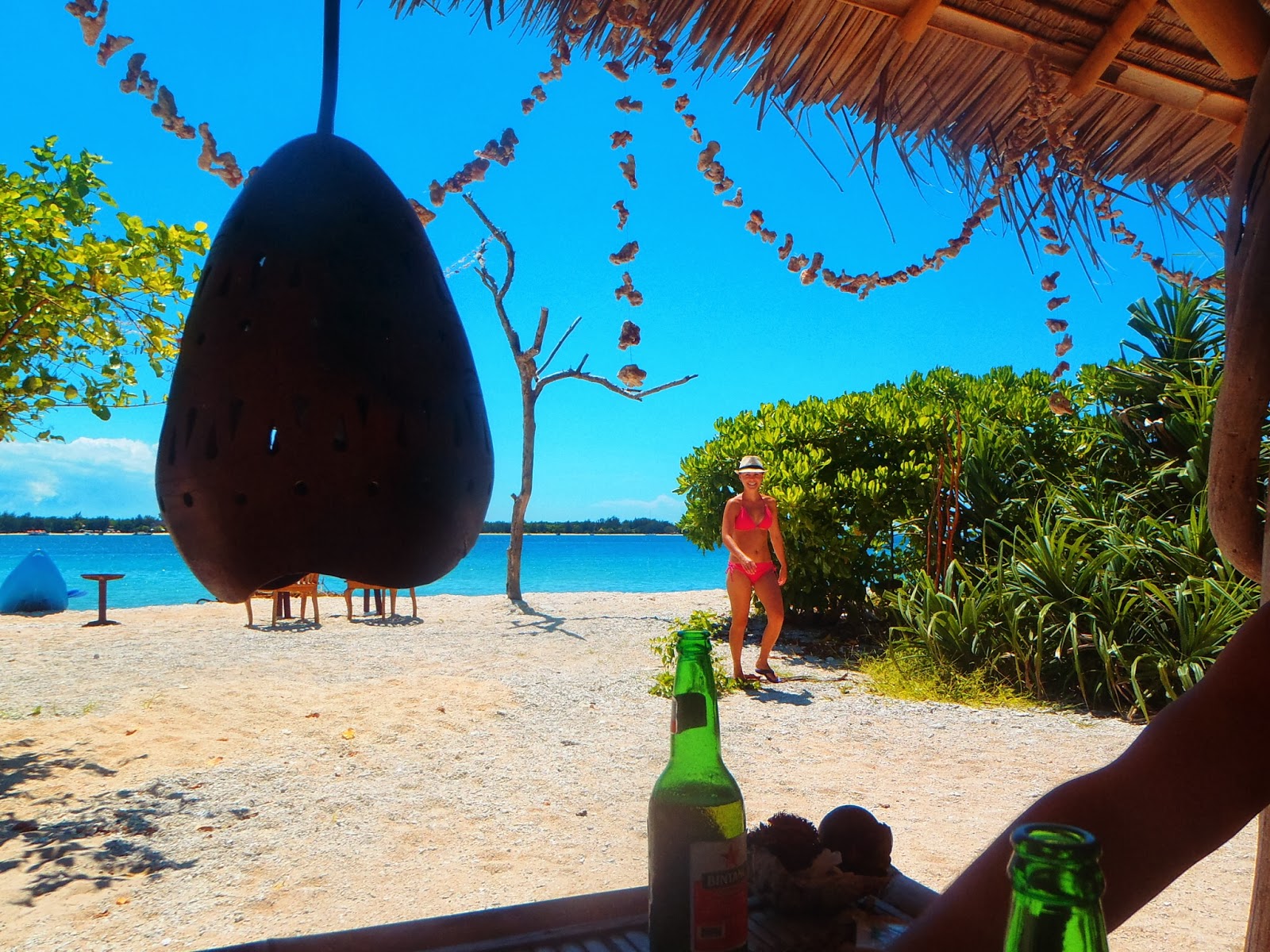 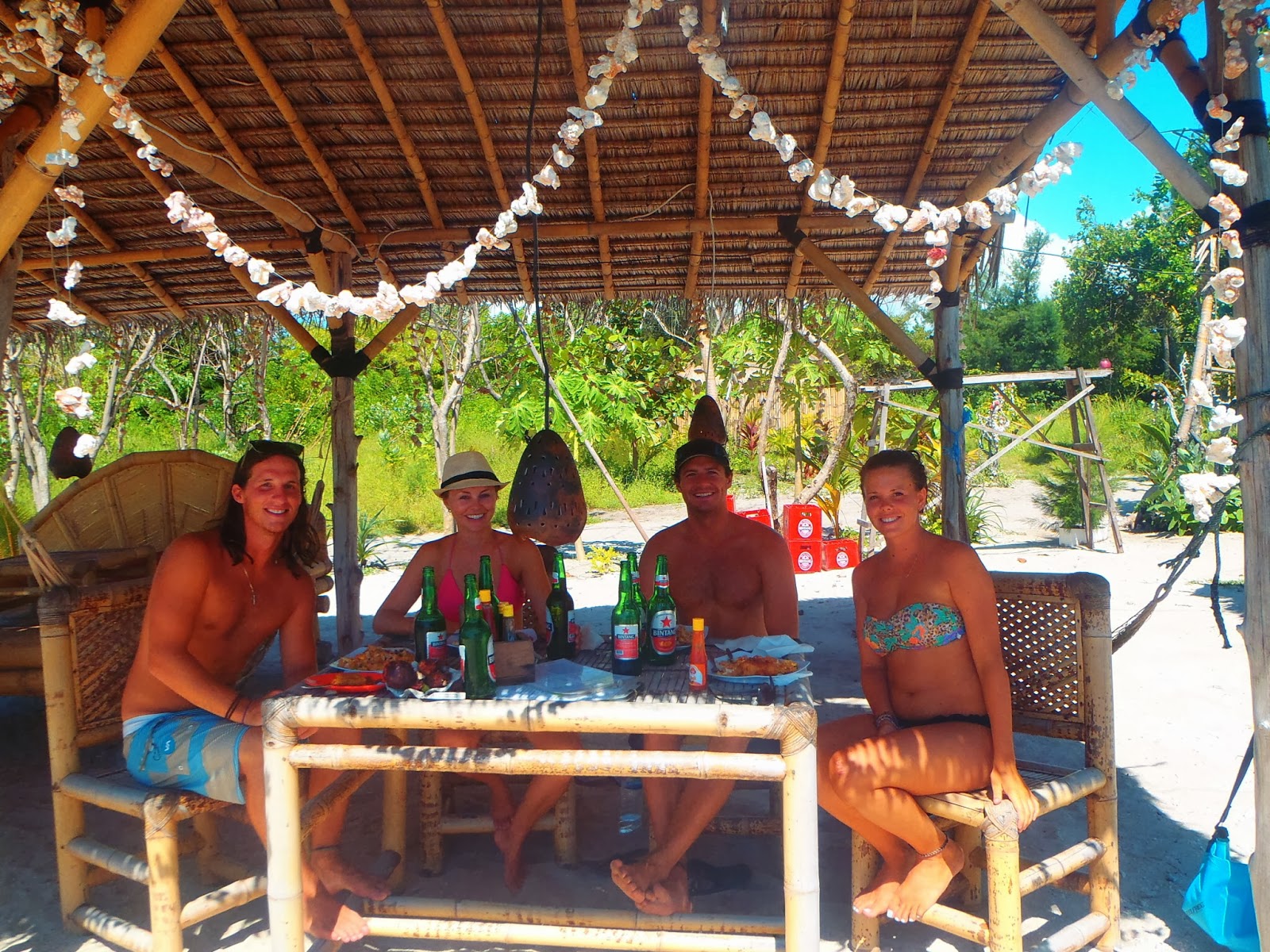 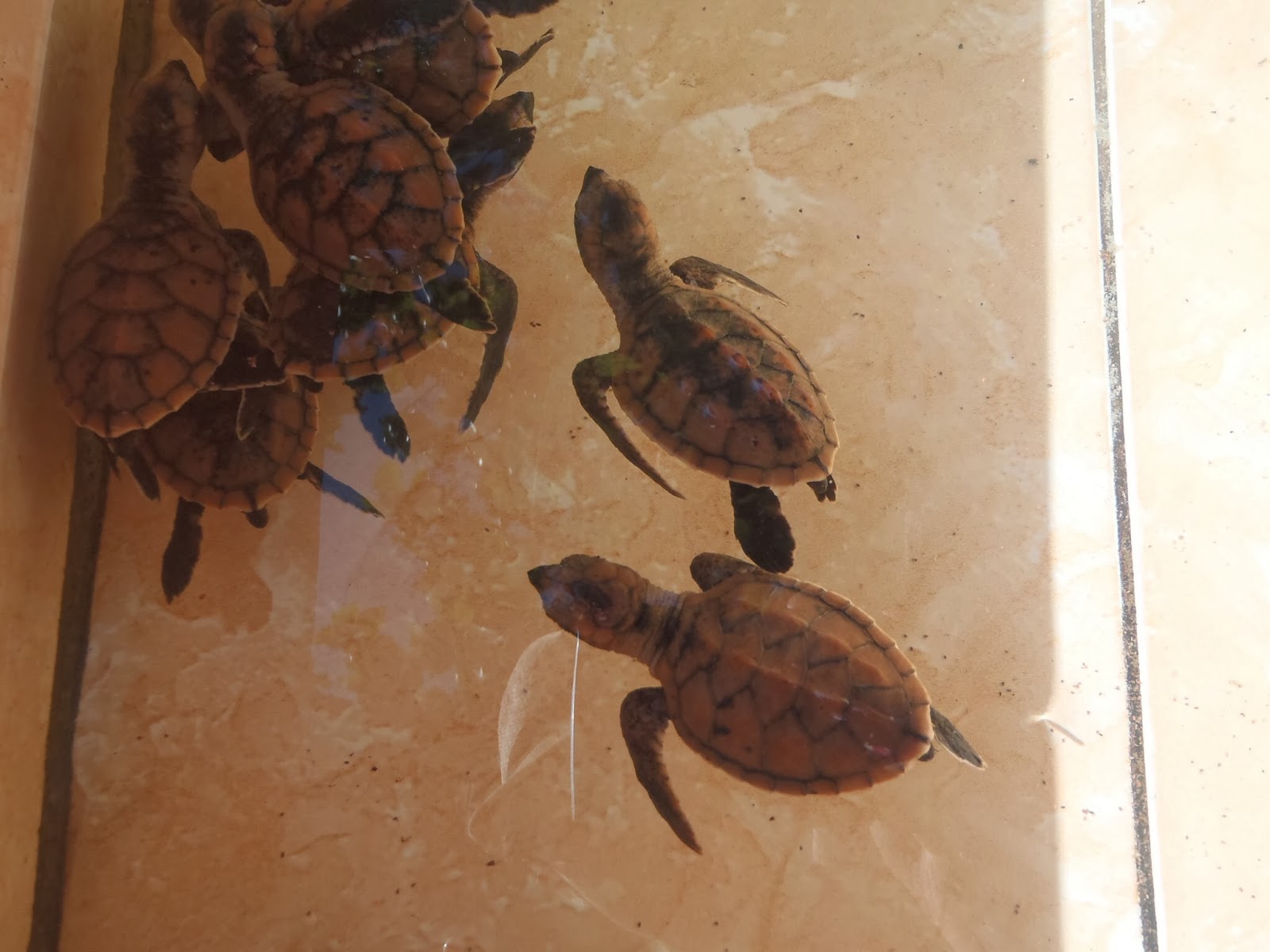 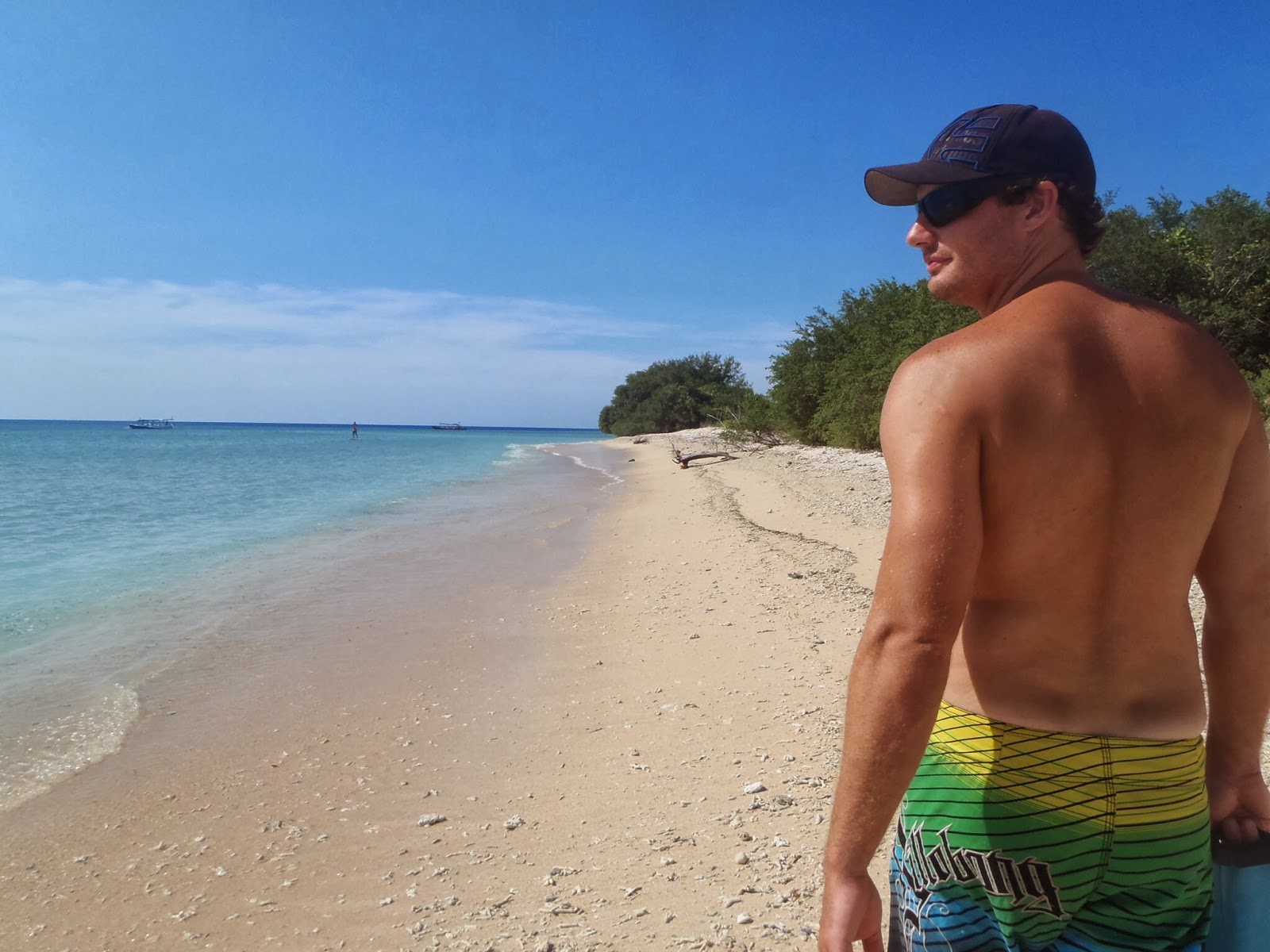 Then we hit the south part of the Island and immediately thought "crap! Look at those waves...were doomed" ...from calm waters to waves big enough to surf on..yikes. Shyla and I thought we should head in to the shore and carry our kayaks past the wavy south tip. But the boys wanted to kayak deeper into the ocean, around the waves. While we were debating this, a big wave came out of no where.. Straight for our kayaks. Within a split second both kayaks were on riding the wave toward shore. It was pretty amazing, very fast and crazy to be on top of a wave. Then like slow motion, our tip began to point down and into the water. Instantly Ashton and I were thrown from our kayak, more like, we capsized under the kayak and into the wave. I recall pushing up on the kayak from under the wave, then surfacing within a second. Ashton was up and frantically grabbing our belongings that were being washed out to sea. Noticing my surprise and slight panic, tanner hopped off his kayak and helped us out, while Shyla gracefully rode the next wave onto shore.


Once back on land, we assessed the damage... A little shooken up but totally fine and now laughing, we were relieved not to loose our camera. My sunglasses didnt survive the tumble, but I'm sure a turtle is wearing them with style ;)

Back on solid beach, the boys portaged the kayaks while us ladies carried a paddle each and provided encouragement.:) After bypassing the south tip of the island, we were smooth sailing back to Gili. T .. 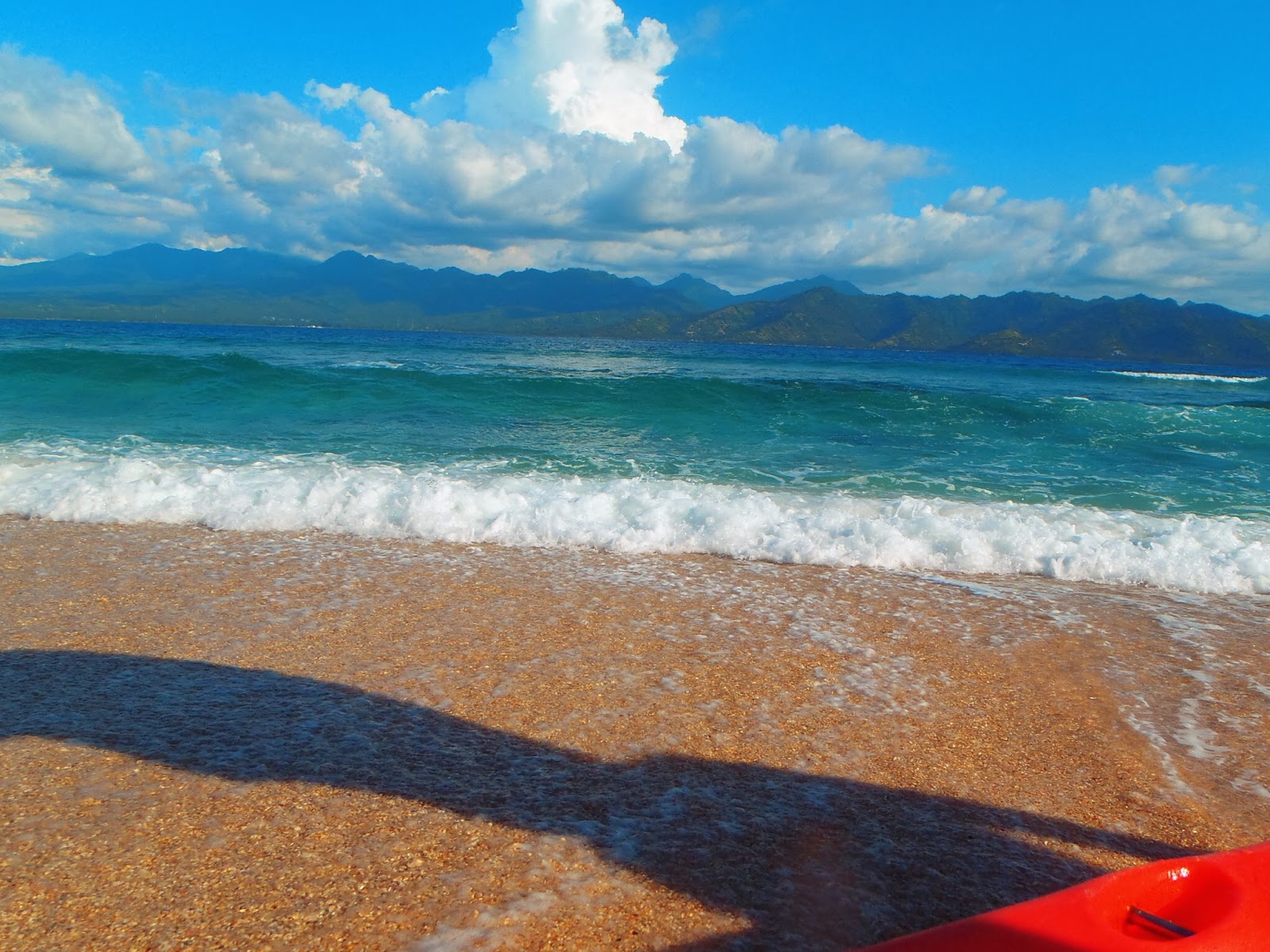 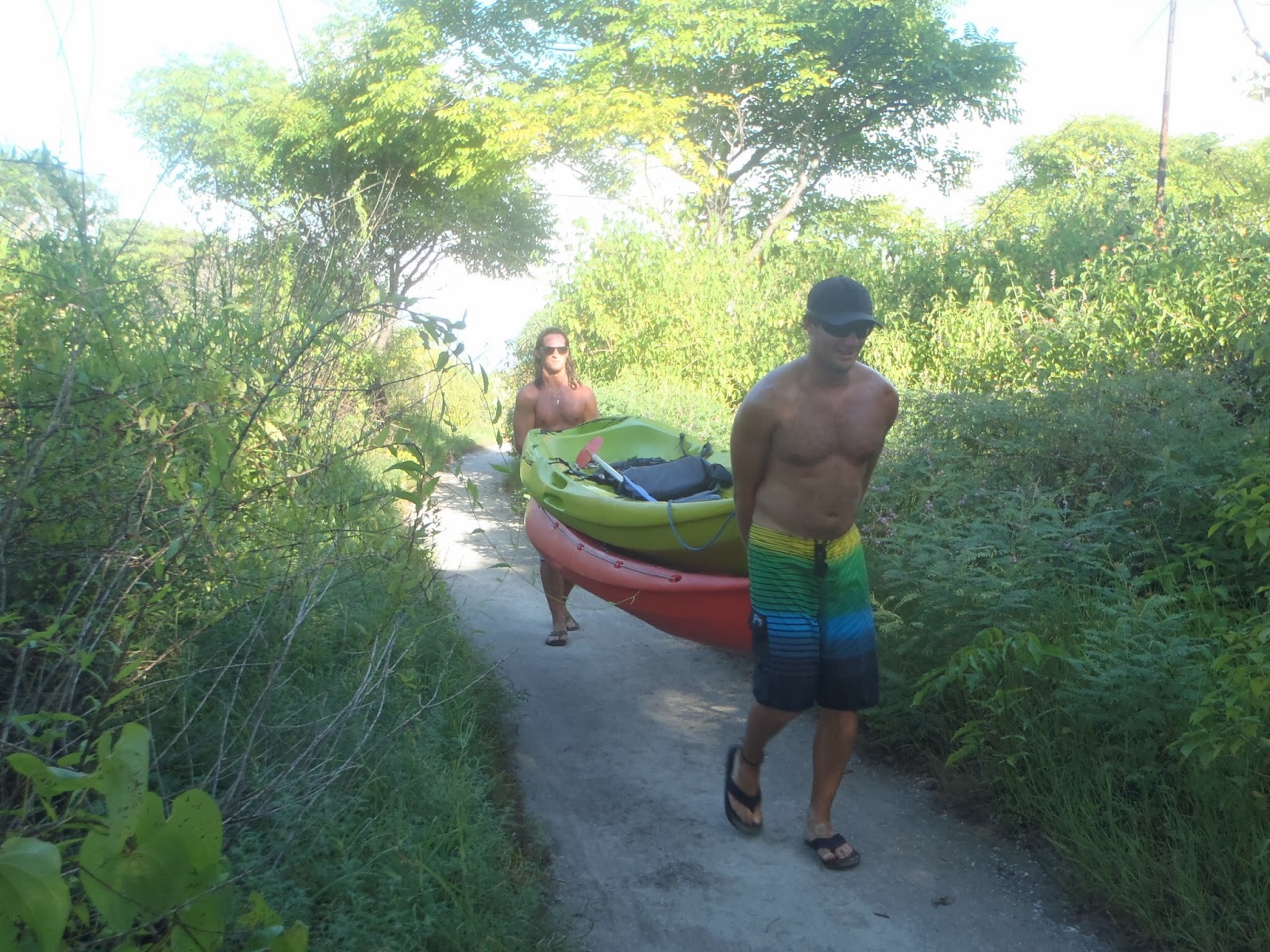 We made it back by 5:15 and enjoyed the sunset still laughing about our day.

Day two on Gili T we all rented pedal bikes and biked around the island, stopping for beer breaks and sunset viewing. Suppers were a mixture of unknown food At the tiny food market. After showering and getting dolled up we played cards and had drinks on our patio, which led to a night out on the island including techno dancing On the beach. 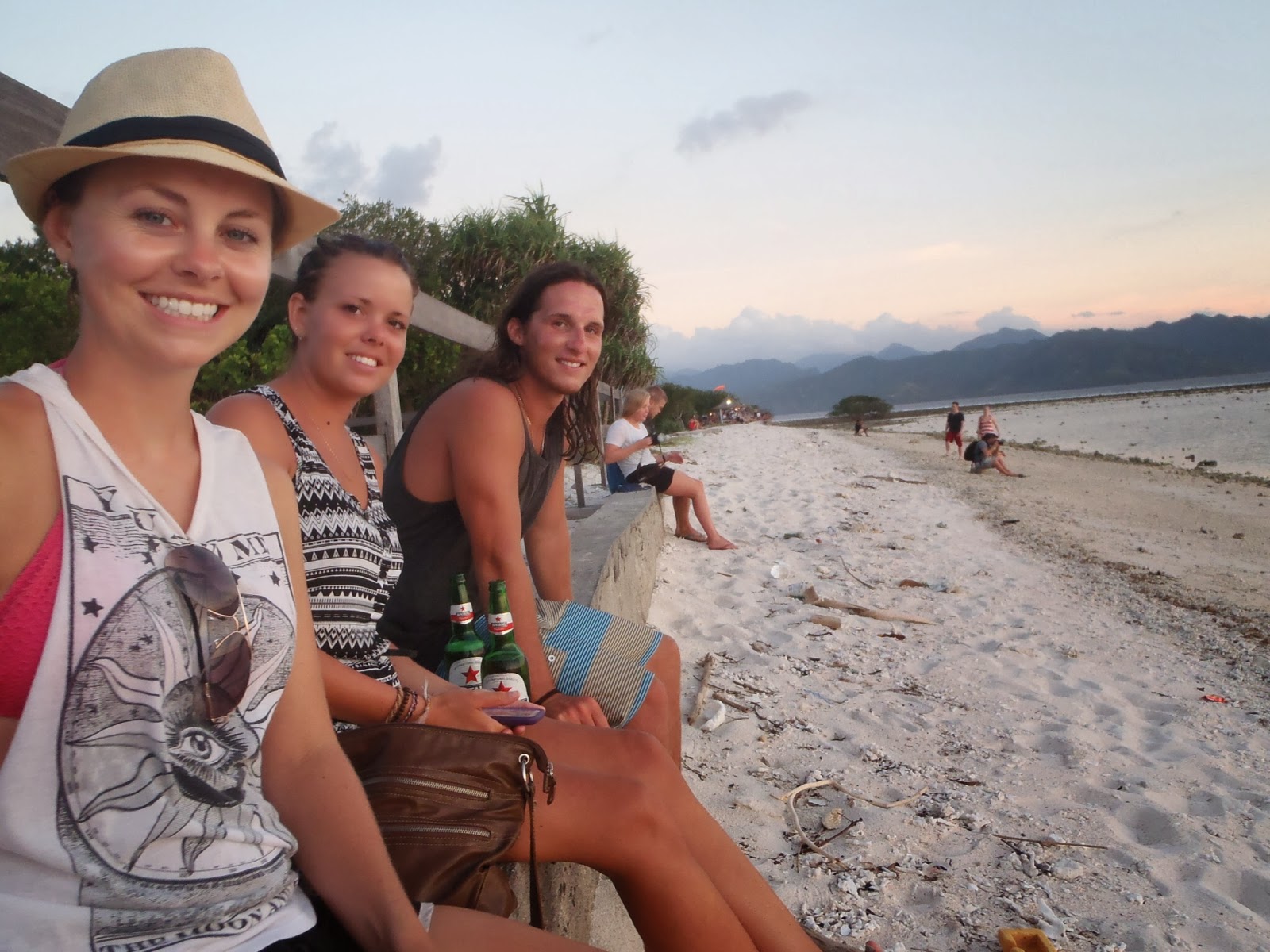 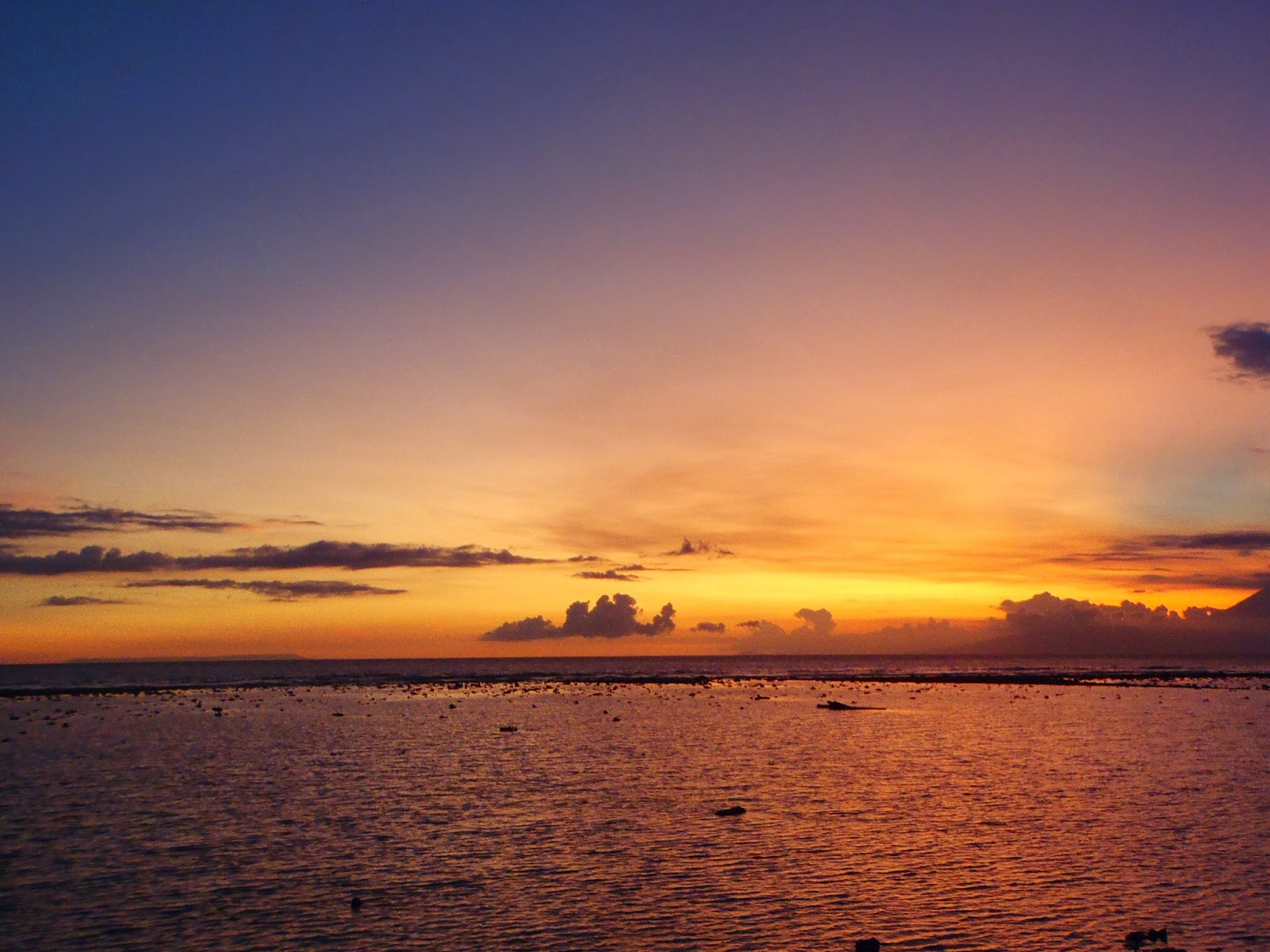 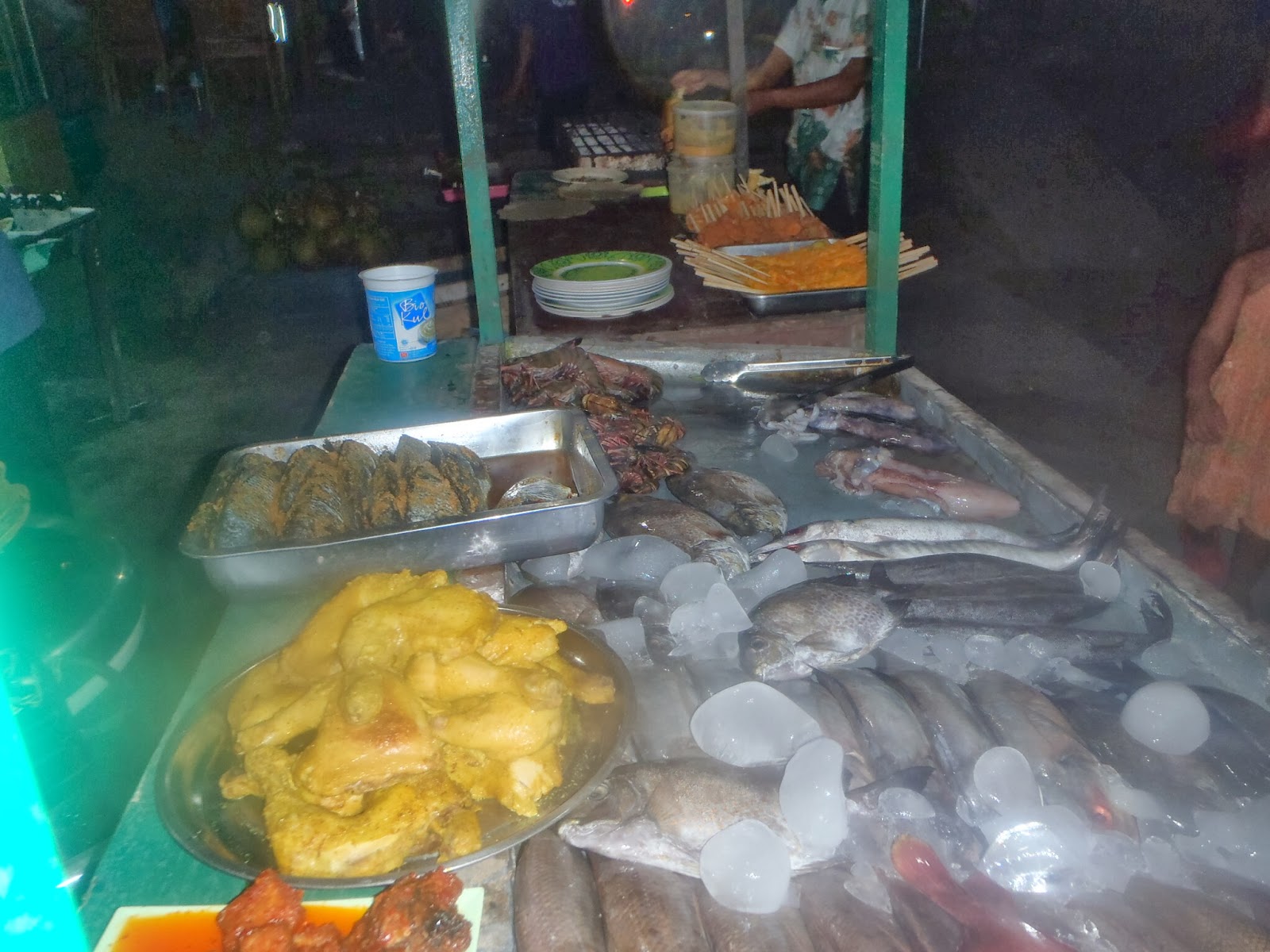 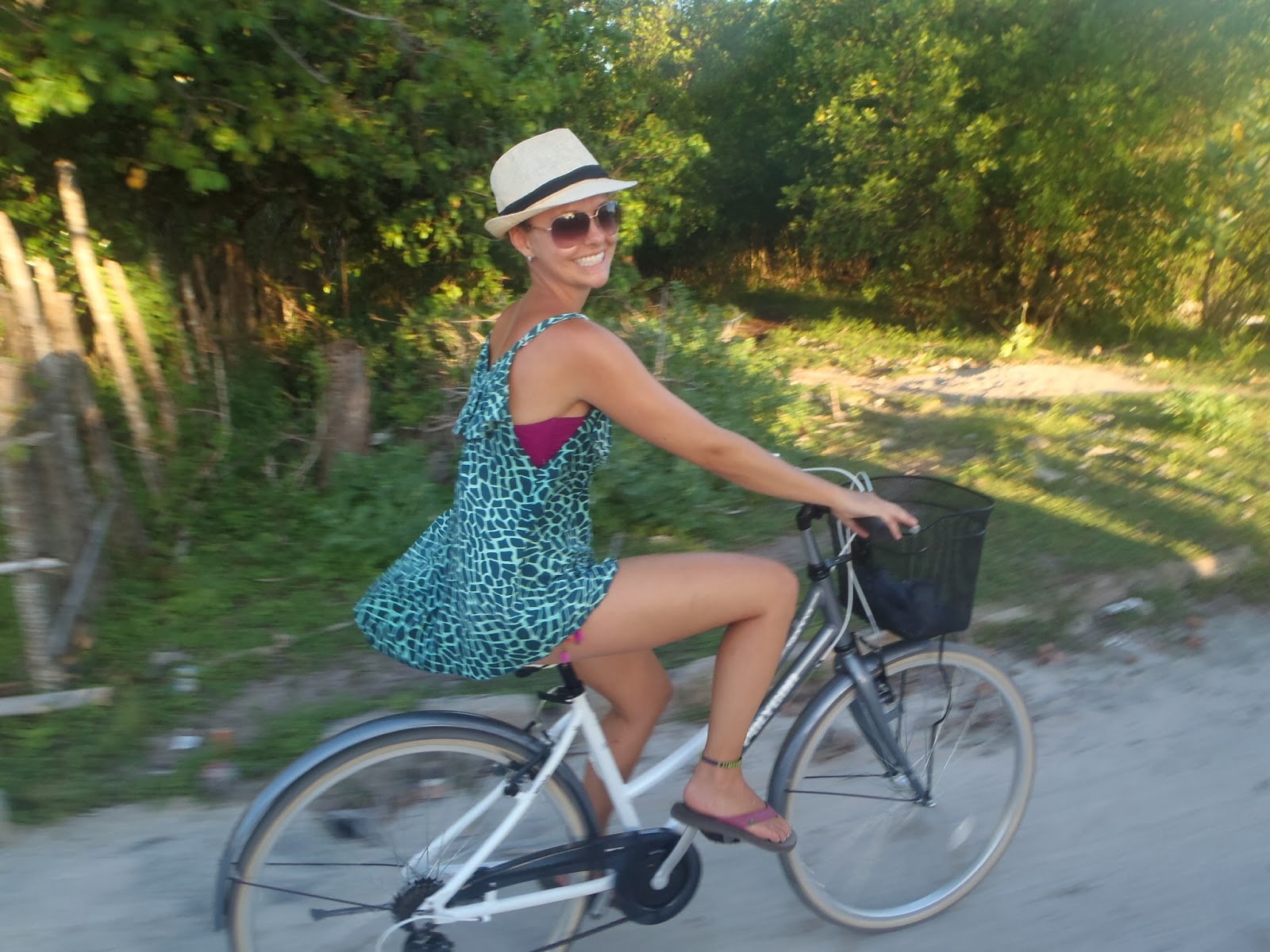 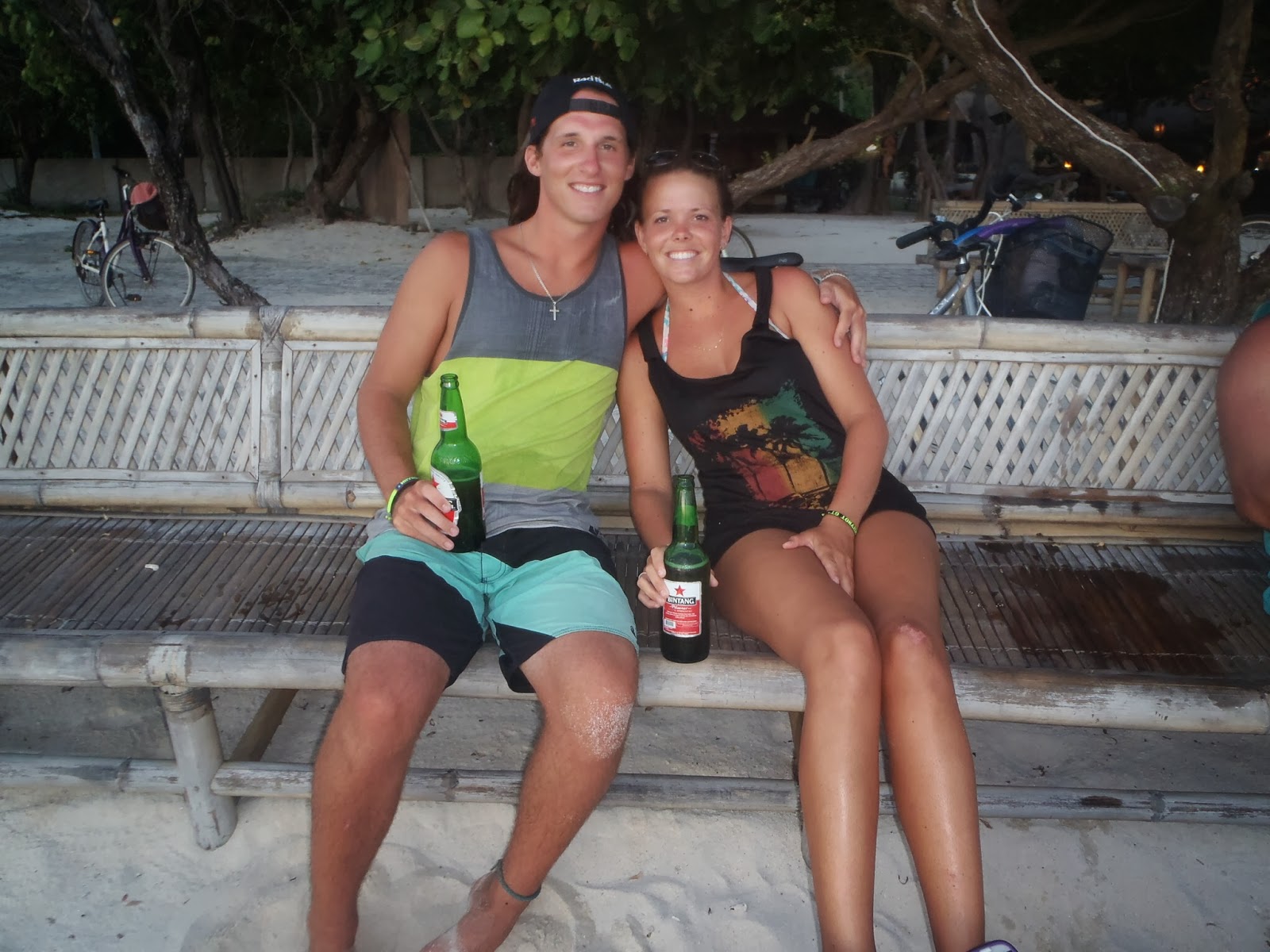 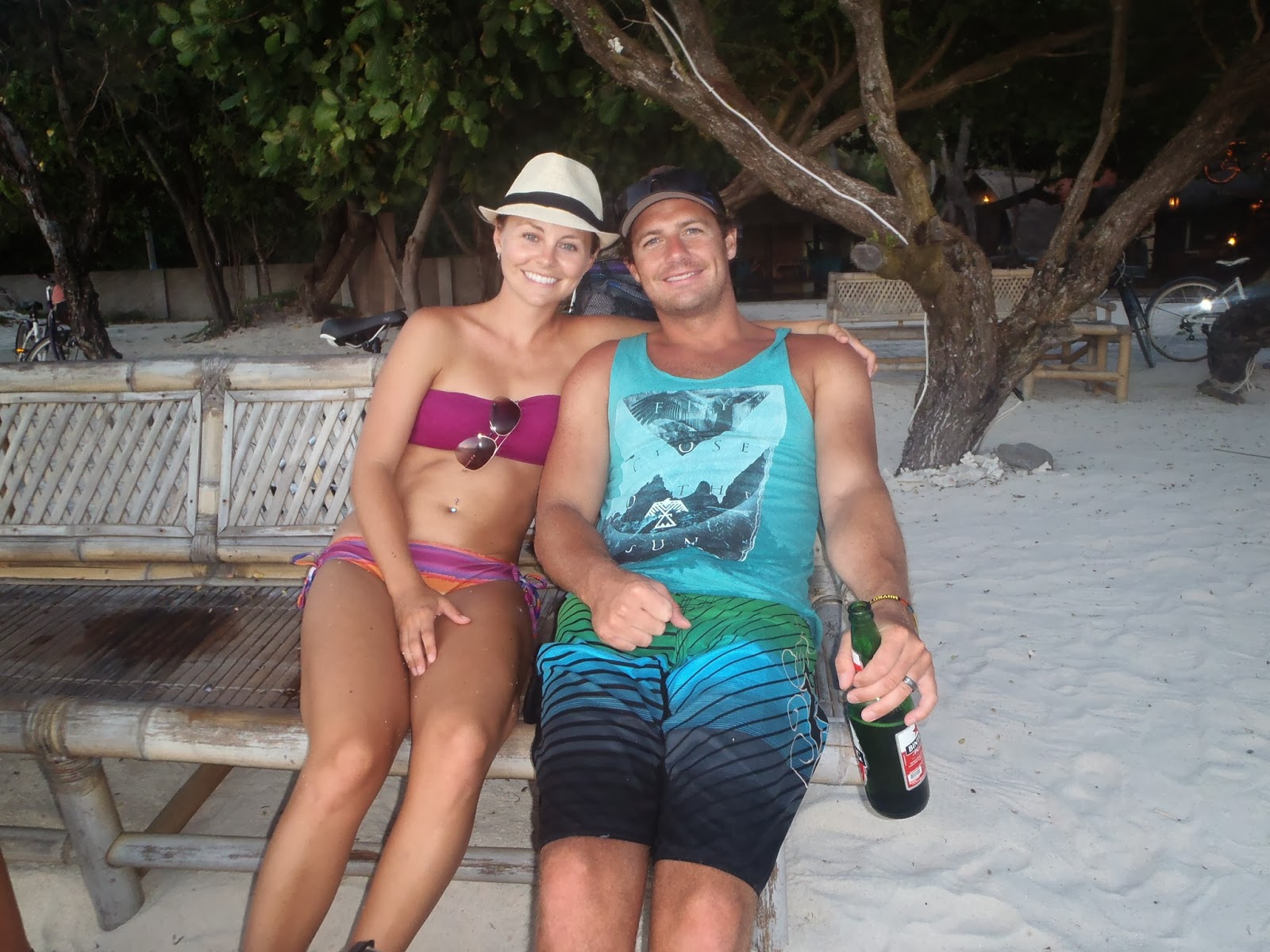 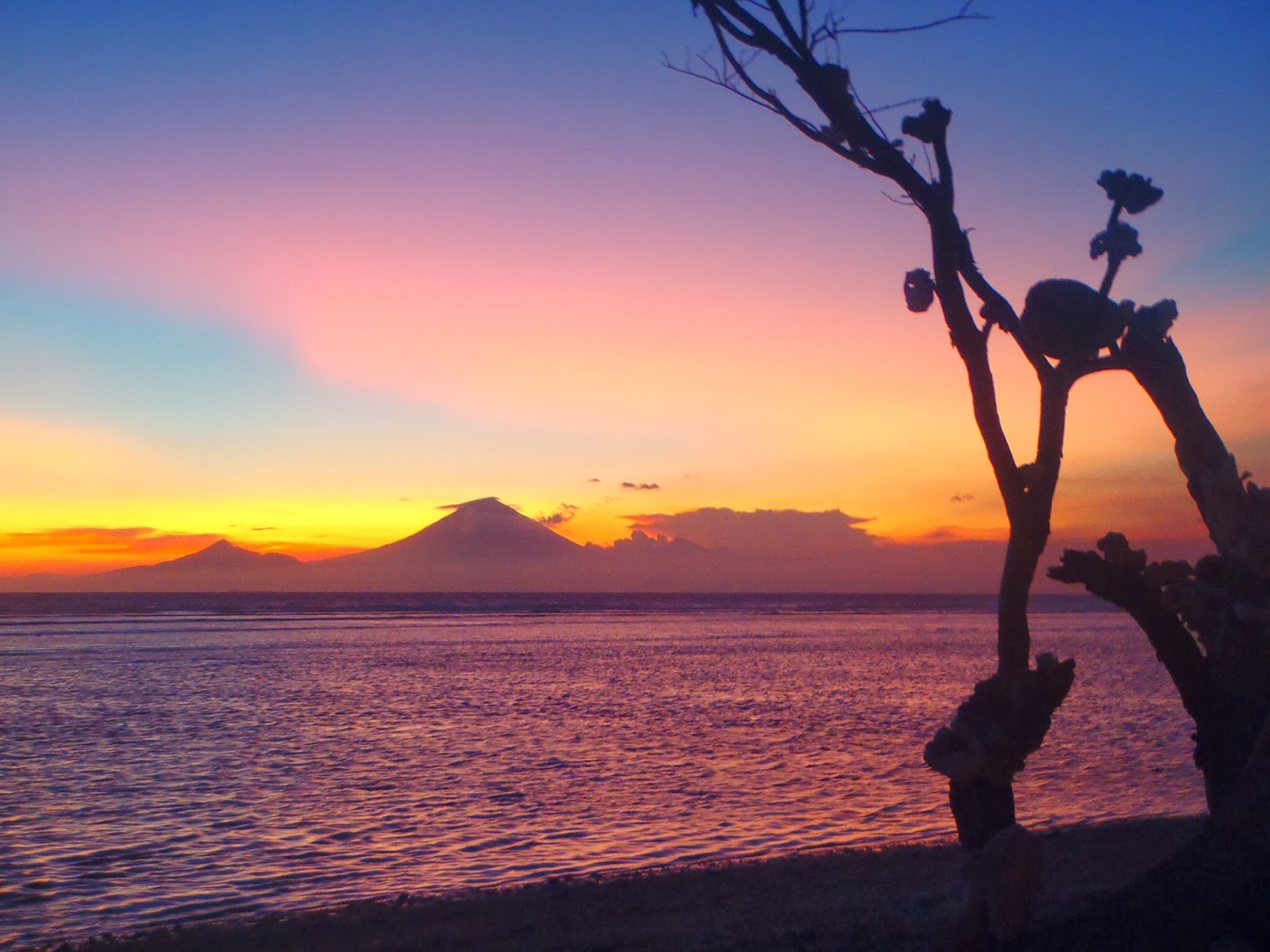 Next day we took a public transport boat over to Gili Air, the "in between" of the three islands. As in, not as touristy and busy as Gili T, but not as deserted and quiet as gili meno. It ended up being a nice mix of restaurants, accommodation, beach and shops.
From Gili Air we went on a snorkel day trip to see graceful turtles and pretty neon fish swimming in live coral. The turtles are huge and would swim up to the surface for air right beside us. 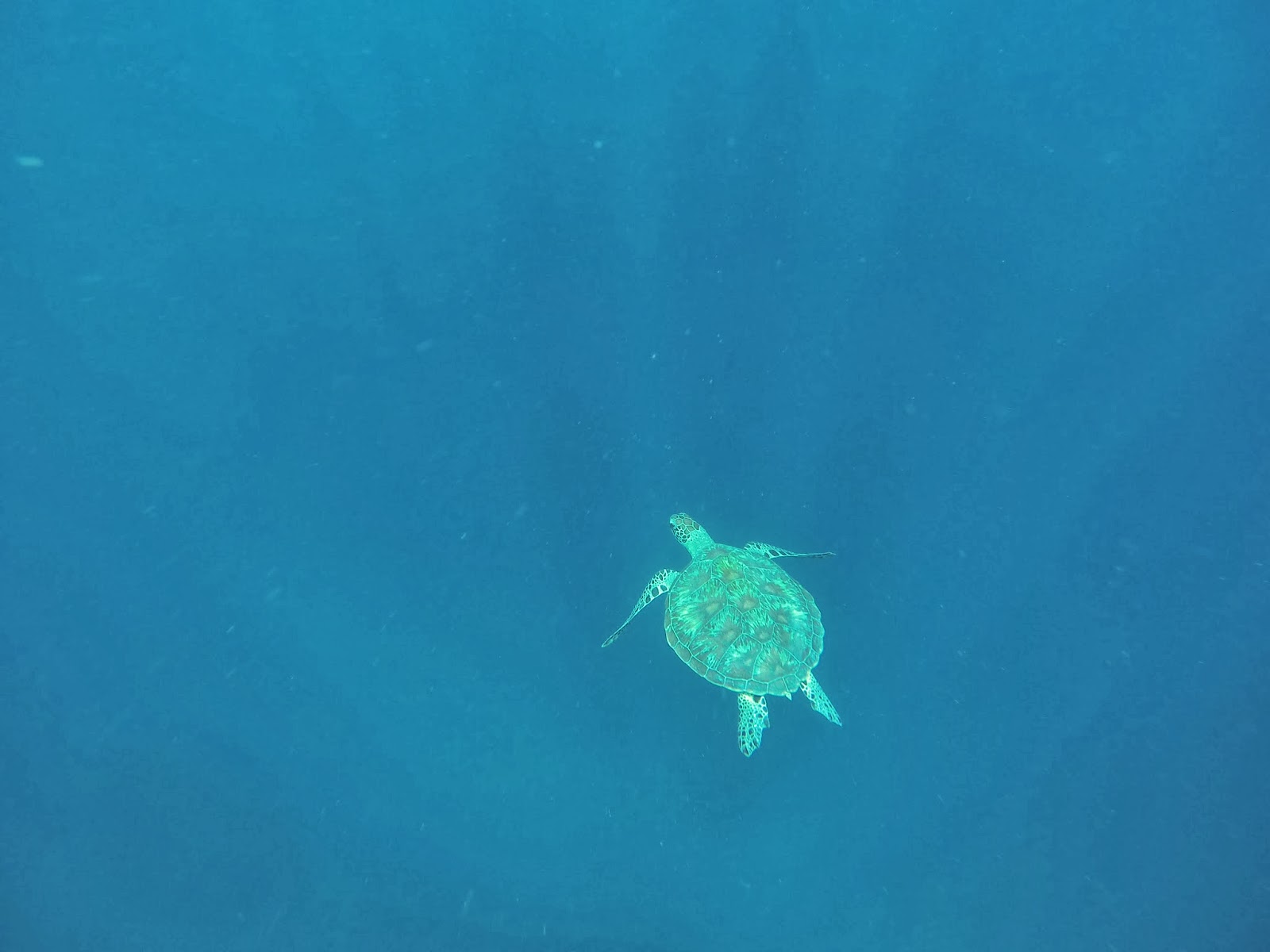 Shyla and I went for a traditional Balinese massage. Amazing! We splurged and paid $12 each for a one hour full body massage. ;)..

In all, we really enjoyed the Gili Islands- stunning green/blue water, nice sand, amazing sunsets, enough hustle bustle to keep a person busy, but quiet enough to feel relaxed. I just love how there were no scooters and no vehicles. Just the sweet sound of horse trots and people laughing.
Next stop Lombok. 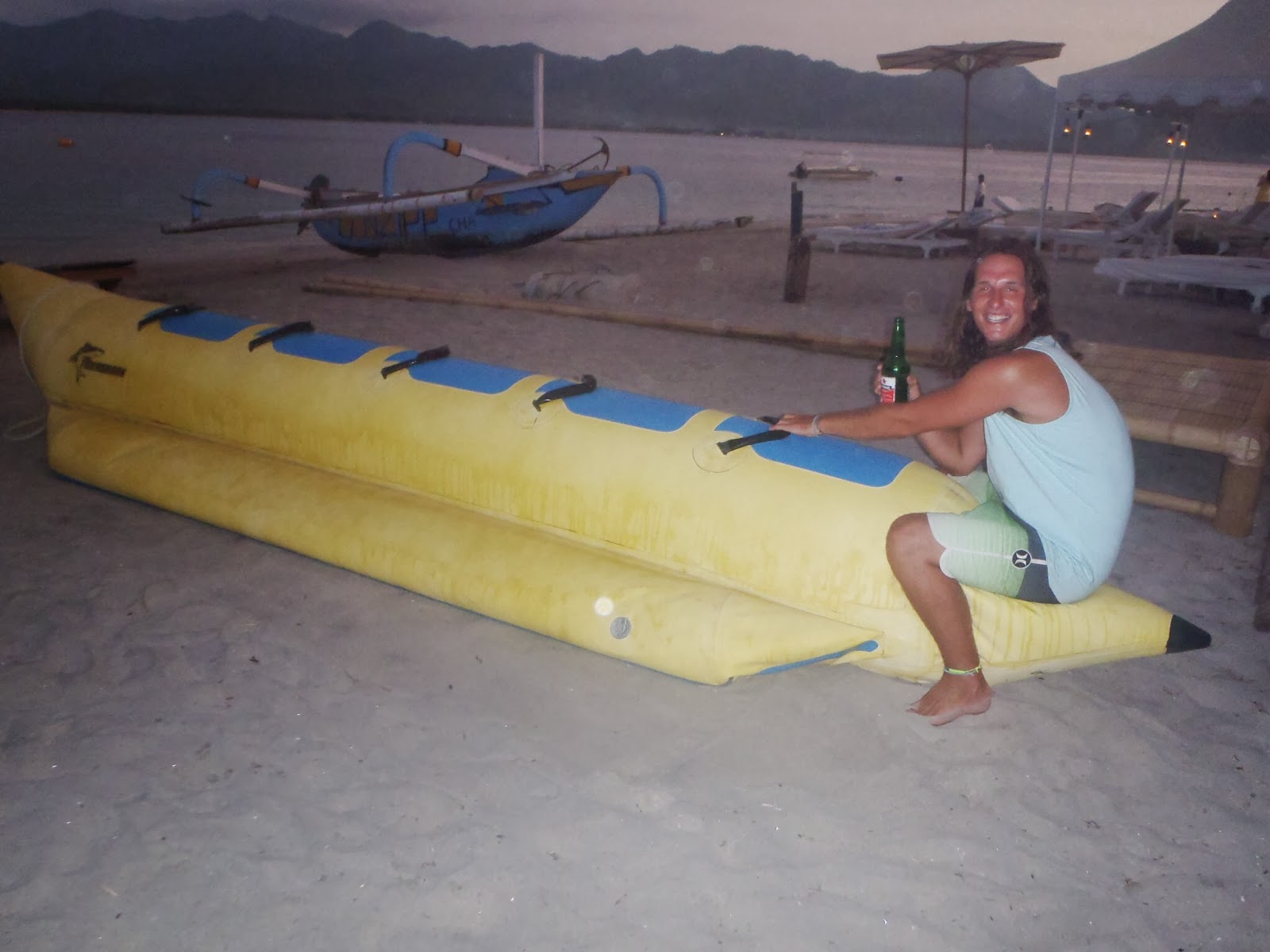