We are so glad you are enjoying our blogs. Obviously we wish we could bring each of you along on our journey,.. But because that isn't possible, we hope you can feel like you're part of our adventures. We would like to believe that through our words and pictures you are learning about a new country-the people, the places, and the culture that makes up the countries we are In.

The photos on our blog are beautiful and it looks like we've been laying on the, beach, chillin by pools, and scootering  around, all the while, drinking bintangs. Haha
..well, yes, we do make sure to get our fill of cheap beer.. But travelling is much more than that. Here are examples of what we don't include in our blog, or what we have deprived you of knowing..

--travel days are long, sweaty, stinky, dirty, crowded, frustrating..
The other day it took us 12 hours to reach our destination.. Ashton booked us a flight for 10:30 am, well a couple days prior he received an email in Indonesian about the flight. We had three Indonesians try to translate. They told us : " flight delayed to 6:00am"... Umm I think they mean, our flight was "changed/bumped up" to 6 am. Lol.. So ya good thing he checked his email.. So luckily we got on the right plane at 6 am, then arrived in a city and took a taxi to the train station, which was LOUD! Announcements overtop of announcements and whistles and trains and people trying to sell things. Ah. Ashton stuck his mouth through the hole at the ticket window and spoke broken English, showing his phone and map of where we wanted to go. Finally the lady on the other side smiled and nodded her head. (I think she was more laughing  at Ashton, cuz if she had moved forward an inch, she could have kissed him, ).. Again, it was very loud. But Ashton prevailed and got us good seats on the train. 4 hour ride. 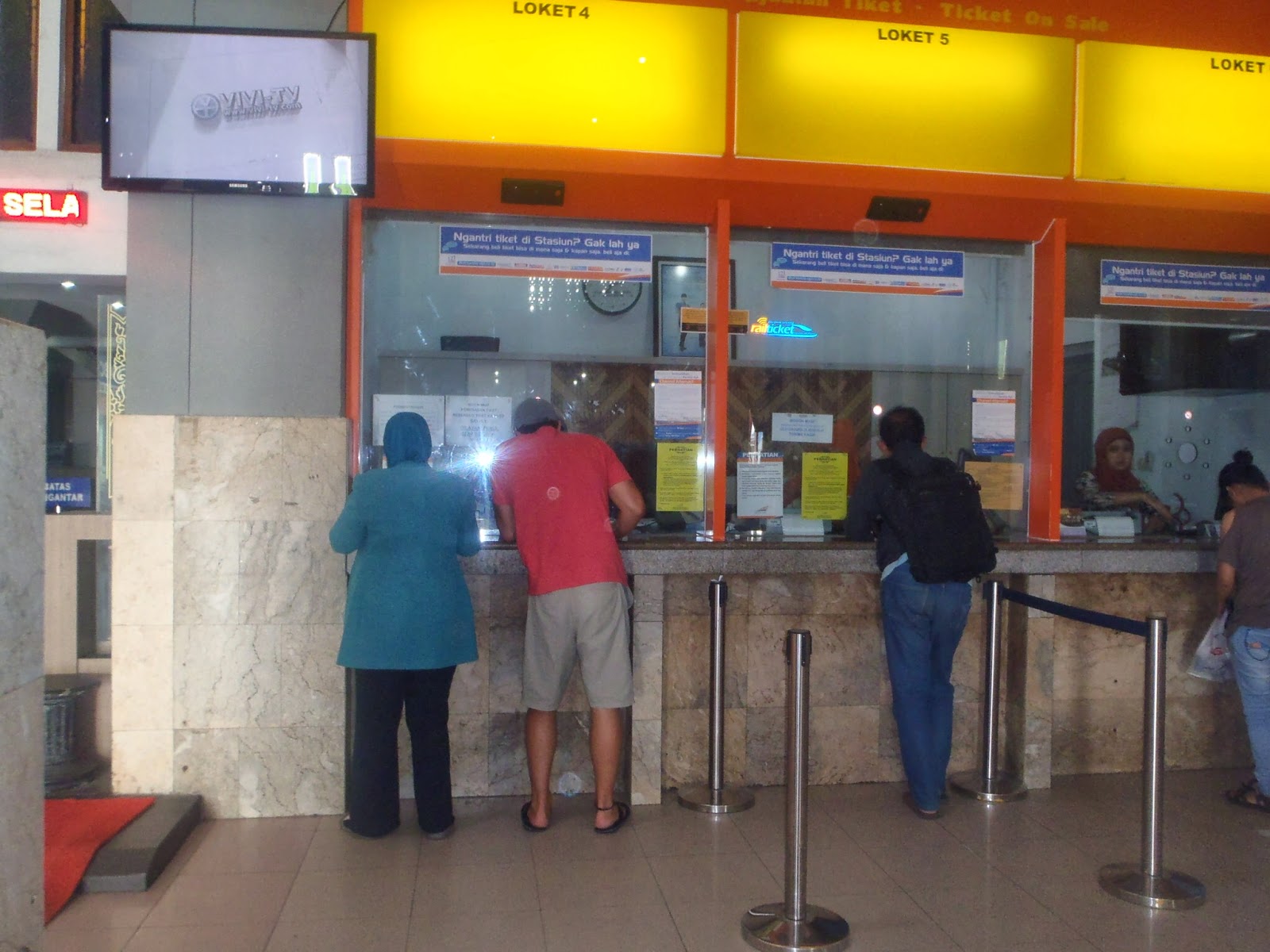 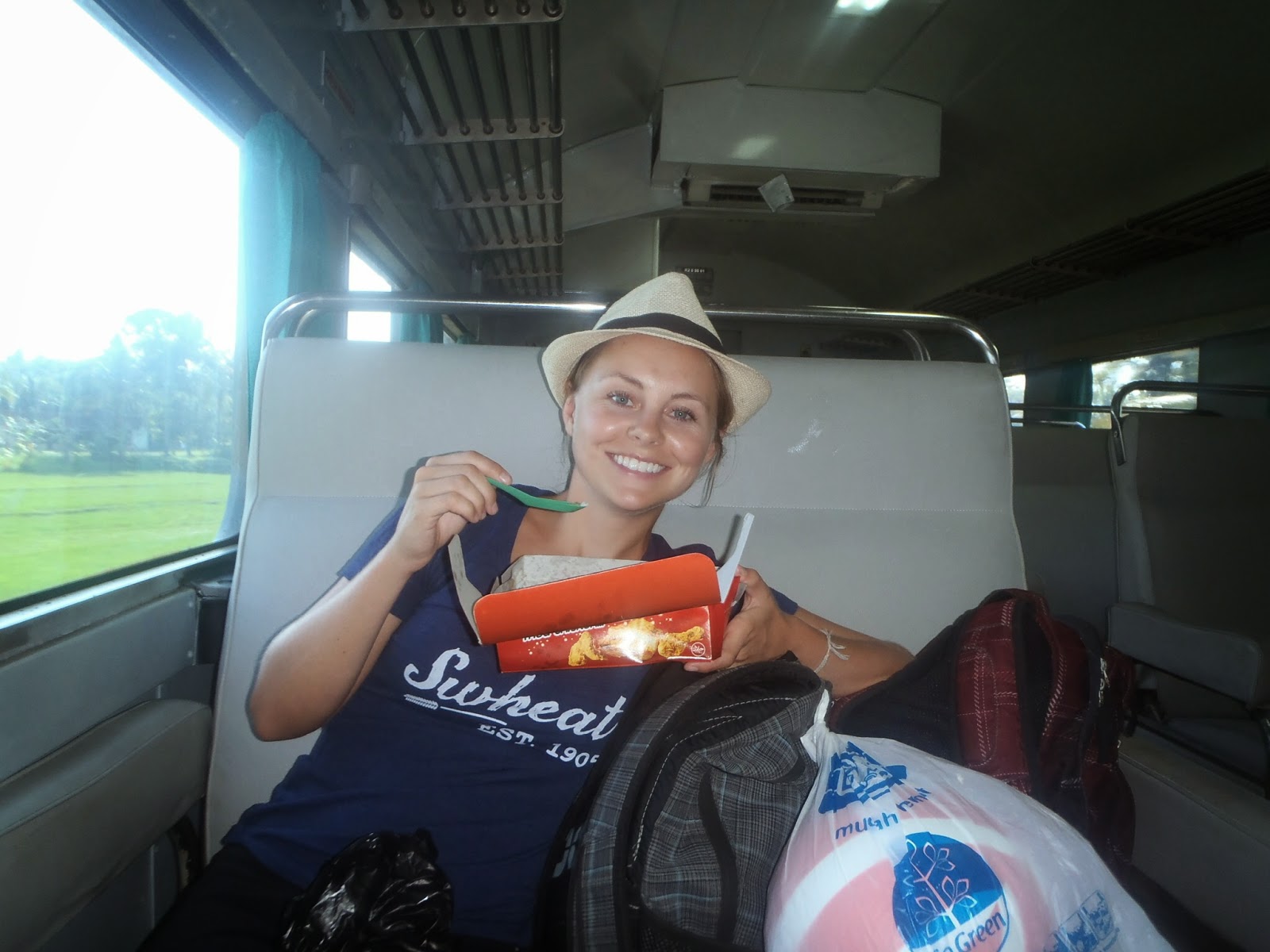 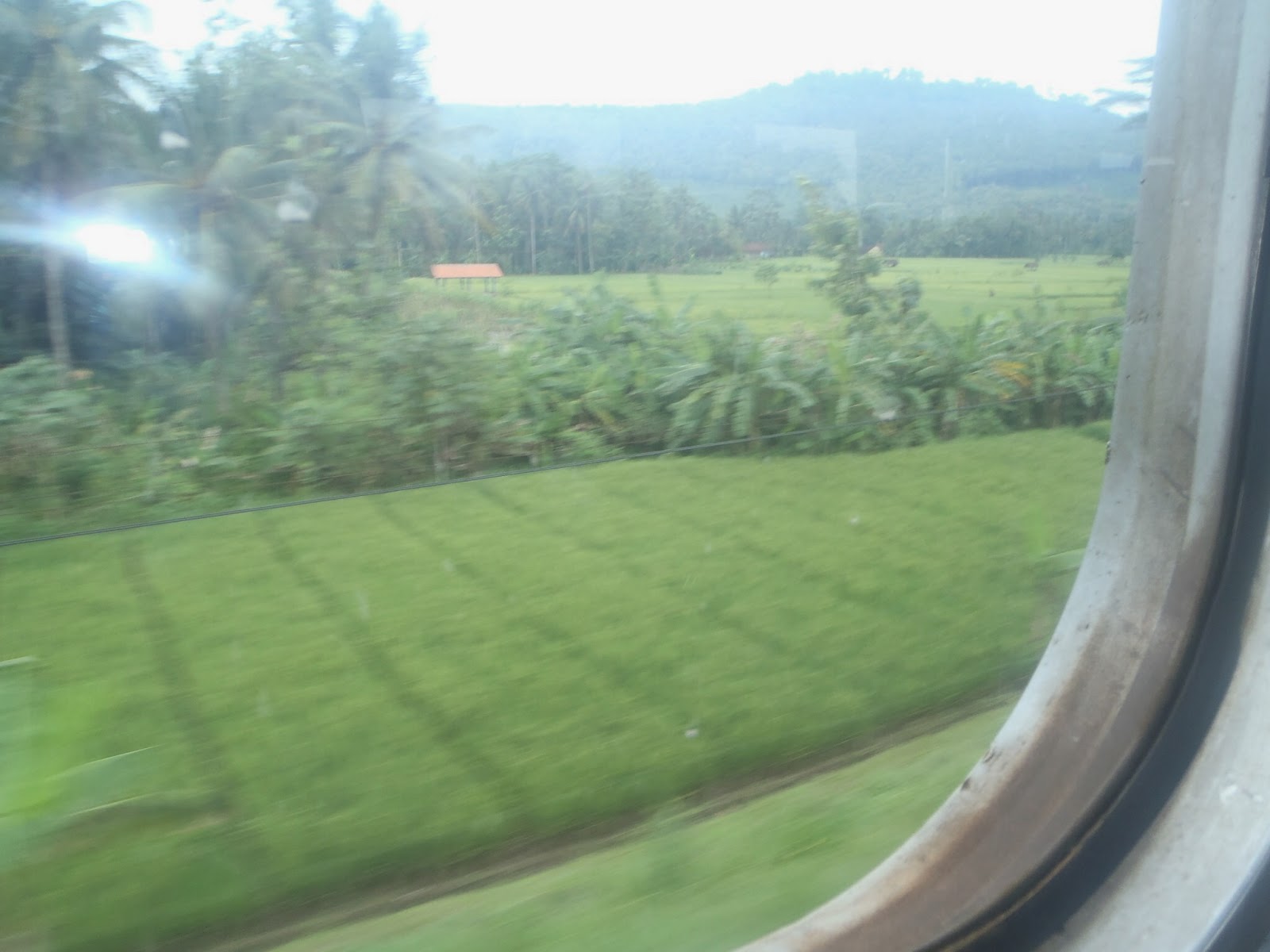 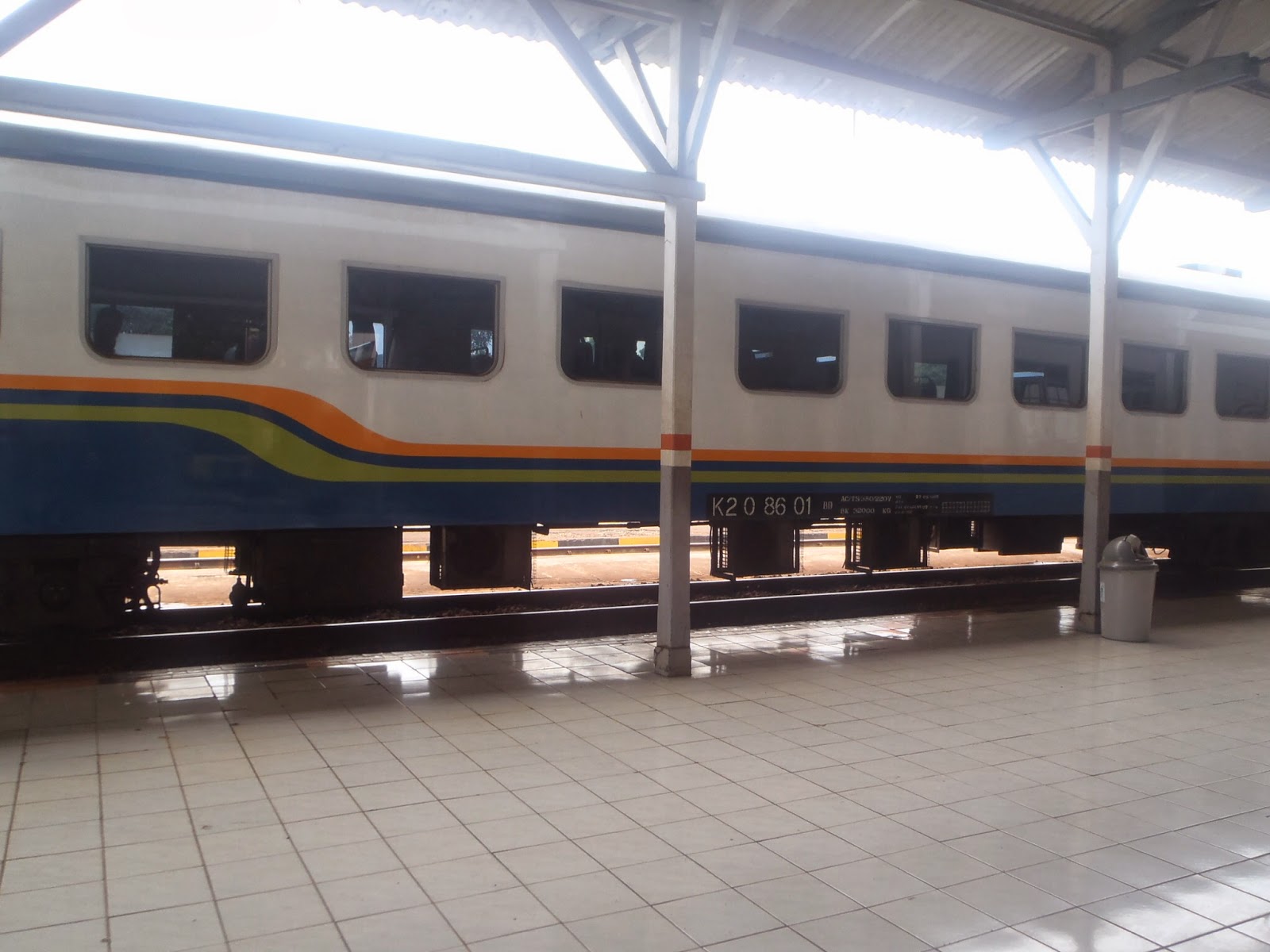 After arriving, we met 3 German travellers who helped barder for cheap transport to the bus station. Upon arriving to the bus station, Indonesian bus workers were all shouting in our faces.." Cheap bus,..only bus to pangandaran,..". It was a little crowded bus that was full of people, ready to leave and was only 5,000 rupia (50 cents) per person. Beside these tiny, cheap buses were some bigger normal buses that had comfy seats, air conditioning etc. So we ask what about those big buses there? " No, no" .. " they don't go to pangandaran!" We were all hot, sweaty and had enough and the tiny bus was pretty much running us over trying to leave so we said,  Ok okay! And hopped onto the tiny, crowded, smoky bus and after leaving the bus terminal, the guy collected our fare. Well... He then charged us 50,000 Rupia per person. That's $5 per person which is not nearly what the locals were paying, and he originally told us 50 cents. Then a big, fast, comfortable air conditioned big bus whizzed by us. Icing on the cake. We were cheated. So Ashton and I sat quietly and shot eye daggers at the bus worker. only in Asia can you chain smoke cigarettes on a public bus with kids and elders maround and ash your cigarette wherever you want then just throw the butt on the floor lol the second
hand smoke was a nice touch to the smell that was already lingering in the bus. 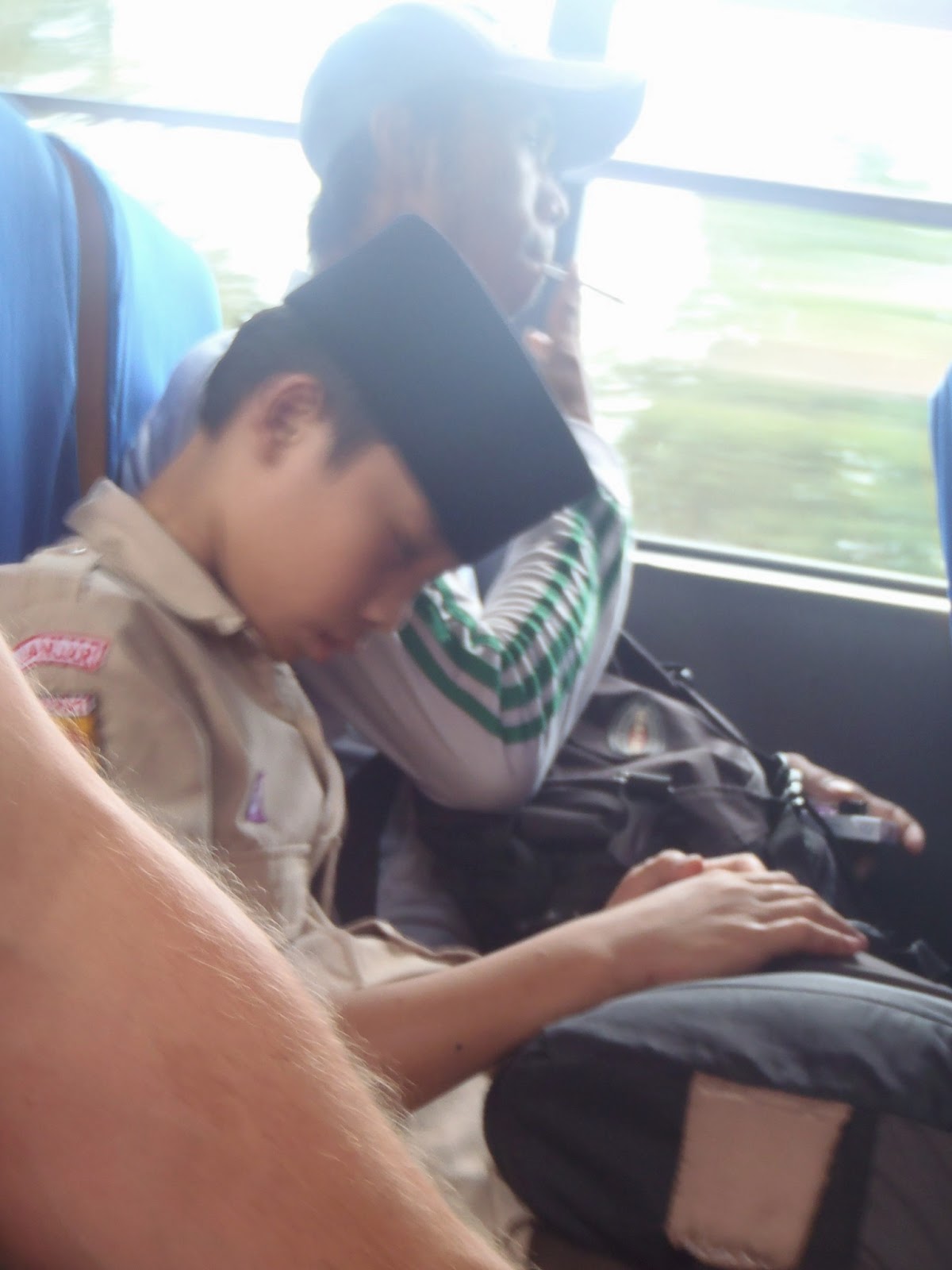 We arrived 2 hours later, and 11 hours since we left our hotel room. We followed the Germans to the hostel we too wanted to stay at. And guess what? It was Full. Ha.. The next accommodation was nice and that's where We are now.

--travellers diarrhea.
It sucks. It happens to all travellers, especially in south east Asia, where fried rice and fried noodles make up the traditional meals. Who knows how clean the kitchens are, how the food is prepared or where the ice came from, along with who knows what our stomach is trying to digest... So ya we spent 4/5 days with upset stomach and diarrhea. Gross, yes but it's Part of travelling. And when you "really" have to go, guaranteed the only toilet you will find is a squatter which we will explain in the next point.

--squatters.
Hm if I haven't showed you a picture already, I'll make sure to post one soon. A lot of public toilets
consist of squatters.no toilet paper and a 2,000 service chArge. (20 cents) pretty sure they are just public toilets but people claim them and charge others to use them. We always carry our own toilet paper which is as precious as gold. There's never any, maybe a bum gun but we don't use them. You
can't put the toilet paper in the squatter, there is a garbage you throw it into. A squatter is basically a hole in the ground with two foot spots on either side..after you use the squatter, you fill a bucket with water and pour it down the squatter to "flush".. Let's just say I have strong quads from squatting. 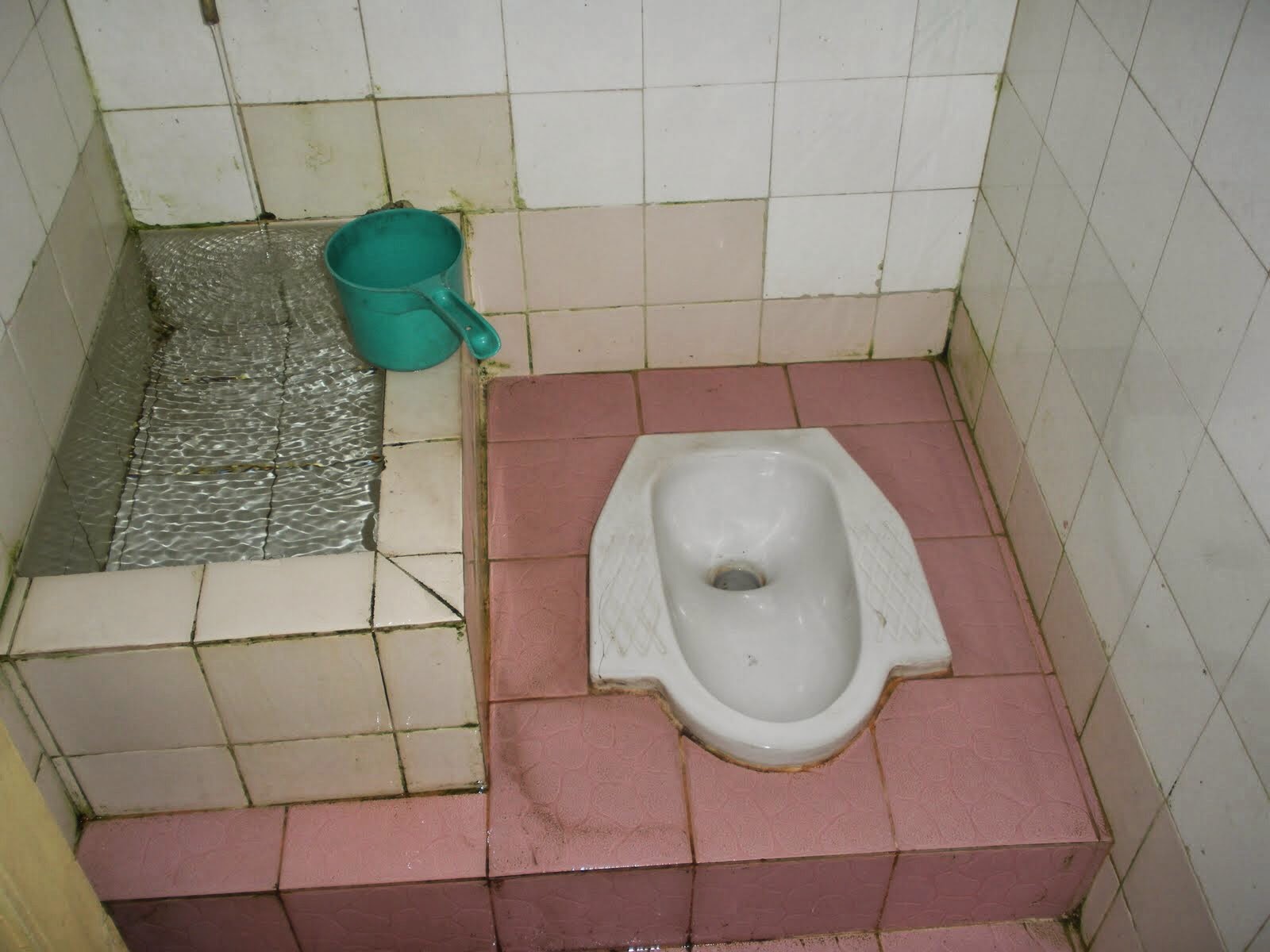 --bugs, insects, animals.
I can get used to the ants, the stray dogs, cats, the geckos, bats, even the cockroaches ... But can never get used to the rats , frogs and bed bugs. Yuck!

--the garbage.
Rubbish. Filth, whatever you prefer to call it. It's everywhere!! So sad!! This country is beautiful,and the people don't respect their land to keep it clean.They just throw their garbage all over the beaches, the ditch, the road, the water..so sad. If it's not there it's being burned.

--bardering. Begging, harassing, selling.
Every day, a hundred times a day we hear.. "Taxi?" Massage! Come look at my shop. Sarong? You can literally barter for almost everything here. Tour tickets, accomodation, scooter rentals, clothes,
taxis, etc, we even got 20% off our lunch bill one day because we were looking at a menu and it was
too expensive for us so we were on our way out to check out another place when the server came up to us on the way out and said ok I give you discount. So you always have to barter and walk away and they follow you saying ok " morning price" or "sunset price" but "only for you my friend, good for you and good luck for me."Argh

There you have it, some of the things we deal with on a daily basis in order to enjoy the nice beaches, cold bintang and the beautiful scenery, as you have viewed on "Our Backpacking Adventure"