A Rat in the Mansion

G'day Mate!  What im about to share with you is by far the oddest sequence of events that has happened to us while travelling. Be warned.. There is graphic content ahead .. It actually all began back home when Ashton told his (50yr old) coworker that we were going to be in Australia. His name is Tom. Tom suggested that we meet up with his brother and sister in law, as they would be living in Australia at the same time and it would be really great if we met them. As it turned out, we were heading to Sydney and getting tired from the long couple days of driving. During the days, Tom and Ashton had been emailing back and forth, but now Tom was more adamant that we meet his brother Bob. ..in the meantime Bob began to make contact through emails and phone calls. (Now were thinkin " we must be pretty awesome people because they really want to meet us".. Lol..) Well anyways Bob assured Ashton that we could park our camper van outside his place and sleep for the night before entering busy Sydney...(so what the heck).. We needed sleep and thought we should probably actually meet this "Bob" and his wife. Still, at this point, we had no clue what to expect, all we were relying on was that Ashton's coworker is a nice guy who would not lead us in the wrong direction. .. So we followed Bob's directions and ended up meeting a white haired, Hawaiian shirt and khaki pant wearing 60 year old.


After brief introductions, Bob said "my wife and I are currently having supper with friends, but you're going to follow me a little ways out of town and get set up for the night. Then I'm going to come back here and leave you for the evening. We will go for coffee in the morning. "Oh, we didn't mean to intrude on your plans, we really don't mind doing our own thing or continuing on to Sydney" I replied, "no! Trust me, you'll like where I take you".."i trust you.. I don't know you, but I trust you.." I laughed. And with that we were off, to follow Bob, the posh looking white haired stranger. 30 minutes later we parked our donkey camper van and opened our door to A Mansion!!! I'm talking a 3.5 million dollar mansion on the beach, with each large window overlooking the ocean. "Omg! Your brother failed to mention that you live in a gorgeous home on the ocean. We had no idea! Ha ha.. It's gorgeous here!" (Picture Ashton and I stunned and now feeling slightly embarrassed by our dirty back packing clothes and uh.. Our beloved.. Donkey van!) hah a.. Bob remained stone faced as he watched our reaction and said "You can gather your stuff later, as you'll be sleeping in our place. We don't live here but we are part of a house swap and currently are staying in this home for a couple months. The owner's 21 yr old son lives in the basement. We haven't met him yet but his parents, are quite nice" and with that, Bob toured us around the mansion showing off the plush furnituRe, outdoor patios, and Buddha decor. (At first we felt like we walked into Indonesia, but after awhile the elephants and gold Buddhas were a little overdone).."here's the laundry machine..here's the shower, you can have our room, there is beer in the fridge and the tv is really simple. My wife and I will be back after supper. Don't worry about locking up. The pubs are a short drive away. Have a good night". ..(Ashton and I are still looking stunned and when he leaves we don't know what to say to each other except laugh. "This is strange. A man we've never met just gave us free reign of his place, which is a 3.5 million dollar home. What do we do first?)..


One of the first lessons that Ashton learned about Chelsey.. Keep her fed! .. Or else! Haha So we ran out to our donkey and drove to the nearest take out and liquor store. We picked up a sub and beer and headed back to our mansion...;) (Okay how crazy is this so far? I hope I'm painting you an accurate picture of this situation.. Let me emphasize... A stranger met us, drove us to his 3.5 million dollar mansion on the beach.. Gave us full reign of his house while he was out for the evening...) Part two.. It was 8 pm and getting late, we walked back into the mansion with food and booze in hand. Flicked on the lights and jumped a foot! ..there in front of us, on The kitchen counter was..a RAT! I'm talking a stinky, dirty rat big enough to be a small cat!! This rat was so gross with a long tail and scurrying around. .. Ashton and I both jumped up onto the leather kitchen chairs. We went from being terrified (cuz we both hate rats,) to laughing (of course this would happen to us!) to being mad (stupid rat is taking time out of our night in the mansion). Alright, there is no way we can stand on these chairs all night. .. What are our options... We could call Bob!.. (Nah what good is he 30 minutes away. ) We could stand on the chairs until he come home or the rat leaves.. (Nah we could be here all night.).. So I came up with a brilliant plan.. . Why not bait the rat out.. I started throwing pasta onto the hardwood floor making a pathway to the outdoors..(comeon you stupid rat, hop off the counter and smell my bait and scurry on out!!)... The rat was too smart for my trick and I was just making a mess on the kitchen floor. So attempt number two... Go get the guy downstairs to fend off the rat. . Ashton hopped off his chair and ran downstairs' to get help, Up walked "Randall" the 21 yr old, blonde hair, tall muscular lifeguard. (Without a shirt on) omg! Haha, even Ashton admitted he was cute ;).. He grabbed a towel and was going to use it to catch the rat... (Ashton and I were still on the chairs cheering on Randall. ) he took two steps towards the ugly rat and it scurried out of the mansion!!! Yay!!! We did it!! We'll, Randall did it!!


After introducing ourselves and chuckling over the situation, Ashton offered Randall a beer to thank him. ;)..the next hour was spent visiting with the Aussie lifesaver.Er lifeguard. Lol..  (OkAy, What a weird way to meet your Aussie room mate! ..Randall ended up being a really nice guy and we had a good visit. If it weren't for the rat,we never would have met him),.,like I said, an odd sequence of events  Soon after all the chaos, Bob and his wife came home and we continued to visit.. So moral of the story, if you have a friend who insists that you met up with their family .. Trust them! It'll be worth your while. We enjoyed our stay in the mansion! And met some really nice people! (Despite the whole rat situation, we had a wonderful time) Stay tuned for more exciting adventures with Chelsey and Ashton Xox 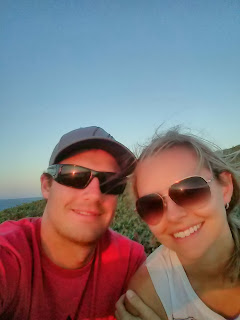