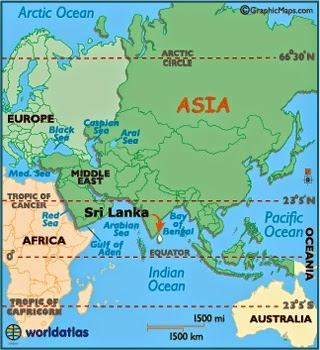 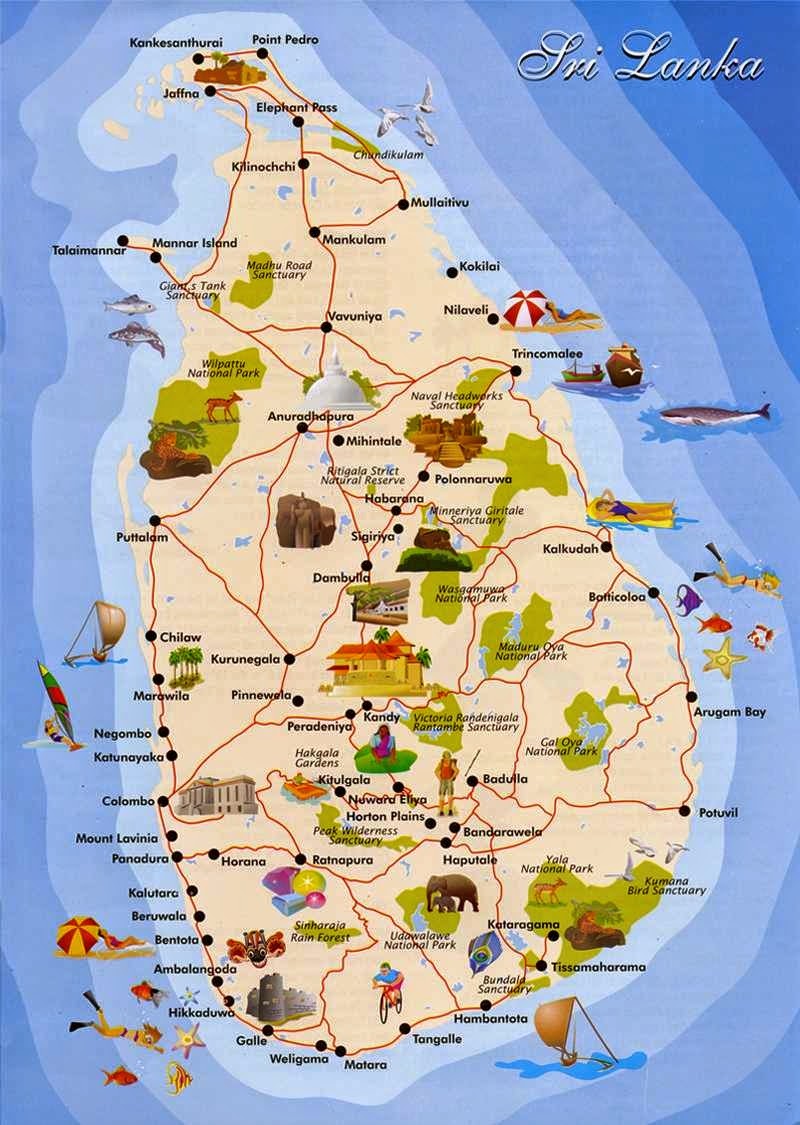 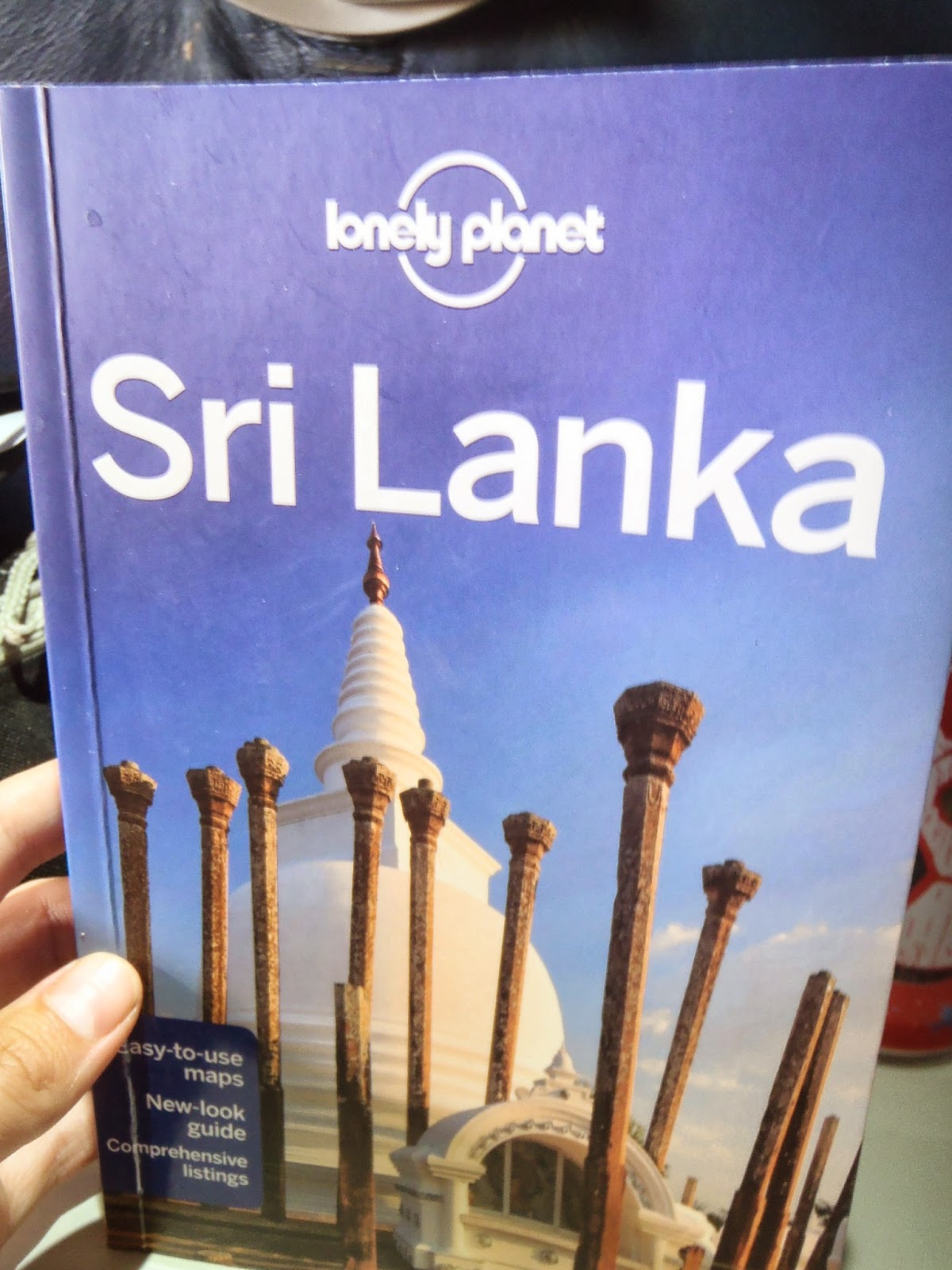 We have arrived!
Curious and...tipsy... ( i have become a nervous flyer, so wine really helps take the edge off!) 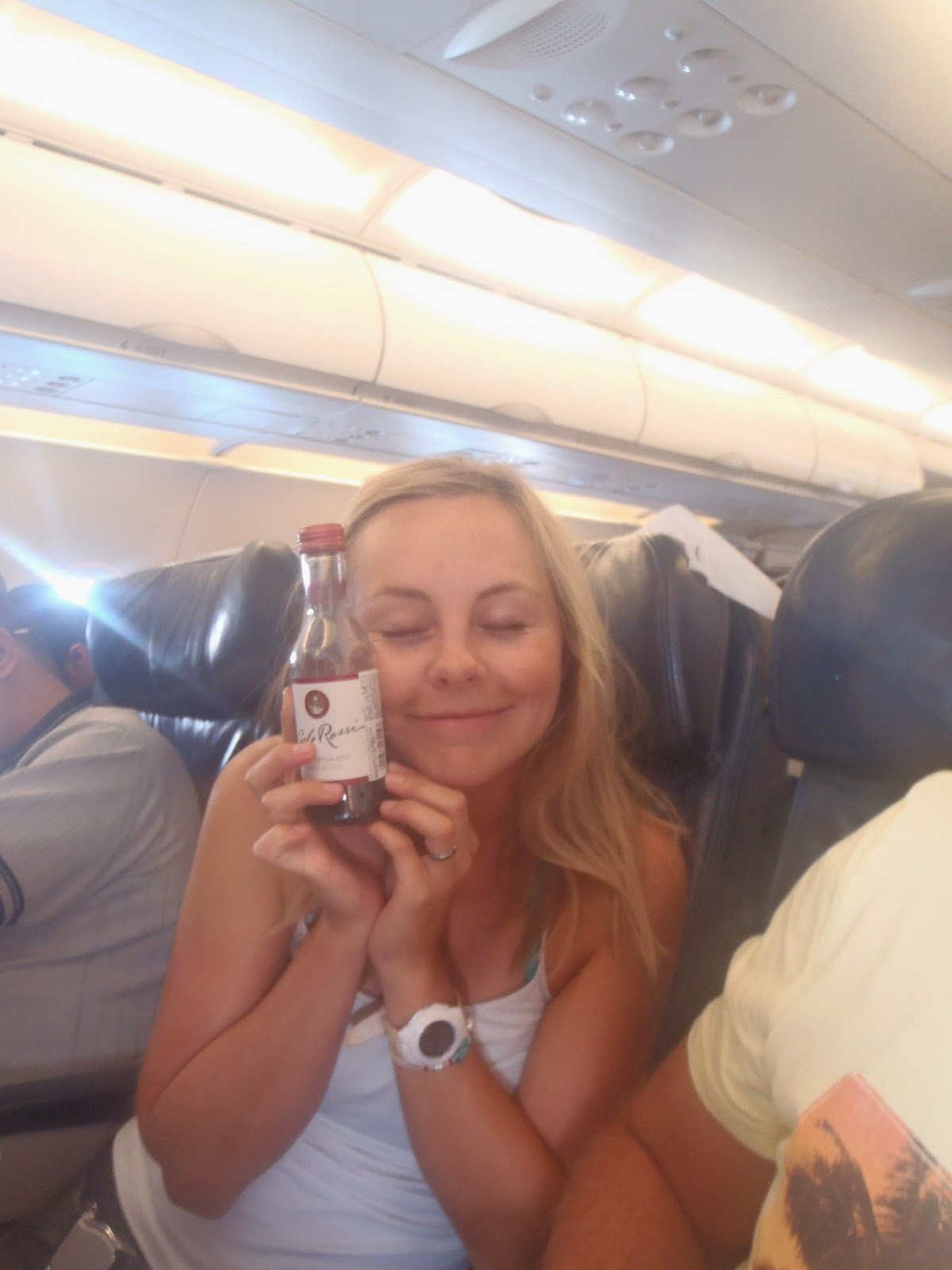 Having no idea what to expect, we arrived in the Colombo airport which was actually not in Colombo.. It was a hour away.
So we hopped into a taxi and headed to Mt.Lavina. We caught up on sleep and walked around the quiet neighbourhoods and busy main drag. 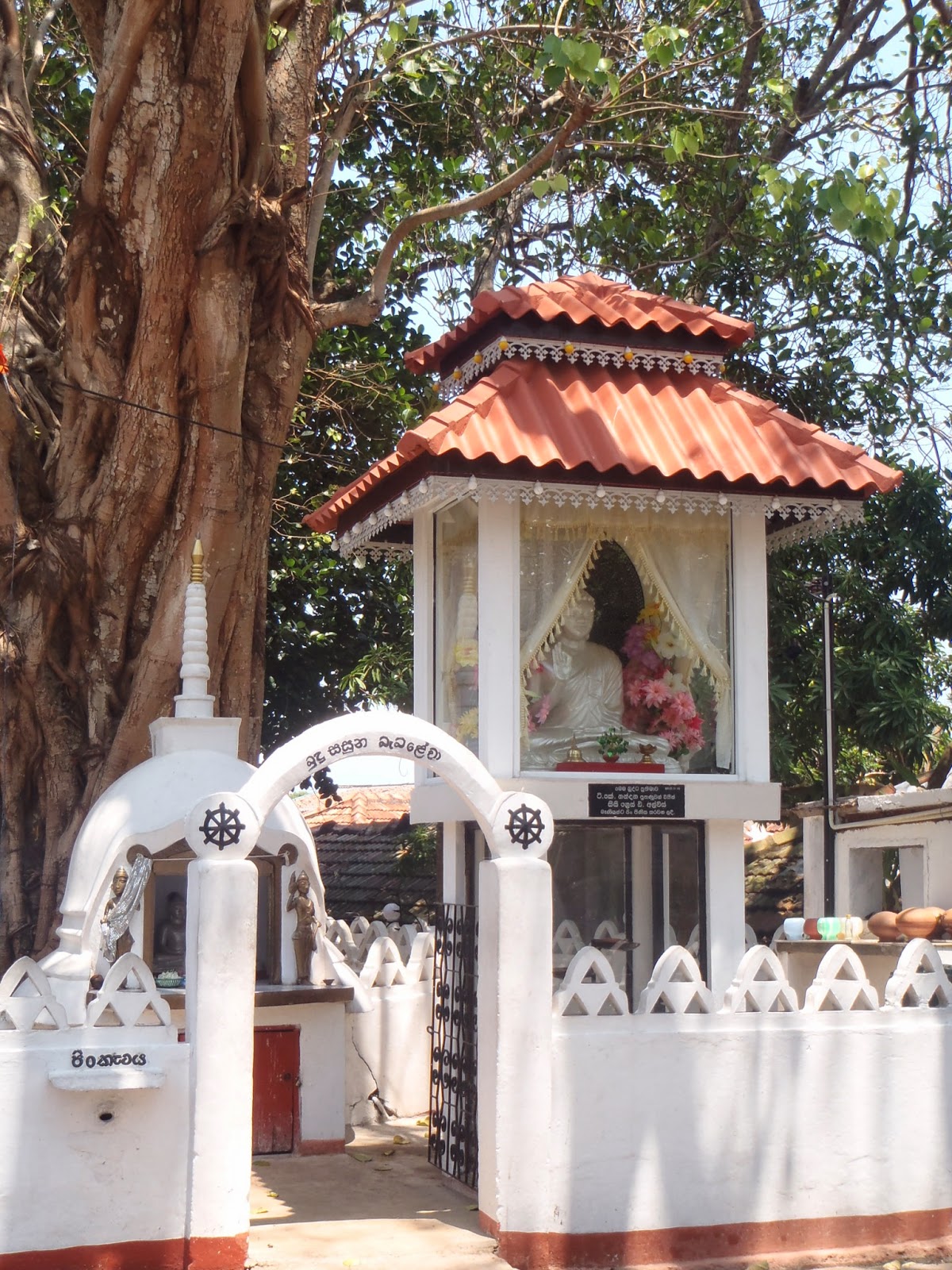 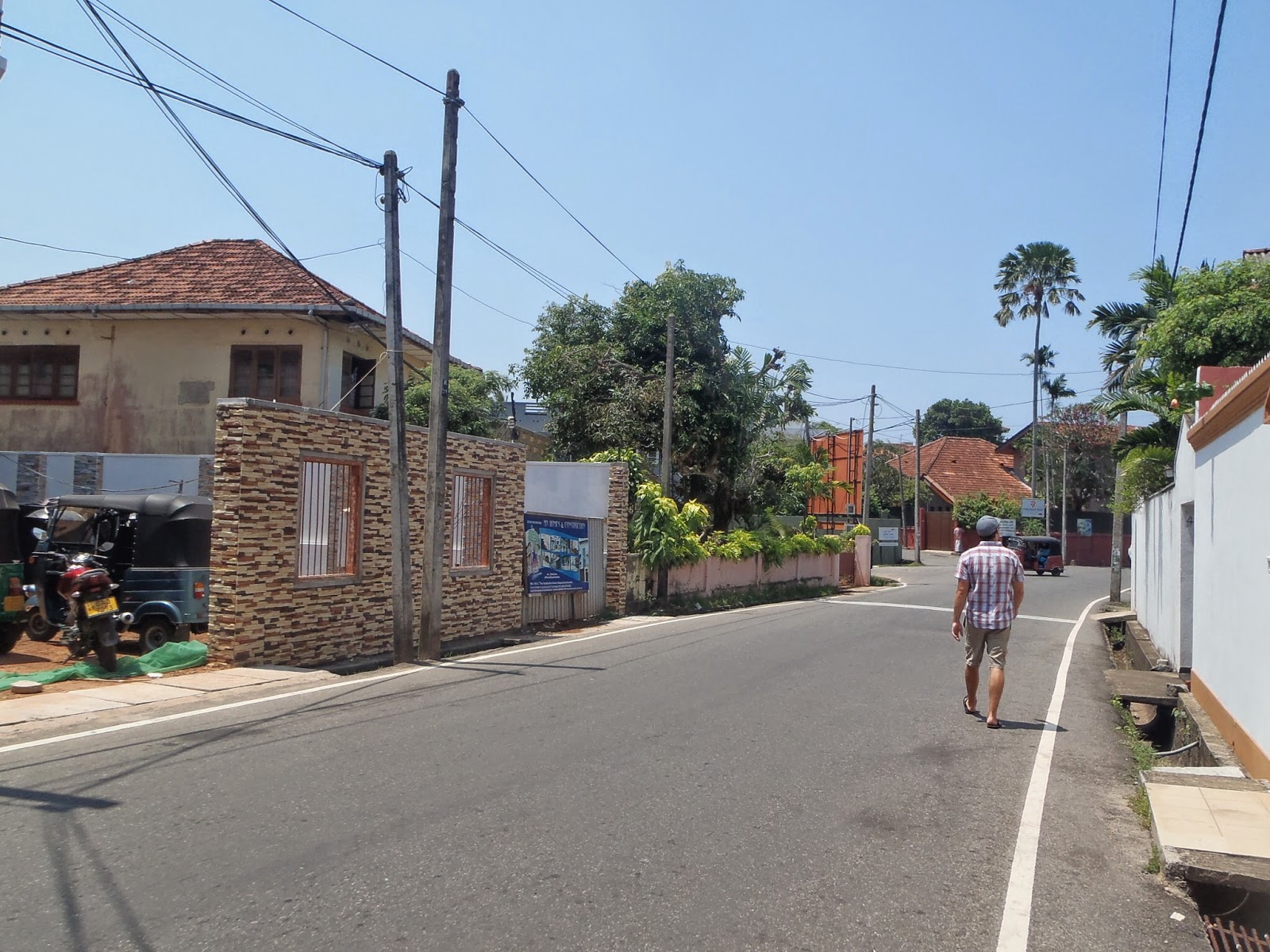 There are old rickety buses clipping along the highway, honking at pretty much everything, and tuk tuks zipping in and out of traffic and too honking at everything. (Or sitting on the side of the road, each asking us "do you want tuk tuk.".."no thank you, if we said no to the first 10 tuk tuk drivers, what makes you think we"ll change our mind and want a ride?)..
Lol.. Ok.. So maybe I let the noise and heat get to me and got a little cranky..but seriously there are over "5 hundred thousand tuk tuks in Sri Lanka "-amazing race stat 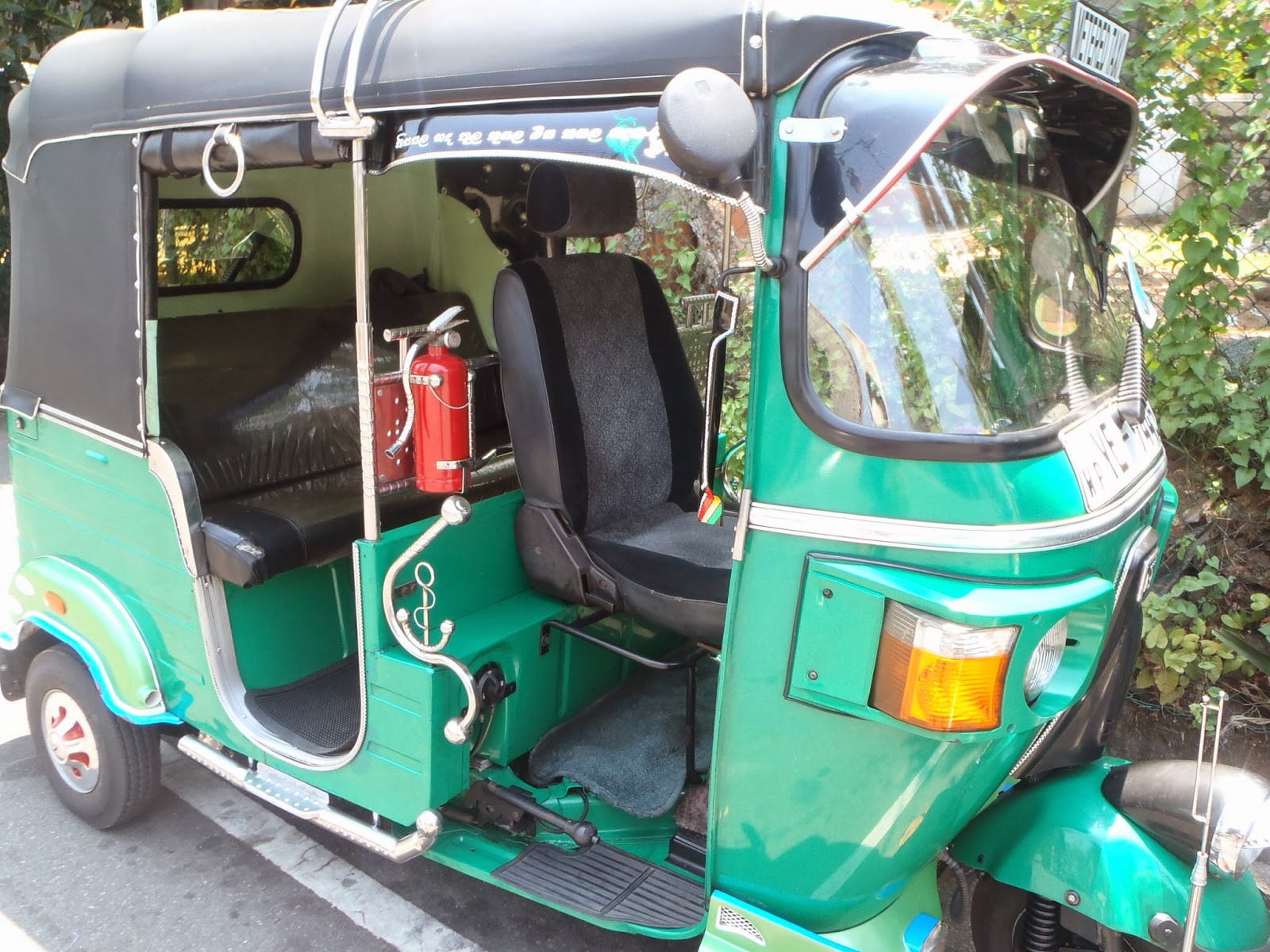 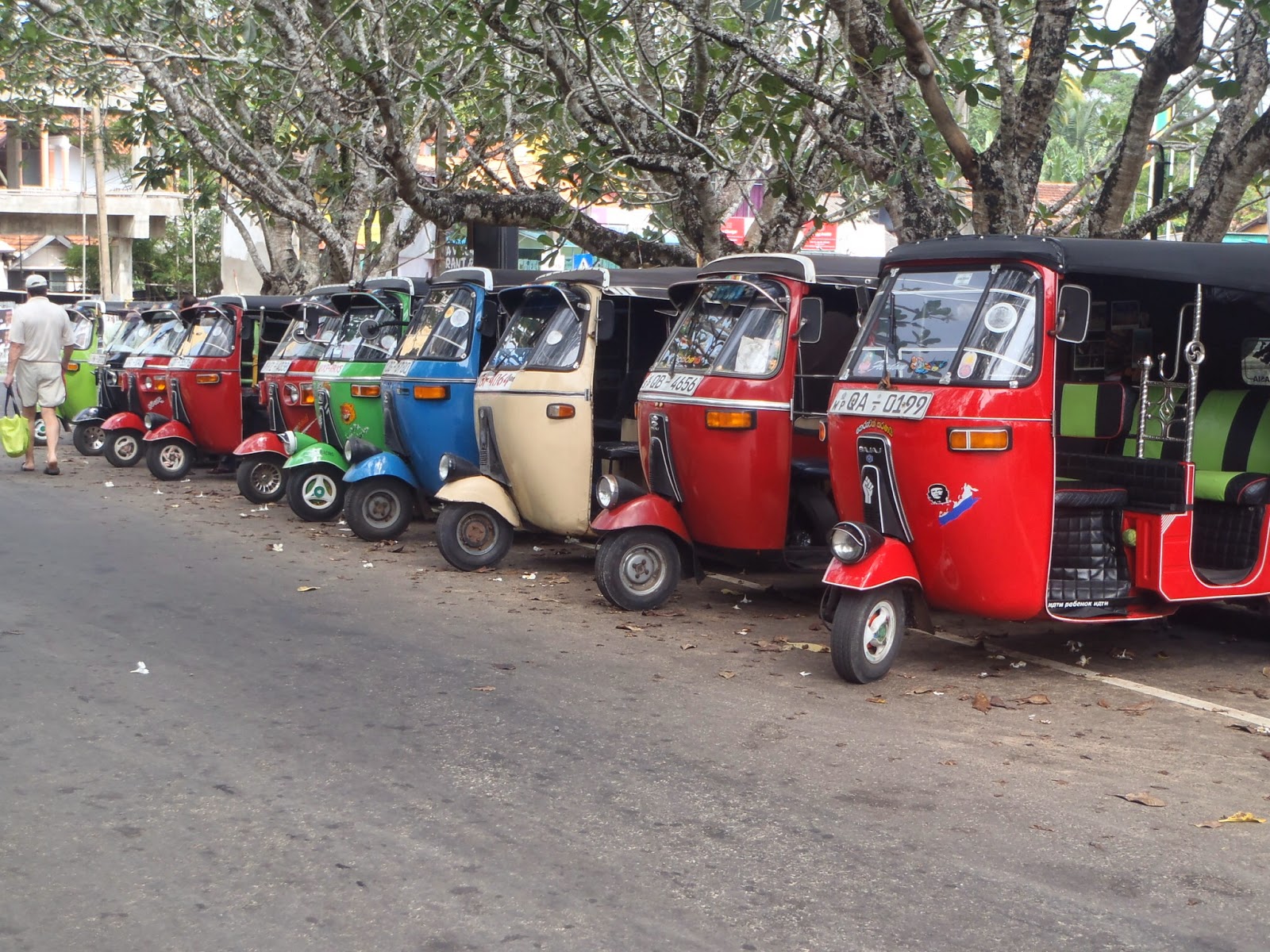 Along with buses, tuk tuks, and vehicles, we can always hear the train..
Transport by train is most popular in Sri Lanka and as we go inland we will be taking one of "worlds nicest train ride"..didja know.. Half of the trains here were once used by Canada, and were then donated to Sri Lanka in the 60's. (Now you can understand how old and run down these trains are)
A second class ticket (a fan, open air, and possibly a seat) is about 100 rupiahs each..$1 Canadian dollar to ride the train for a couple hours.. Cheap! 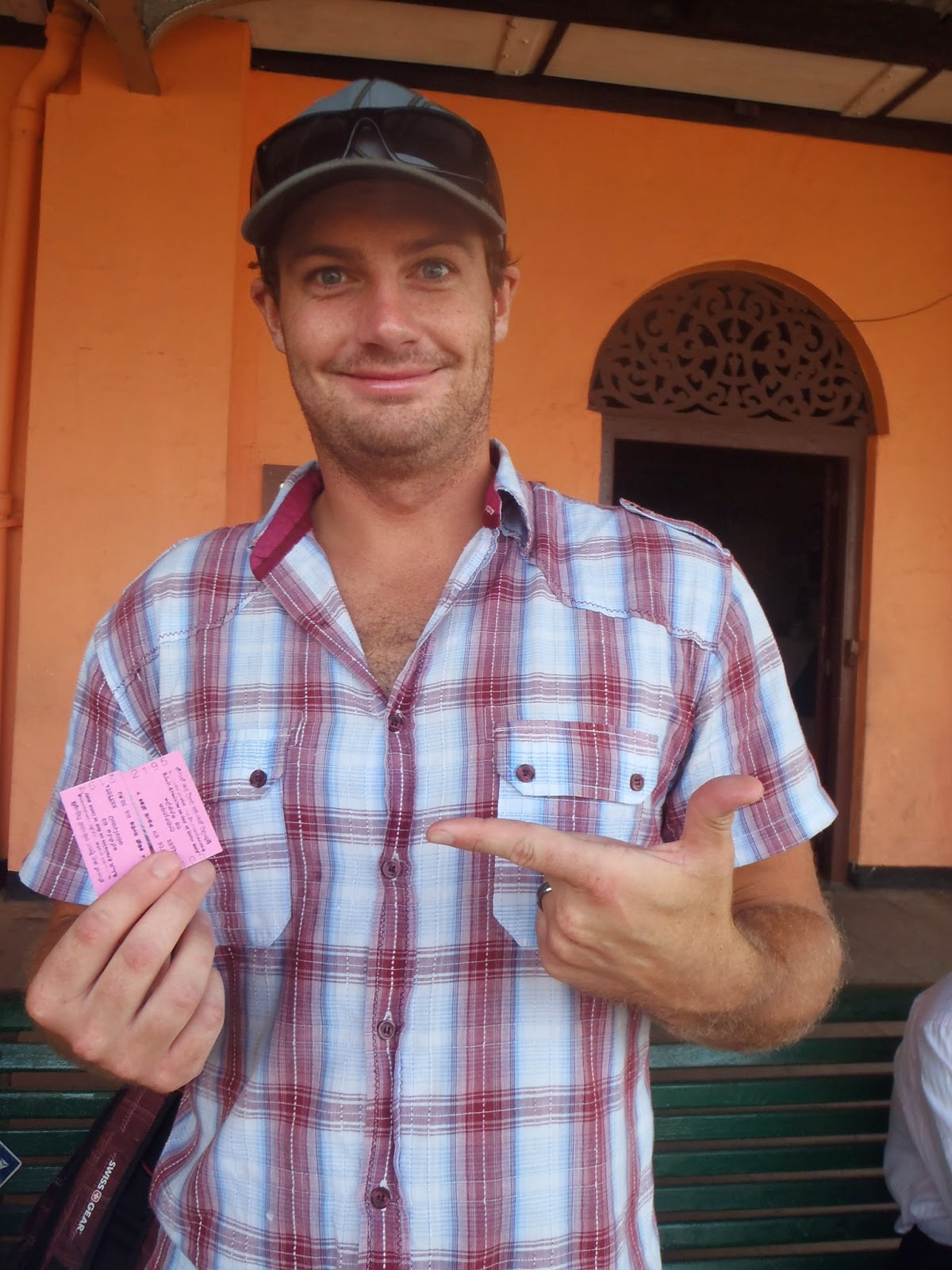 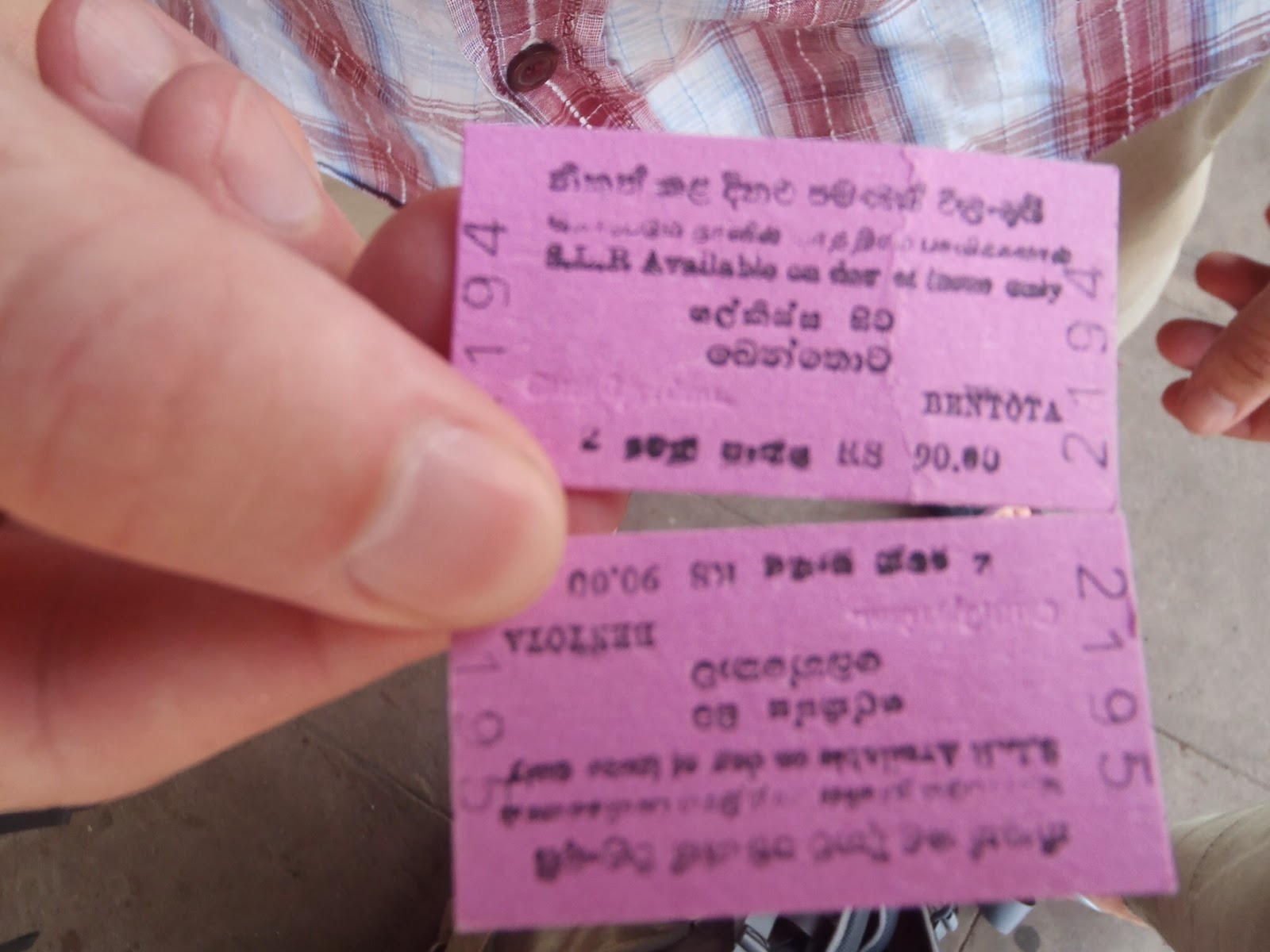 Our first train ride was an adventure. Ashton was able to ask around and get us tickets heading in the right direction. Once on the train, we noticed many more white people and many "business looking Sri Lankan men on their way to work" .anyways we walked through a couple cars until we found a seat, which were facing backwards with a small open window. There were three rickety old fans in our car, but one broke down so we watched a man stick his pen into the fan repeatedly trying to get it going.. No luck.. The train tracks were alongside the coast, so we could see ocean on one side, and
villages on the other side. 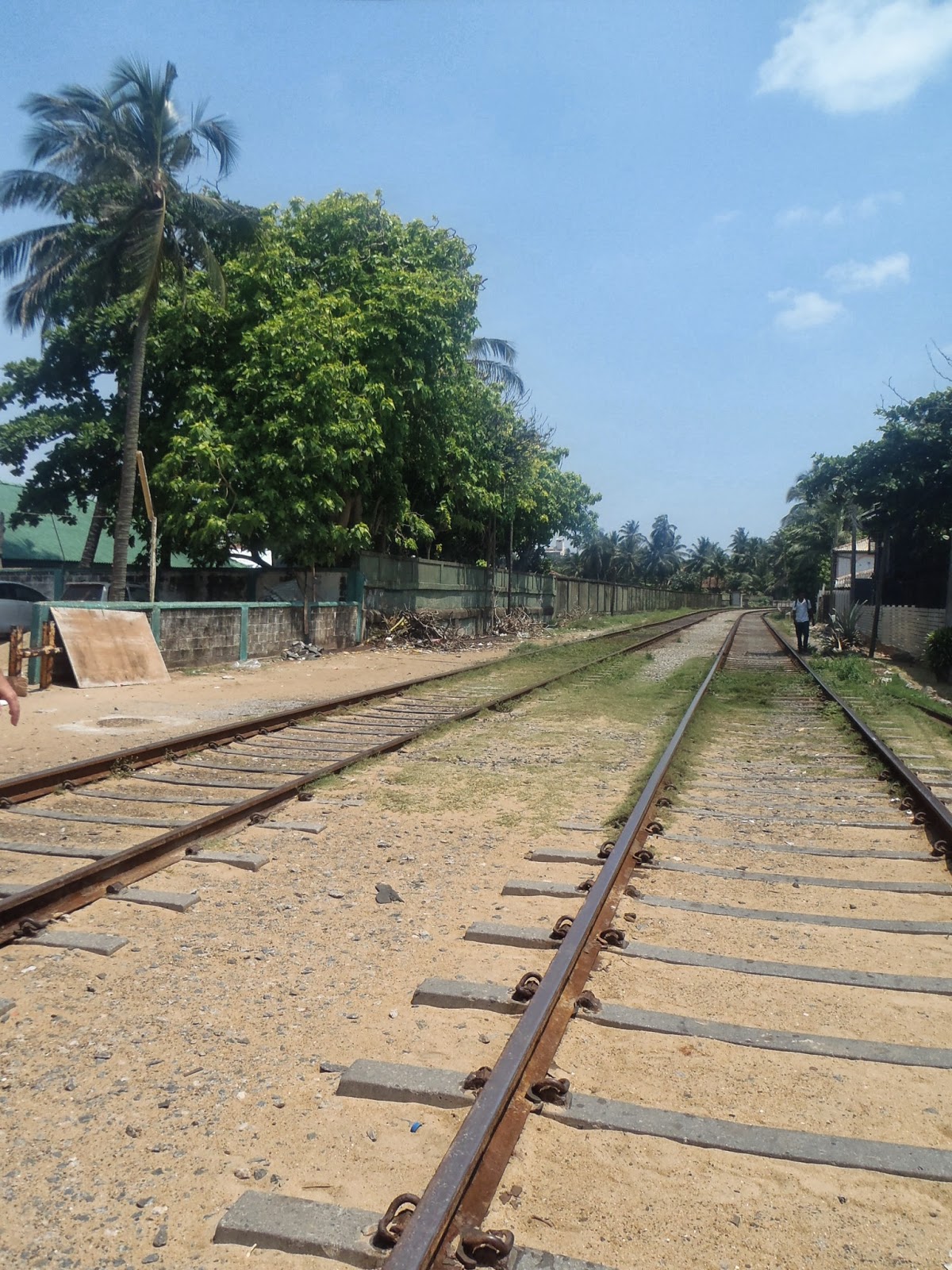 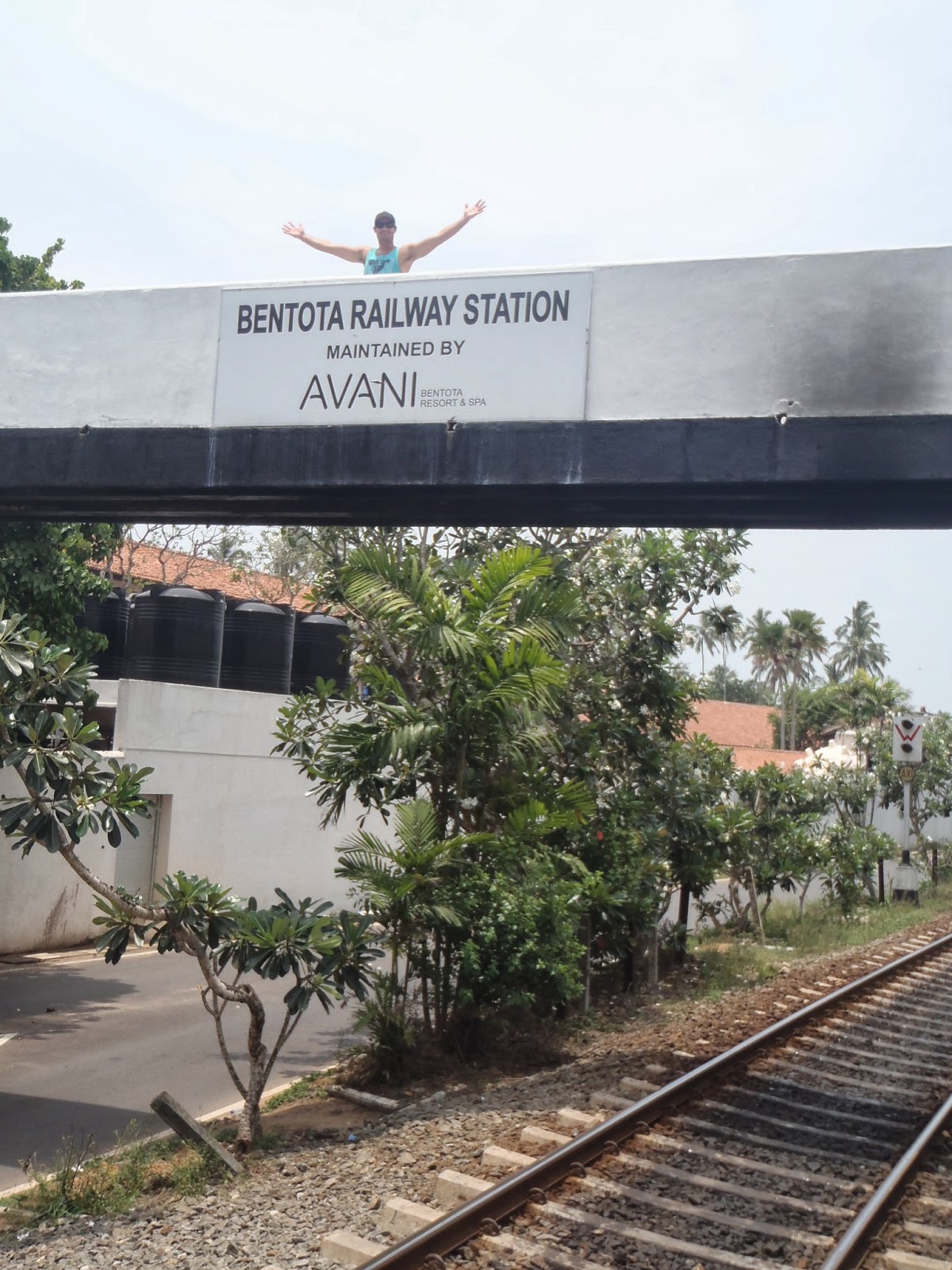 Finally, a man began asking us where we were going. He told us we were the next stop. Stops usually lasted a few minutes as people came on and got off, but when our stop came, it felt like seconds..Ashton was struggling to get our big bags off the overhead rack, while German tourists were rushing onto the train and were very rammy, pushing through the isle trying to find seats. They blocked the isle making it even more difficult for Ashton to get the bags down. Well I was ahead and made my way off the train and onto the platform. I was already talking with a man who was trying to tell us where to stay. Within seconds I heard the train whistle and realized Ashton wasn't on the platform!, hhhooolllyyy coowwww!,
I hopped back on the train and there Ashton was rushing with our bags. The train was rolling ever so slowly and we could have hopped off together, but now two men were shouting at us "you can't get off now, it's forbidden!" ... Ggrr!, "next stop is in half hour"..
So we sat back down fuming. The next stop we already had our bags sitting by the door and were ready to push our way off the train. We hopped off and bought another train ride back to our original
destination. After 20 minutes, we were headed back. Then overpaid a tuk tuk to take us to our "guest house" .

In all, it wasn't a huge deal. Just a little extra time and a few more dollars were spent. But we learned our lesson. Now we use GPS to show us where we are alongside the tracks and pay close attention to signs. We get our bags and stand by the train exit a whole stop ahead that way we are ready. We have also learned that taking a tuk tuk is fun but quadrupole the price of taking a local bus. Example... Tuk tuk for 16 km = 250 rupia ($2.20) or local bus for 16 km = 20 rupia (0.15cents)..

( yes we know that a two twenty is affordable, but it is just the principle and it saves us the headache of bardering with the tuk tuk driver)

Anyways .. Back to our first destination: Mt Lavina. (A suburb of Colombo) We pretended we were
on amazing race, and checked out the beautiful Mt Lavina hotel and beach grounds. Very nice! (I'm
sure you know that "amazing race" is our favourite reality tv series to watch.) Couples race all over the world, completing tasks and challenges along the way. The last team to check in after each leg of the race is eliminated..(sent home).. The winner receives a million dollars, and the runner ups receive an amazing adventure of flying all over the world with their partner...the tasks and challenges are all related to the culture and livelihood of the country they are in.

Ironically the amazing race that aired just prior to us arriving here was based in Sri Lanka. So we
were ecstatic! (During our travels we can watch amazing race on my iPad via you tube! If we have good wifi, the show is very easy viewing and makes for a nice way to spend an hour)..
The main beach in Mt Lavina was very nice. A wide, long stretch of tan coloured beach with small waves, clean and exciting..locals playing cricket, pulling In fishing lines, having a bite to eat or strolling along enjoying sunset. 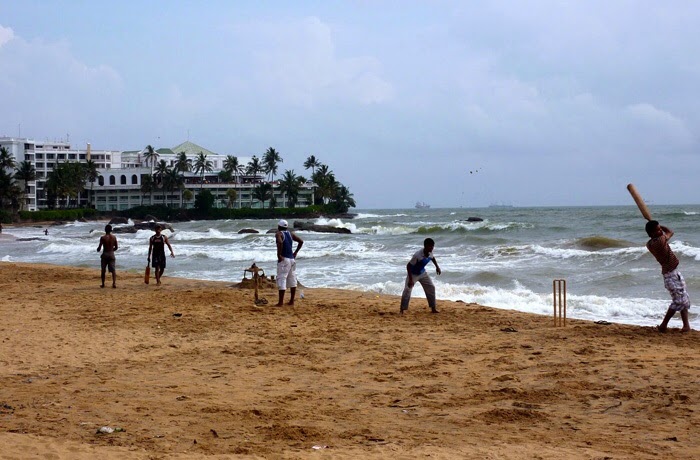 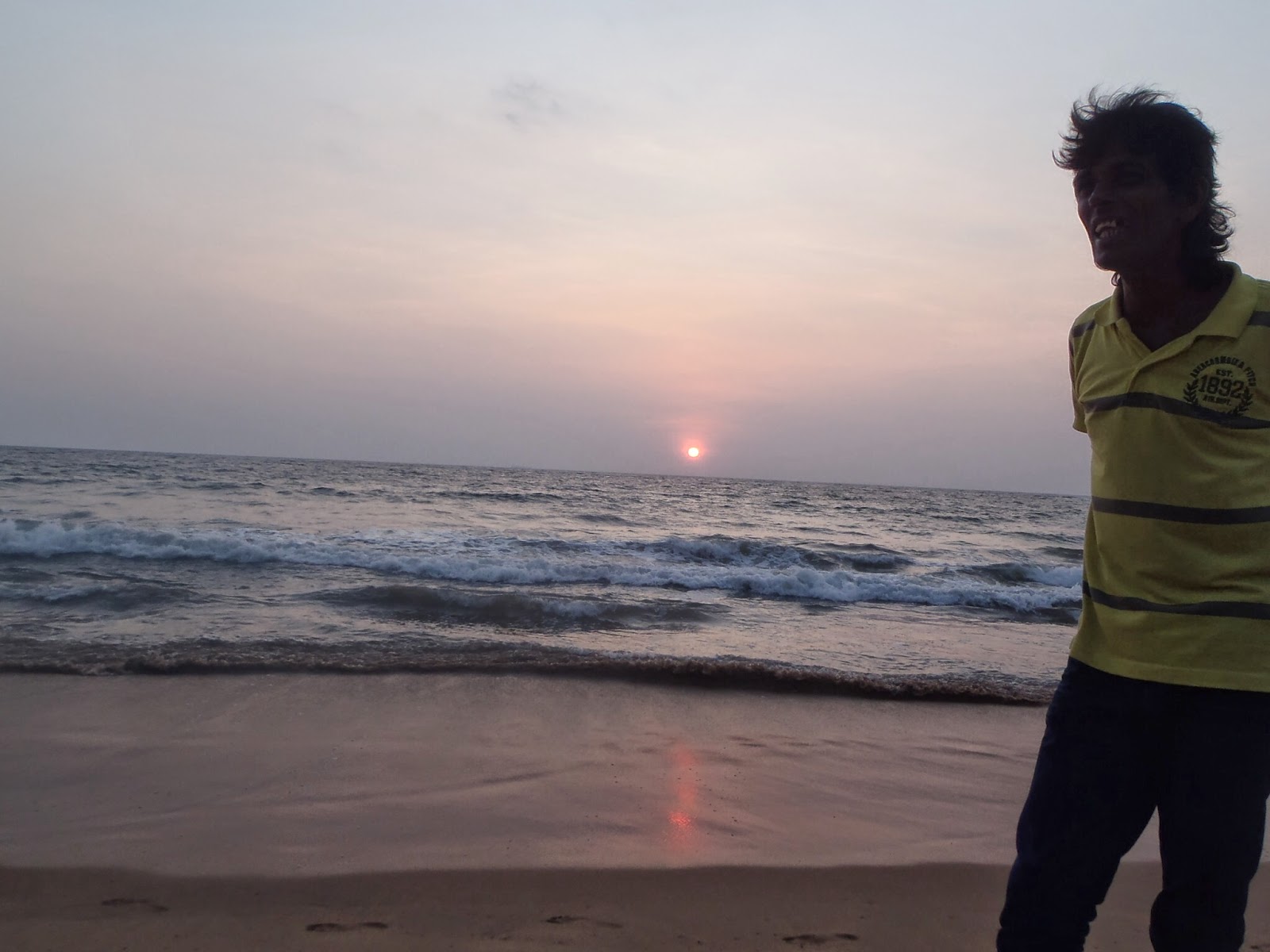 We slurped back our first Sri Lankan beer... Yummy ($3 beer) 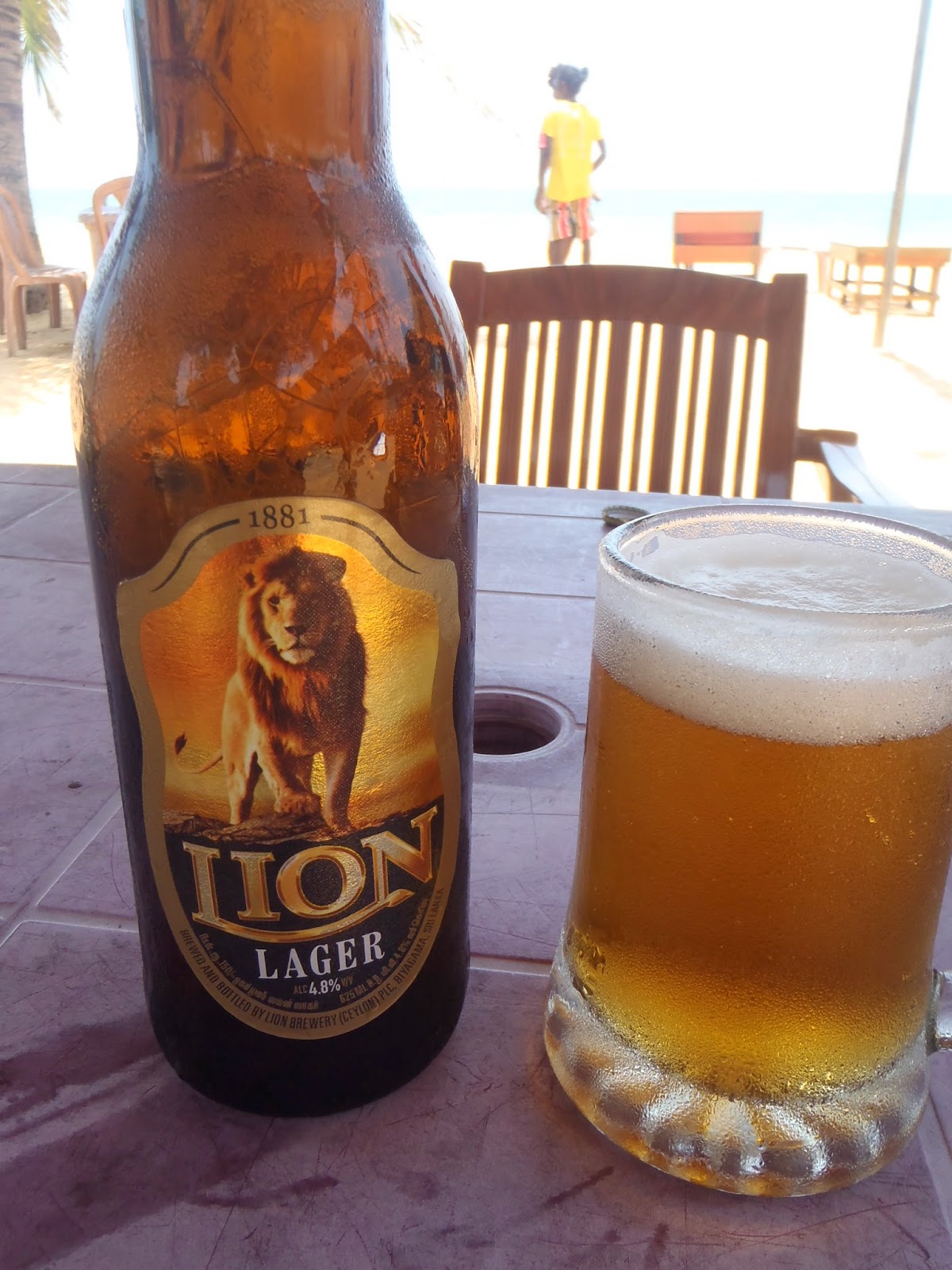 Then we trained (as per our story above) .. To Bentota. This is where we soon learned that many many Germans and Russians come to Sri Lanka for their holidays. It is close to them and offers the same thing Mexico offers to us.. Sun, sand, and relaxation. The beach was lined with top end resorts and white people relaxing.

We however, did not stay at any of these beautiful resorts.. We found ourselves a cute guest house with a pool, great wifi and a delicious and huge breakfast. It was a short walk to the beach and short walk to the main town. 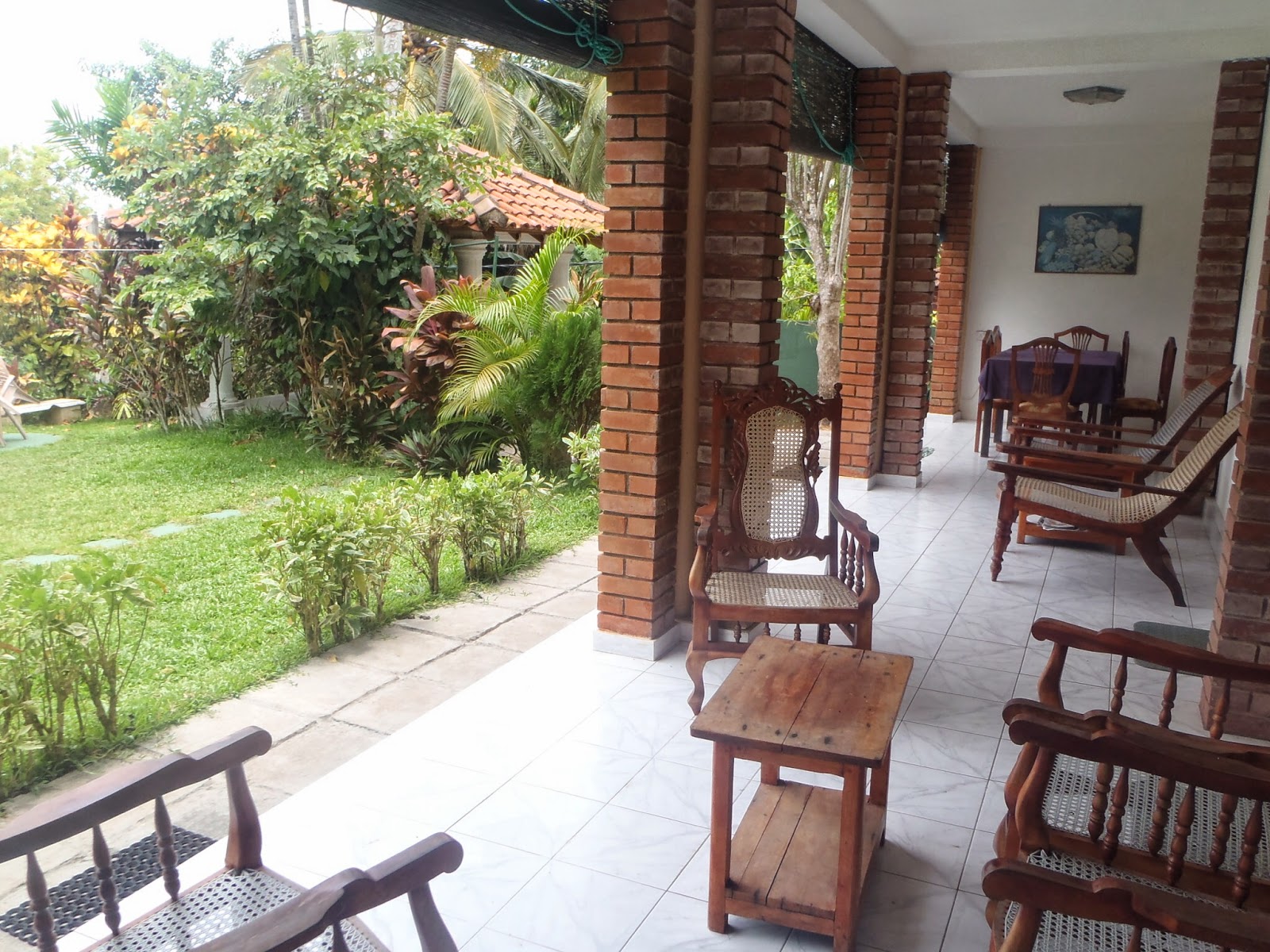 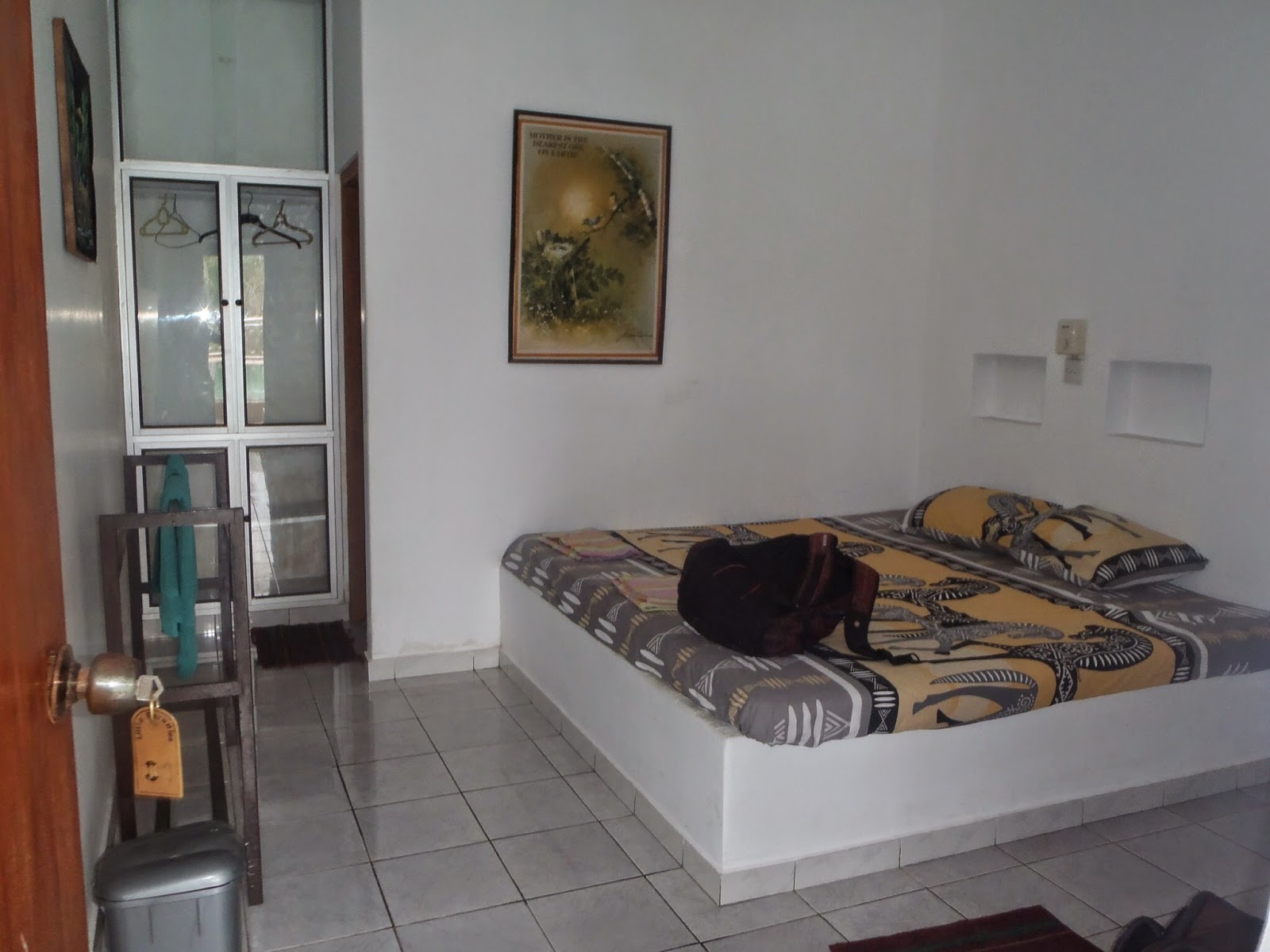 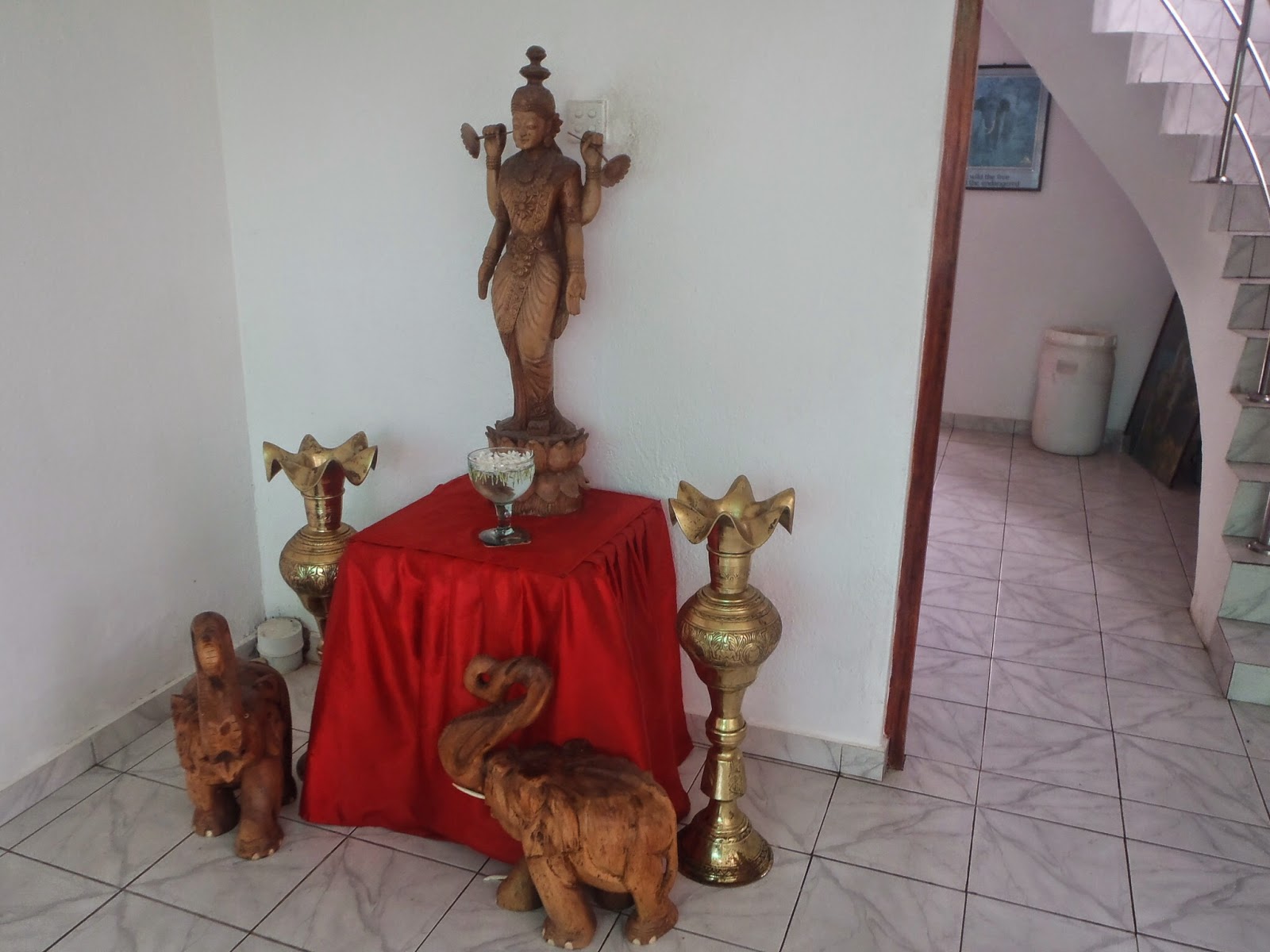 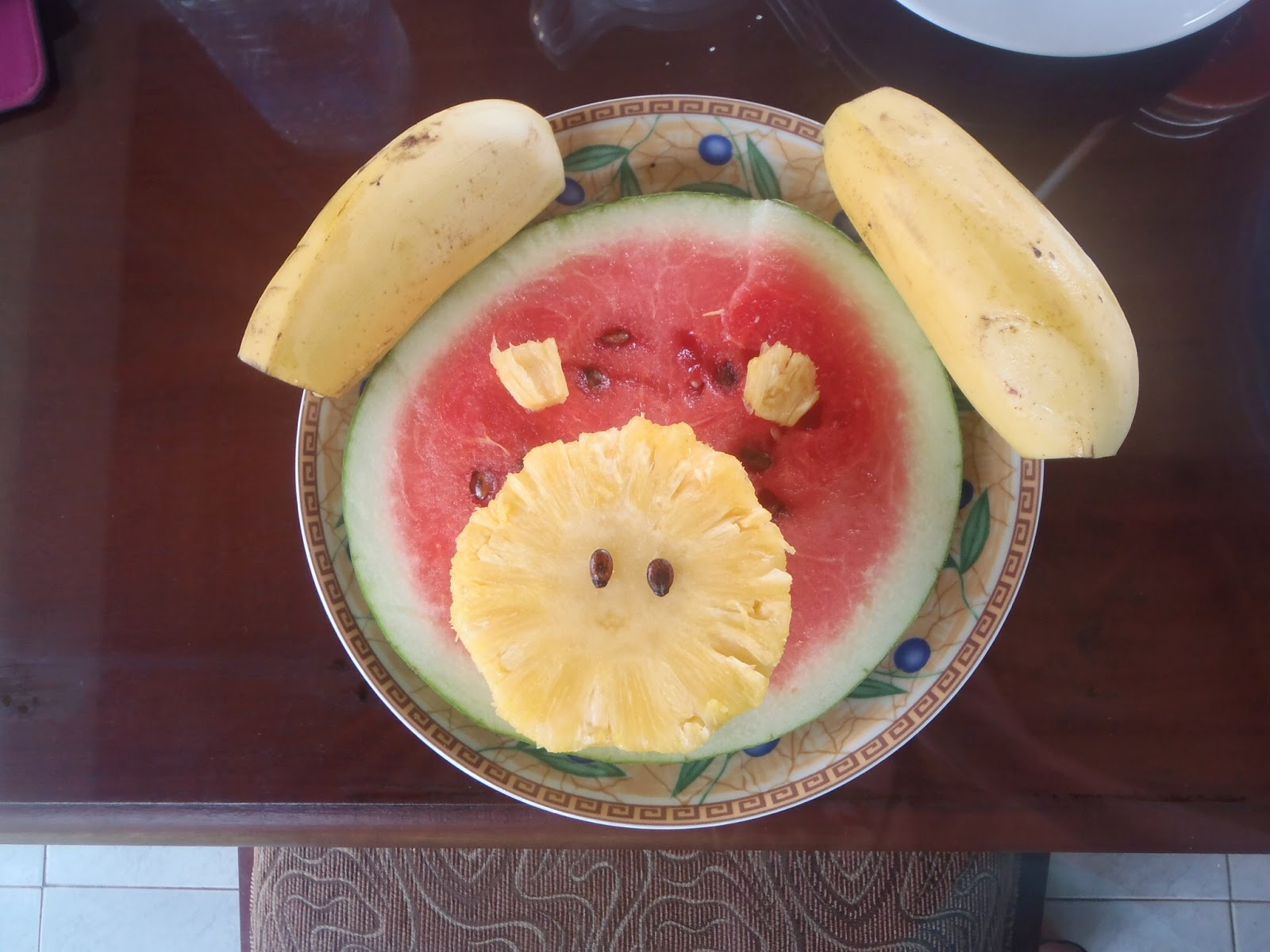 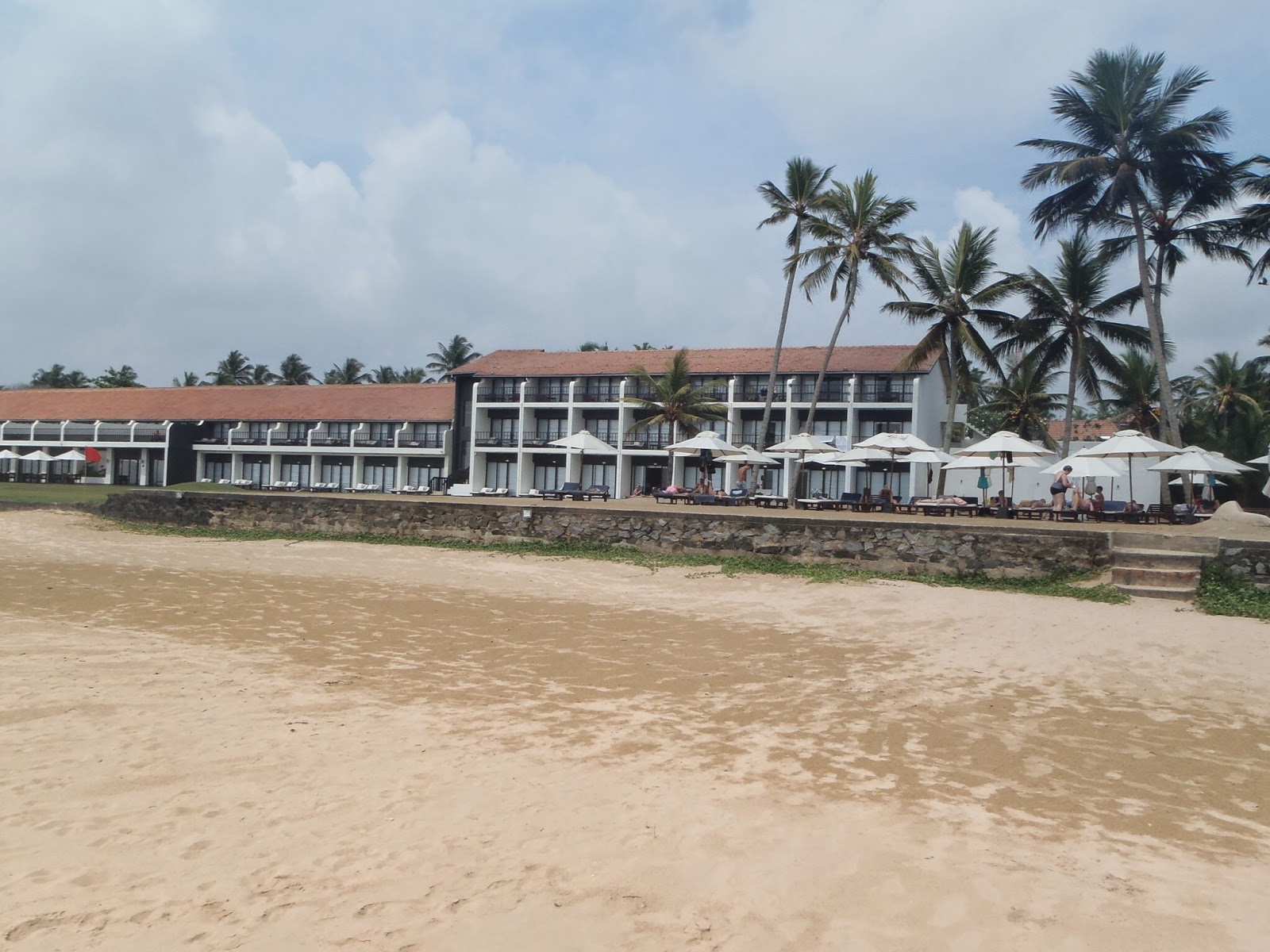 (One of the many top end resorts)

Currently we are exploring the southern tip of Sri Lanka, in a budget friendly, backpacking area called Unawatuna.
Unawatuna was devastated by the 2004 tsunami and has now been rebuilt. For some odd reason, the builders ignored the rules that buildings should be set back from the water, and rebuilt their places right on the sand. With high tide, some of the restaurants and homestays are right overtop the water...it's sad because now there is little beach to lay on. Don't get me wrong, the beach is white and the water is colourful shades of blue because we are in a bay, so swimming here is really great.

We also went on a small jungle hike and found a super pretty quiet beach.

Yesterday we bussed into the nearby town of Galle to explore "the fort" which is now a World Heritage Site. The 36-hectare Fort was built by the Dutch beginning in 1663. We wandered the streets to look at old, architecture buildings, and strolled the fort walls to watch daily life go on inside the walls of the fort. 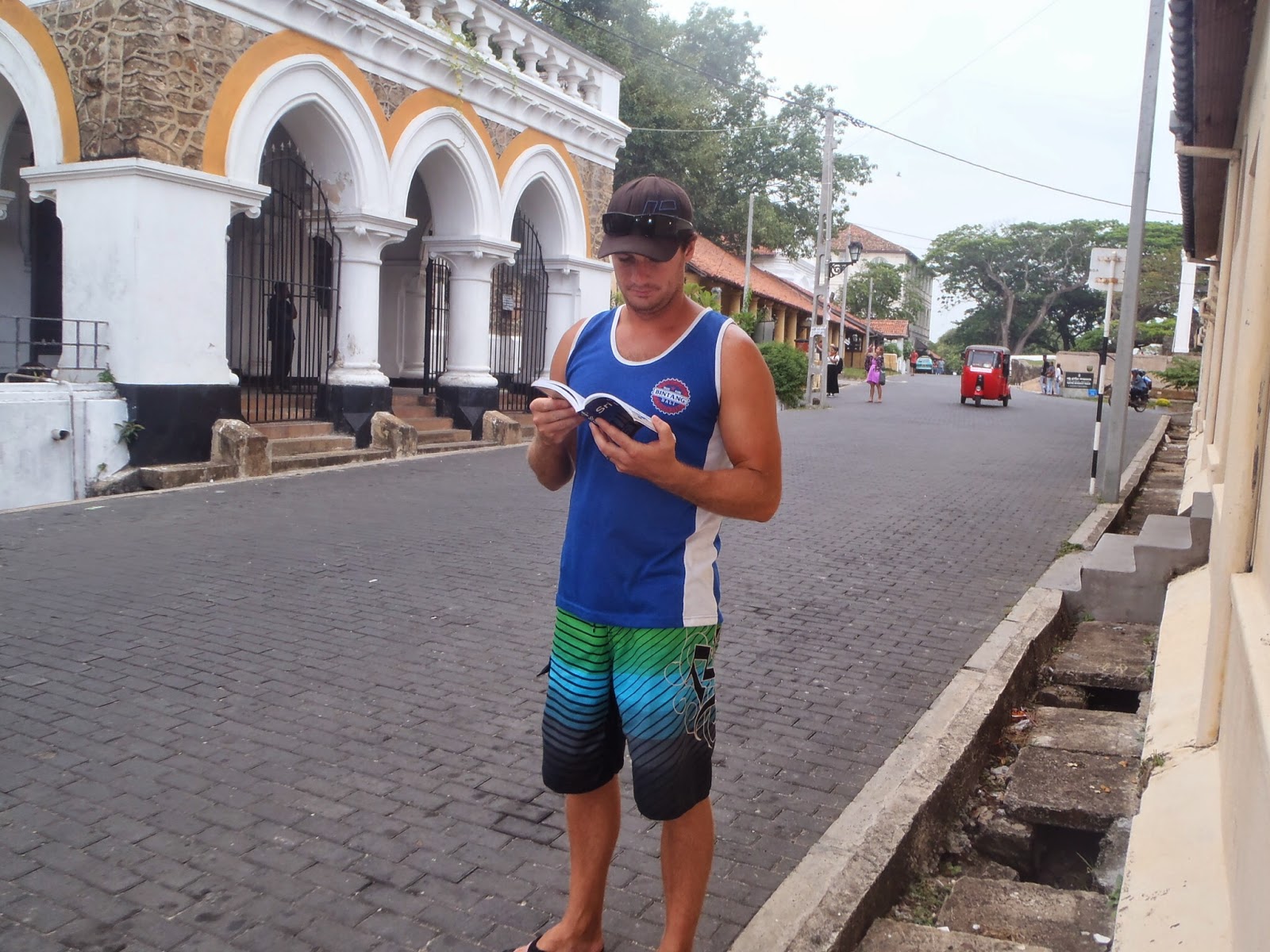 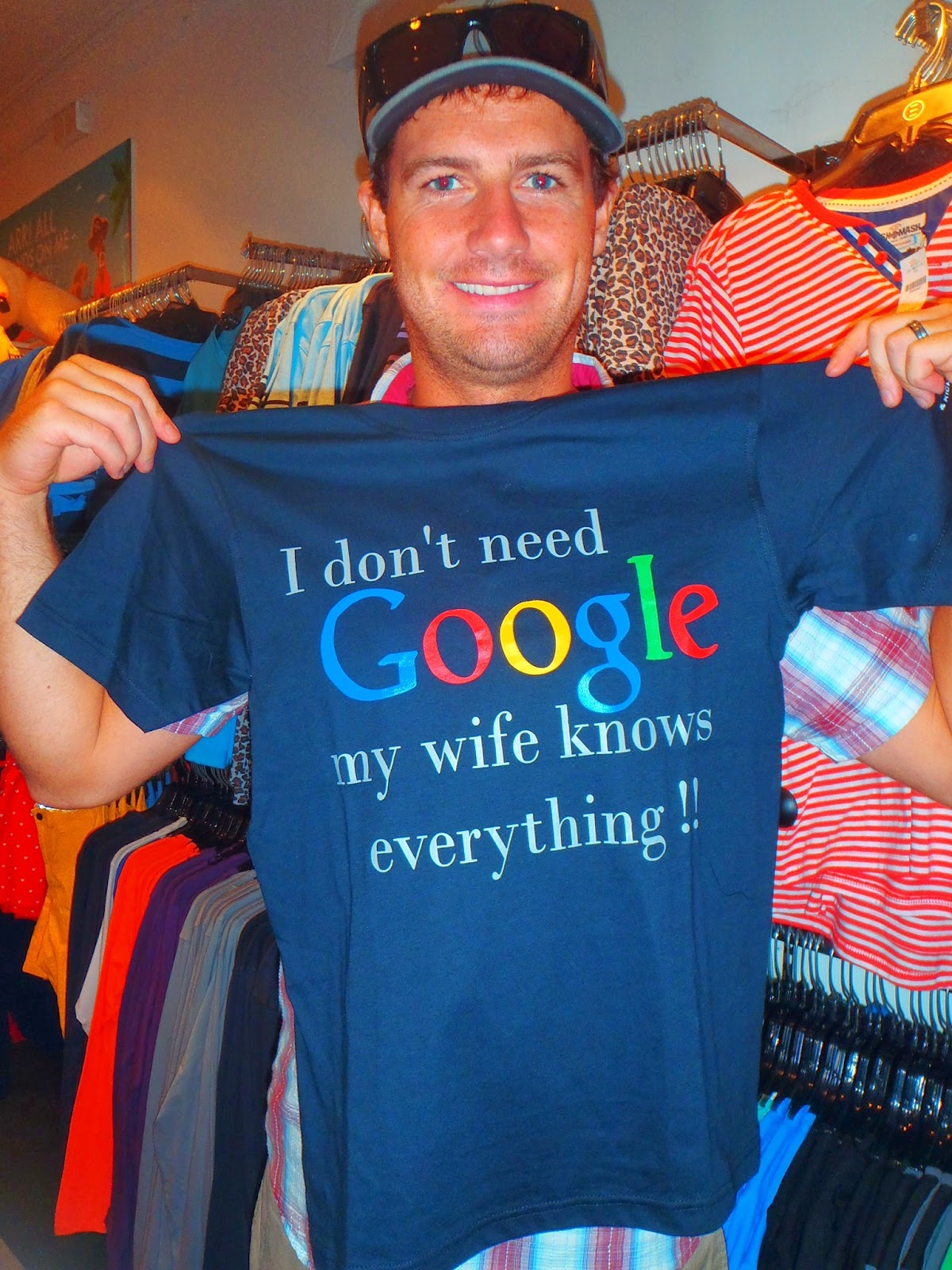 Ah! Check out the craziness!