Clear water Croatia has felt like a vacation from backpacking. It's just so comfortable, easy, and of course, beautiful. Maybe it's the flexibility of having our own car, maybe it's the people, maybe it's the heat, or maybe it's a mix of everything good... Whatever it is, it's been pleasant and we are thoroughly enjoying it! 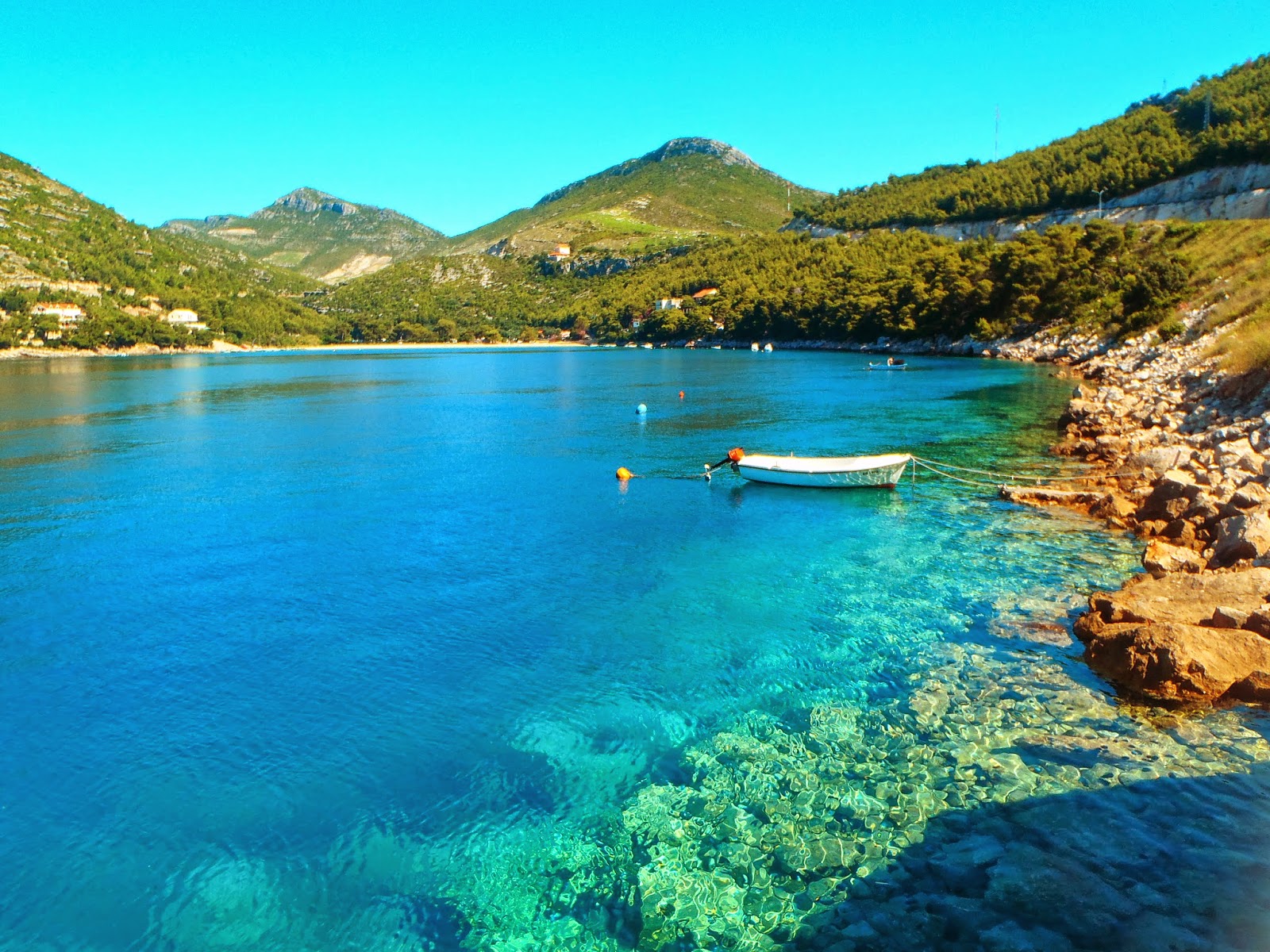 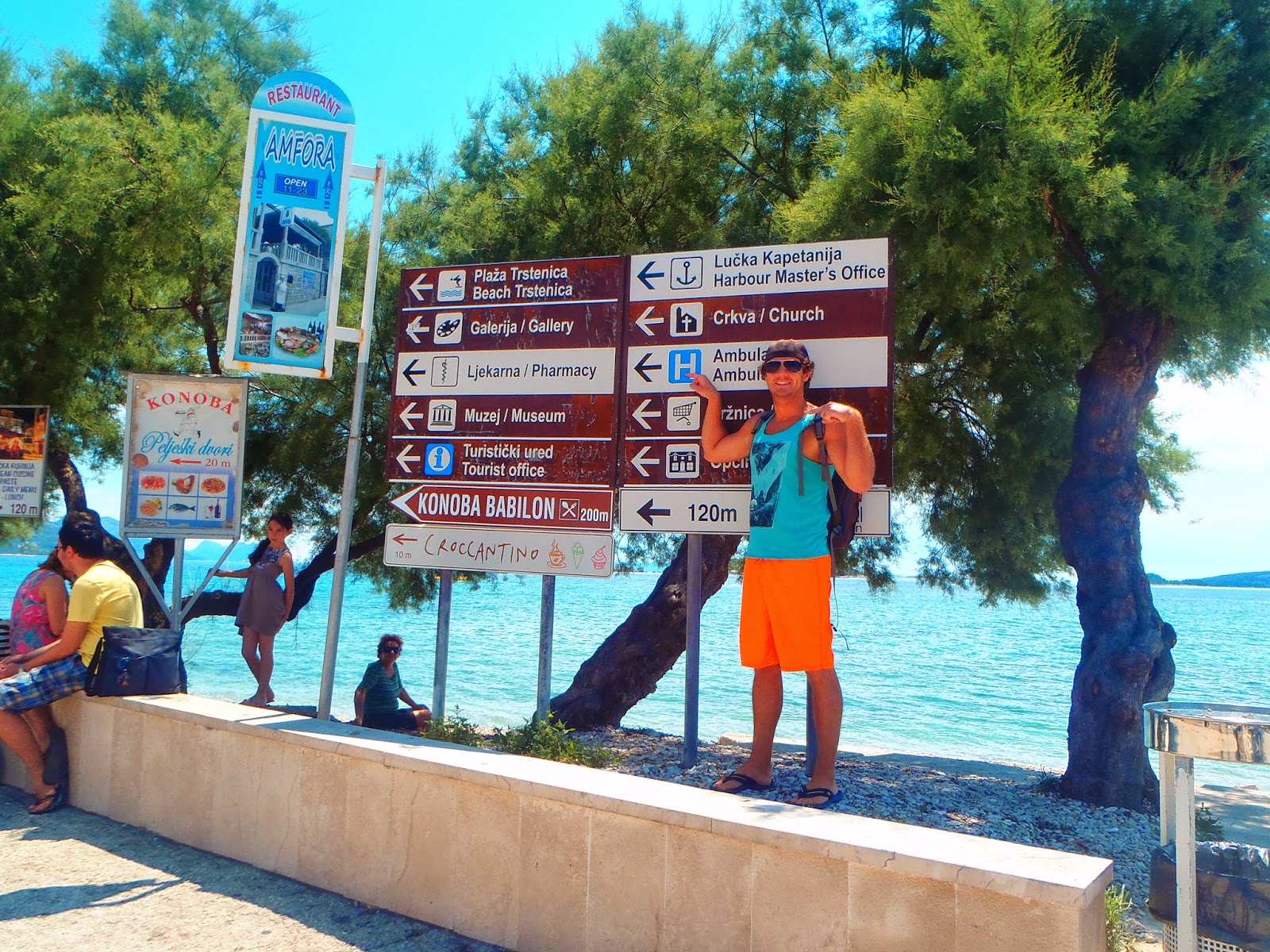 The lonely planet guide book describes Croatia as a "knockout of a country on the Adriatic Sea.""it's sapphire waters draw visitors to remote islands, hidden coves and traditional fishing villages while touting the glitzy beach and yacht scene"

After Montenegro we bypassed Dubrovnik since we already checked it out, and continued onto Orebic (a tiny village on the southern Pennisula). After six hours of driving we arrived to a blue sky, hot afternoon. We didn't book a place to stay because we had noticed that visitors who arrived to a place without a reservation were getting a better price on their room. So, we had marked out the location for a couple rooms that we knew were available, and were hoping to just show up to see if
the price was different. However, this proved to be difficult as neither of the places we marked out were anywhere to be found. We asked three local people who had no idea where those rooms were
located... So we aborted mission and headed for the water, soaking up the last few hours of the
afternoon.

Most of the accomodation here in Croatia is an apartment room attached to a family home. Majority of rooms have a kitchenette. Any family that has rooms to rent puts a sign infront of their home and room rates can be negotiated. .. After our swim we randomly walked up to homes and finally found a bright room for our stay. Our neighbours were Dutch and had also been to Montenegro on a nine day pedal bike tour!,! Yikes that's a lot of mountain roads to bike on!

The rocky beaches and clear water at Orebic was so enticing. Ashton bought and blew up a couple floaty toys for us! So we've been stuffing them into the back seat of our little car and floatin everywhere we go!

In fact, the floaties became very useful after Ashton's accident..,
I'd like to spare you the details, however I'm sure you'll wonder why Ashton has a bandage on his finger in every picture....
Well, the story is quite simple and very uneventful... Ashton decided to get out his big, sharp Swiss Army knife to cut open the tiny instant coffee package. I'm sure you see where this is going. He sliced off a chunk of his pointer finger!!
Ironically there was a first aid kit beside our room, so I bandaged him up and we continued on.

Being the tough guy that he is, he showed no tears or signs of pain, even though it was a bloody
mess. He's been quite sad about wearing a dressing and not being able to dive into the water, but his wound is healing nicely and he's been able to float around without getting his bandage wet.

After Ashton's accident, we ferried over to Mljet Island and spent the afternoon at the national park.

There is a lot of hype over this island for its lush forest area, secluded bays and tiny lakes within the small island. We were impressed with what we saw. It was a quiet, relaxing area and the lake was calm. Day trippers were scattered along the shore of the lake.

From there we drove up the coast to Split. The second largest city in Croatia with a population of 178,000, this city was a good place to see Traditional Croatian life as it buzzed around us.

We rented an apartment from a young guy named Bepo. He was a witty, sarcastic, smart guy who for some reason liked to tease Ashton. Or more like burn him every chance he got. ..it all started when he called Ashton "a$$hole" because of the similarity in the spelling.?!?..

He took a liking to us because we are Canadian, and he soon showed us around his "office" which was a tiny shed in the backyard. ? As he drove us down the block he started swearing out loud and soon explained that his neighbour kept parking in his spot. He stopped the vehicle and the two of them exchanged some angry words and gestures.
(We have realized how calm and easy going Canadians are, compared to opinionated, angry aggressive people who seem to always be yelling at each other.) but then again, Some people find our easy going personality to be "boring"

As the evening went on we ran into Bepo as we were walking around the promenade and he
continued to burn Ashton. he started drilling him with a bunch of questions. Ashton would take a bit
of time to think of what to say so he wouldn't get made fun of because Bepo was a fast talker and a bit hard to understand and he knew Bepo was going to try to burn him more. When he didn't respond immediately after a question Bepo just said, "do you always sleep while you walk?"
He he.. Just one of many examples.

Split was more touristy and dirty then we expected, but then again we compared everything to sweet gorgeous Duvbronivick. Every town on the southern coast has an "old town" with surrounding walls, churches and touristy shops. Beside the old town there are always beaches or rocky areas to go swim.
The clock tower gave us a good 360 view of the city. 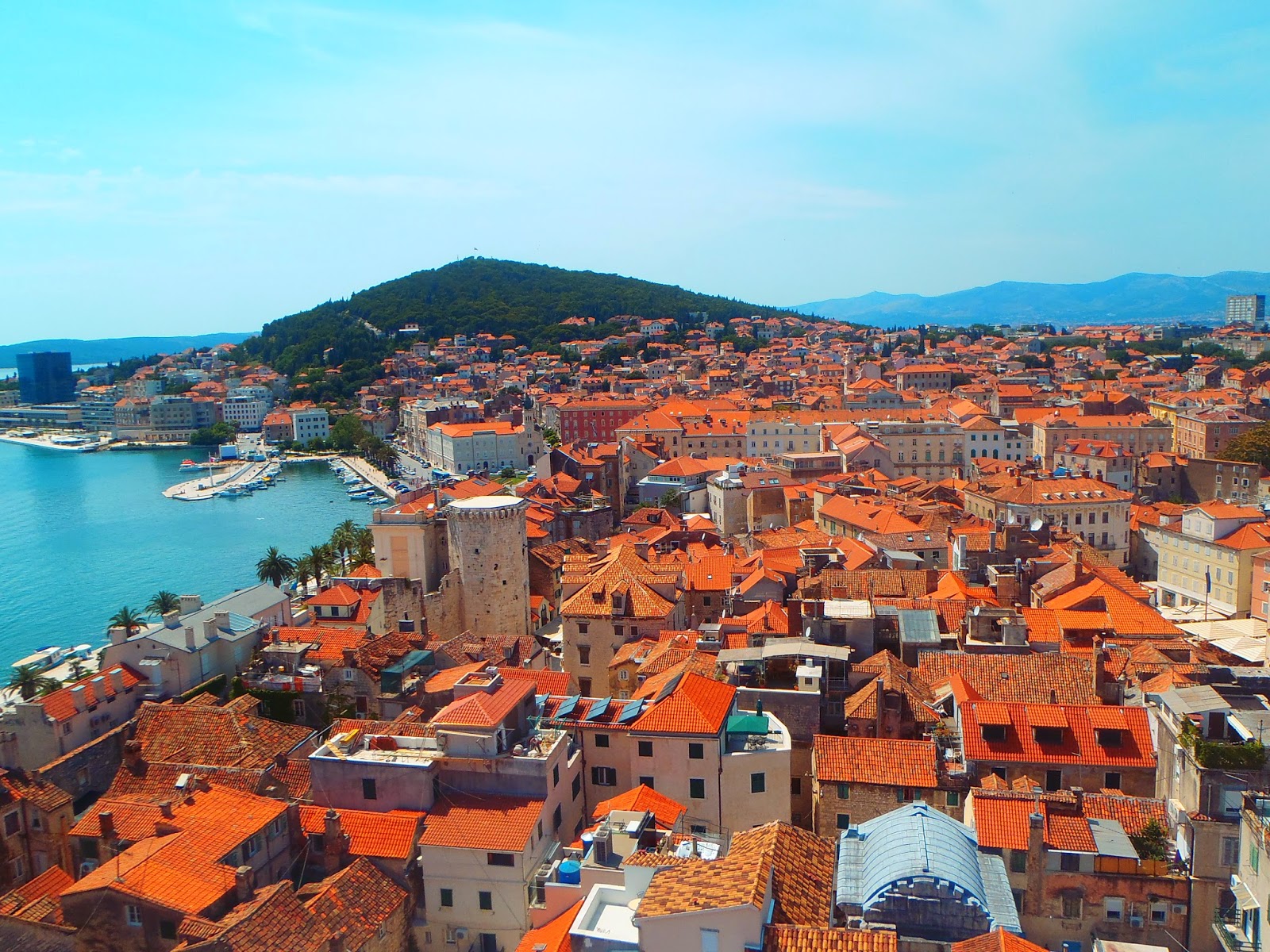 And we found a small area on the rock beach to lay our sarongs...so in all we made the best of this crowded city.
The night time was alive, with stylish Europeans walking the promenade and out for supper and drinks.

From split, we drove inland to a national park called Krka.

It was one of the two national parks that are must-sees while in Croatia. Krka has several water fall cascades that are formed from calcium carbonate, or limestone, which grow about 1 cm each year.
We walked along a crowded boardwalk to the main attraction and I went for a swim while Ashton took pictures and set up our picnic.

The grande waterfall was truly amazing, but we soon felt like we were exiting a football stadium with the amount of people walking along the boardwalk.

The next city, Zadar was great. It was comprised of an old town, beautiful churches and two unique attractions.
The 'sound and light' spectacles of the Sea Organ and the sun salutation were both very neat.
The sea organ looked like concrete stairs with holes throughout. As the water waves came in and out of concrete, the organ came to life and made continuous music through the vents.

The Sun salutation was a large round circle of glass panels in the concrete ground. When the sun went down, the panel eliminated beautiful colours throughout the night.

Unfortunately there was no sign to explain how these spectacles worked, and I really have no better water to explain the physics of it all.... So just pretend you hear an organ and see disco colours all made naturally from the water and sun.

After being a little bit disappointed by Krka national park, we himmed and hawed about going to Plitvice Lakes National Park. .. But our love for waterfalls prevailed and we are happy we drove the 2hours each way.

This national park was one of the most amazing places I've ever seen.

Comprised of 7 lakes, each an emerald colour, and waterfalls at every turn, this place was heaven. 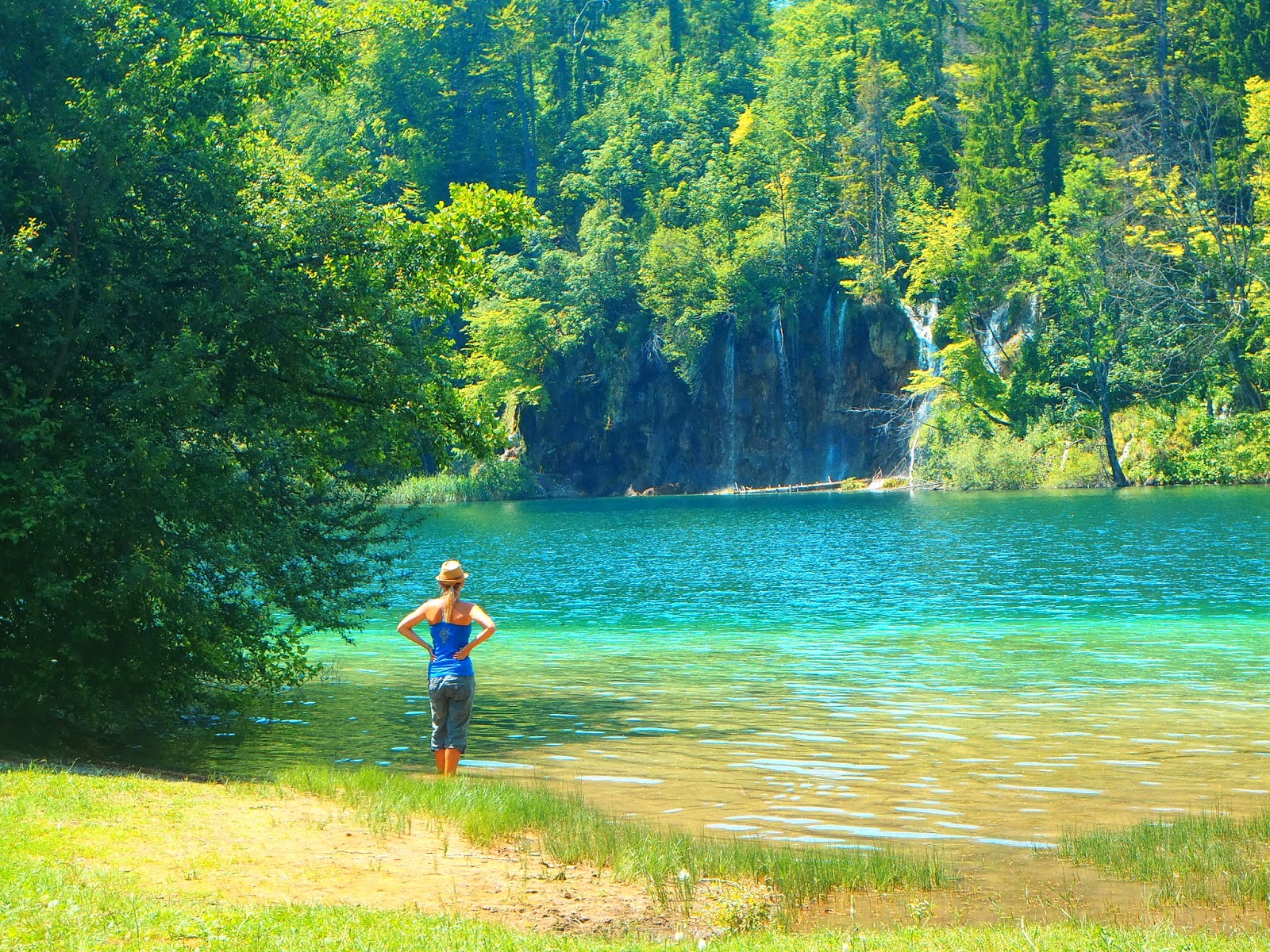 We hiked for 6 hours along pathways that sat literally on top of the water, and pathways on the edge of the lake or waterfall.
Swimming is forbidden in effort to preserve the natural beauty of this site. It was a hot day and the water was gorgeous, just beckoning us to jump in.

There were hundreds of tourists also exploring the national park, but it didn't feel as crowded because there were 6 different hiking routes one could take and because of the enormity of the park. Even when we were at a standstill during our hike, we were so fascinated by the beauty that it was easy to forget about all the other tourists.

We found serenity when we rented a row boat and Ashton rowed us around the tiny lake, stopping to enjoy the vivid colours, clear water, and rushing waterfalls. 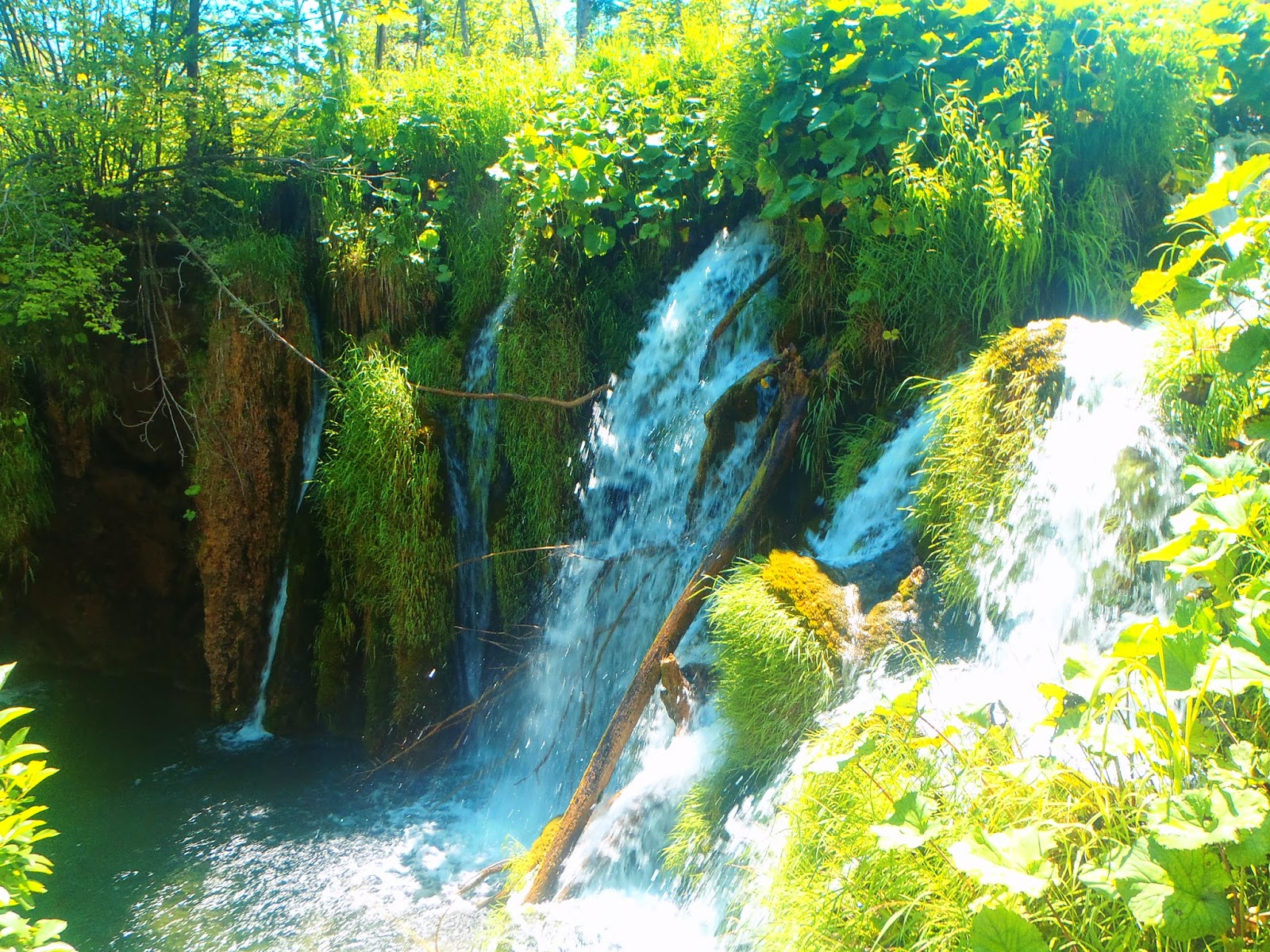 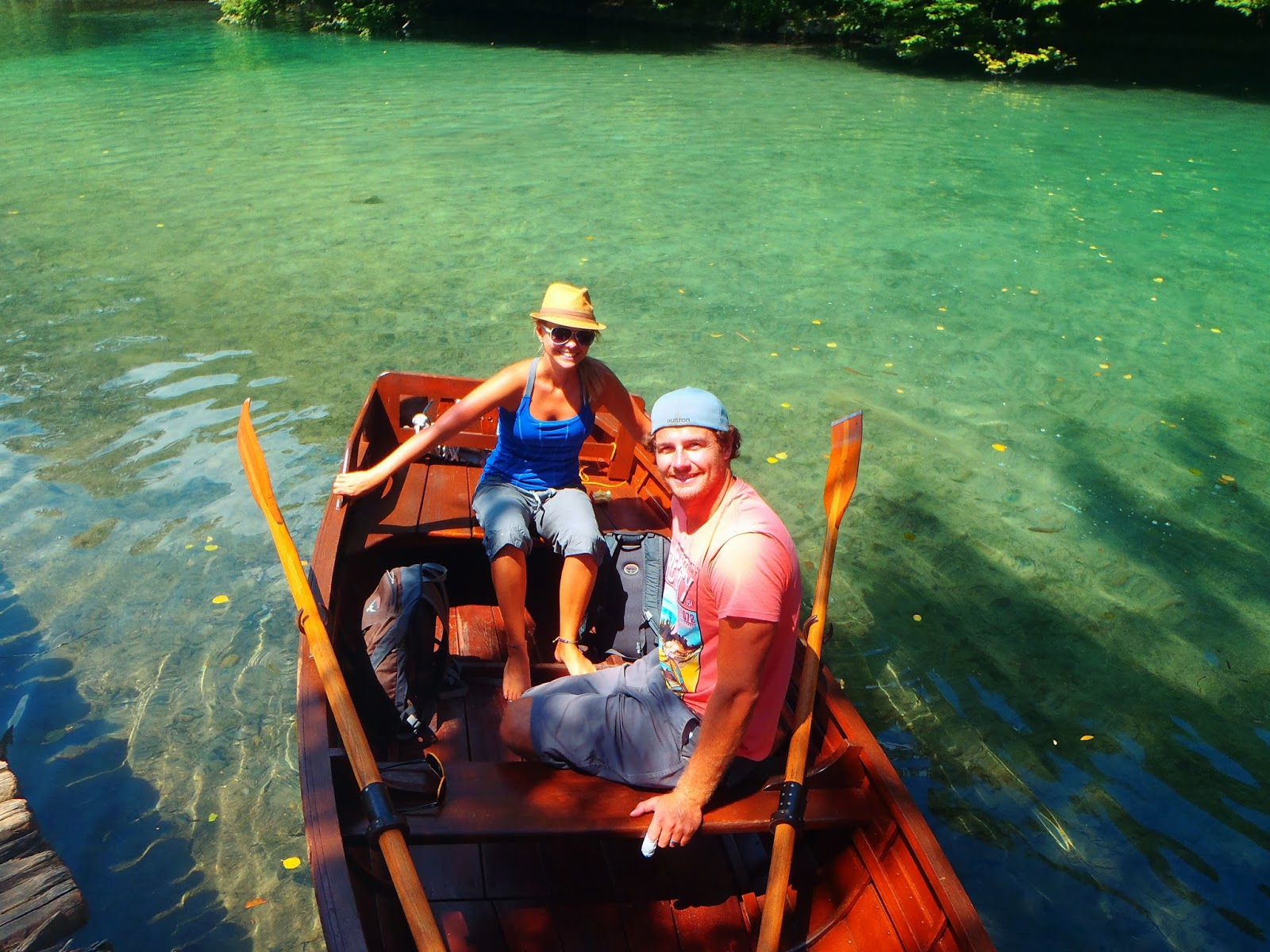 After the full day of hiking, we were zonked. We drove two hours back to the coast and stopped for the night at a basic room on the highway. A short walk away we found a camp ground in one of the coves and watched another beautiful sun set in Croatia.

After resting up, we drove to Rijeka to check into the BestWestern for our last couple nights of our 6 month backpacking adventure.
We are currently on the 6th floor, sitting on our balcony loving our view of the Adriatic Sea.

Were hoping to post one final blog before touching down in Canada.. So make sure to check back!... Otherwise it's been a slice! Thanks again for taking the time to read about our travels. Hope you enjoyed the photos.