A week in Crete how sweet...!
It seems like forever ago that we wrote our last blog.. And it seems like we've been on Crete for forever, yet, Greece is completely cruising by... Why is that?

Crete is beautiful, and so relaxed compared to the other islands. For example, after each meal out we are given a shot of complimentary "local liqueur" (which tastes like nail posh remover in my opinion, but 'we'... Er.. Ashton drinks it like a champ!..usually with our waiter.

In addition to the free liqueur, we've been given free wine (a half litre of wine!).. Free desert..free bread..and easy going service to top!
Ps. For those of you who questioned the pickles and ice cream craving,please note that Chelsey is still enjoying copious amounts of red wine.;)

But on a serious note.. It's everything we like about Greece on one huge island!... Mountains, history, lush green trees, gorges, caves, grapes, gorgeous coastal roads and beautiful beaches...

We rented a car for a week and are burnin' around the island, coast to coast..north to south and east to west.

Crete is the biggest of the islands and is more like a main land since there are several different villages and cities (the main city population is 137,000, and the second largest is 53,000).. There is a highway from east to west which runs along the north coast, otherwise several roads branch off the highway passing through the mountains, to the south coast. Both costs are lined with bays and rocks and beaches... So what I'm trying to say, is this is a large island!

We took a fast ferry from Mykonos, which was the nastiest boat I've been on. Due to the strong winds, the ferry rocked back and forth for a long 5 hours. It was so rough that the crew walked through the isles, passing out barf bags. ..I noticed two ladies run to the bathroom looking green. .. Ugh!

Luckily Ashton and I have strong stomaches, but even then, we felt pretty gross.

When we finally reached land, we had planned to take the local bus to our accommodation. It was dark, cold, late and we had sea legs, still feeling woozy from the rough ride.. I commented to Ashton "i wish this one time there would be a group of backpackers that we could just follow to our room so we don't have to 'try!"..... Ironically our bus showed up at that moment and a backpacker ran amoung us to the bus.... But we were all too late and the bus drove away! The backpacker had a Canadian flag on her pack!, ... Now that's just weird. "Where in Canada are you from I asked" ...Calgary, Alberta! Ha... (Right after I hoped to run into another backpacker.. )..Anndd... She was going to the exact same hostel as us!..freaky!

We made a friend! A super nice girl from Calgary. We hit it off, and had supper and lunch with her. She was a solo traveller exploring Europe. We swapped stories and hugged goodbye.

It's true that Canadians are the nicest people... In each country we've been in we are asked several times a day, where are you from.? Canada! Each person smiles and says "oh Canadians are so nice! " followed by.. "Such a big country. So cold there. So far from here!" Hah a..we've also heard "oh sorry, I thought you were American"...and lately we get a few people guessing were Australian. (We both like that one! Seeing how Australian people are also awesome!)

Back on track..
We explored Crete from the comfort of our tiny, blue, open roofed car..."Betty!"
(Ryan Grzinic named his car 'Veronica', so we followed suite)

A night or two in each region kept us moving along at a good pace...

Our "studio apartments" all had kitchenettes where we kept our yogurt and water cool, made coffee and even made a pasta meal one evening...it was pretty delicious, but nothing beats a Greek salad and Gyro.

First day with Betty we cruised the eastern highway, stopping to walk around St.Nicolas city which was very lively and very chic. A quant port, alongside a tiny lake made for a very pleasant afternoon of strolling along the bustle and beauty of the town. The sun was warm and the beer was cold!

Now that we're on Crete, the weather has been excellent. No more strong Mediterranean wind.. I dug out my tank tops and shorts and have even been able to tan!! Yay!

After St. Nicolas, we cruised to vulgous beach. In a sheltered bay, the water was so blue and the sand so fluffy. We played paddle ball for a couple hours while the sun set.

Paddle ball is basically like badminton but with a tennis ball and two wood paddles. We don't know exactly what it's called so we decided to call it paddleball. Great fun! A set was $7 so Ashton has been lugging them around beach to beach and we make sure to get a couple hours of paddle ball in at each beach were at. my legs and arms are quite sore which either means it's a good workout, or I'm outta shape.... Both!. Day two we saw Lasithi plateau and Zeus cave. The plateau was super neat, as Betty zig zagged up the mountain and somehow came out at a flat area. It was like we were back on flat land Sk. With fields of crop everywhere. Weirdly enough we were still 900 m above sea level and way up in the mountains. The plateau was a large round flat area surrounded by mountain peaks. 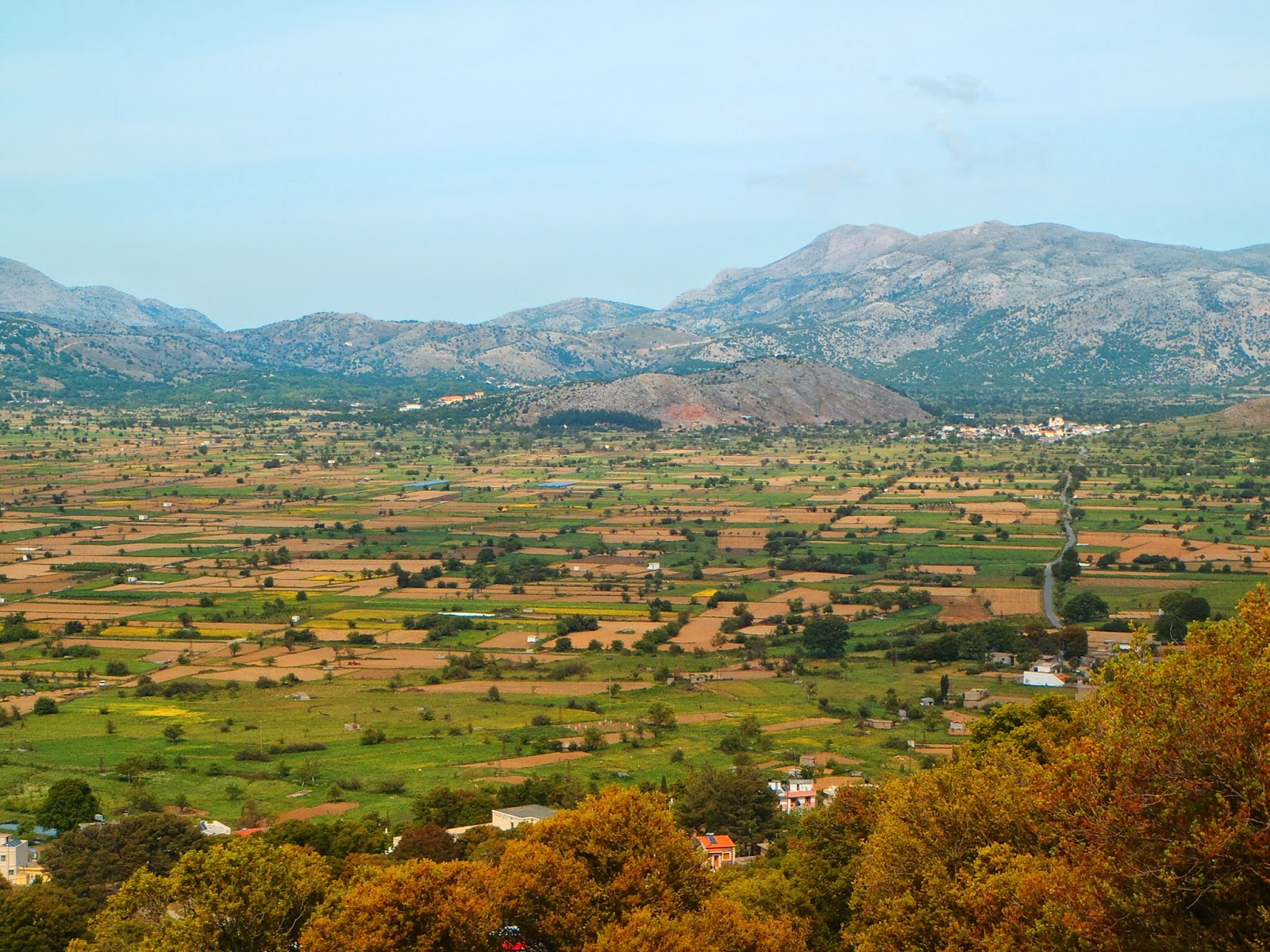 Zeus cave had a rocky climb up to the entrance where a small fee was charged. Then steps descending into the dark cold cave where Zeus, Greek God, was born. pretty neat cave.. Not sure it's the best place to have a baby...but hey.. In ancient times things were different

Matala beach was unique and has an interesting history of being hippie land.

Currently we are in the west end of the island which is supposedly the best area. It lives up to expectations with beautiful mountains and even more stunning beaches..

Elafonisi beach and Balos beach are both spectacular. Pictures don't do it justice.. The water is deep blue with clear aqua colours around the shallow areas. The sand was white and PINK! ..

We found a sheltered beach on Elafonisi to play paddle ball!

Balos beach was a touch more amazing because of the trek there and back. A 9km drive on dirt road overlooking the coast... And 2km hike alongside goats and mountain terrain to the viewpoint.. Then a steep Sandy walk down to explore the beach.

Now that's talent! Ashton is balancing on his hat and didn't even spill a drop
As Betty bounced around the gravel road, Ashton sang "be gentle..it's a rental"...(don't tell our renter that we drove gravel roads! Eeks!)

Our daily routine has consisted of... Waking up and making instant coffee. Enjoying our coffee and yogurt on our balcony while emailing all of you. Then making a plan for the day, as well as thinking of what we may want to do the next day and where we should stay the night. We go onto booking.com and reserve a room for a night or two. Then we pack up and wake Betty up. Time to explore.

Grab a quick bite to eat and enjoy the afternoon. The sun sets around 7:30..so we try to be on the road and at our room before it gets dark. After lugging our bags to our room, showering,a glass of wine.. We are starting to get hungry. We head out for supper around 9 and are exhausted and ready for bed by 11. More internet time and we are zonked! Excited to do it all over again tomorrow!

Today we were up early to drive to, and then hike the Imbros Gorge!! The hike took us about 2 hours each way. Most people hike down the gorge then take a taxi around the gorge to return to their vehicle. But we enjoyed it so much and had the energy, so decided to see it twice and walked back through the gorge to our vehicle.

It was a fairly easy hike, however the path was made of rocks and good shoes were a must.
It was an incredible walk. Birds chirped, the sun shone, wildflowers were in full bloom, and the gorge itself was super nice. The history behind the gorge is also fascinating.

In May 1941, during the war, 20,000 allied troops walked through the gorge, heading toward the south shore where they were picked up by ships and evacuated to Egypt where they would be safe from the Crete war.13,000 made it on to the ships, and the remaining troops were made prisoners of war.

My favourite moment during our gorge walk was when Ashton pointed out two goats on the top of the mountain...I started snapping pictures .. Then simultaneously, Ashton said "Is it raining. I just felt a drop!," and I said "ew! The goat is peeing!".... LOL..

(These aren't the guilty goats peeing from atop.

I thought that would be too gross !Hah ah a)

We are sad to say goodbye to Betty, and even more sad to leave Greece! It's been a beauty!..

(Pop quiz: what are those brown "decorations"on the ground'!) ??You lineman out there should know...

Anyways. the world is so big, and we have plenty more to explore!... We are off to......
TTUURRKKEEYY!