Our first overnight bus surprisingly wasn't horrible.. We both managed to get about 5 hours of sleep. Which is a personal best for Chelsey! No bathrooms on the bus, so during our 12 hour ride We stopped three times for what seemed like forever...but we arrived safely at 7 am and got picked up by our hotel manager

Cappadocia area is a "must-see" in Turkey. It is dreamscape dotted with fairy chimneys (rock formations) and is unlike anywhere else on the planet!! 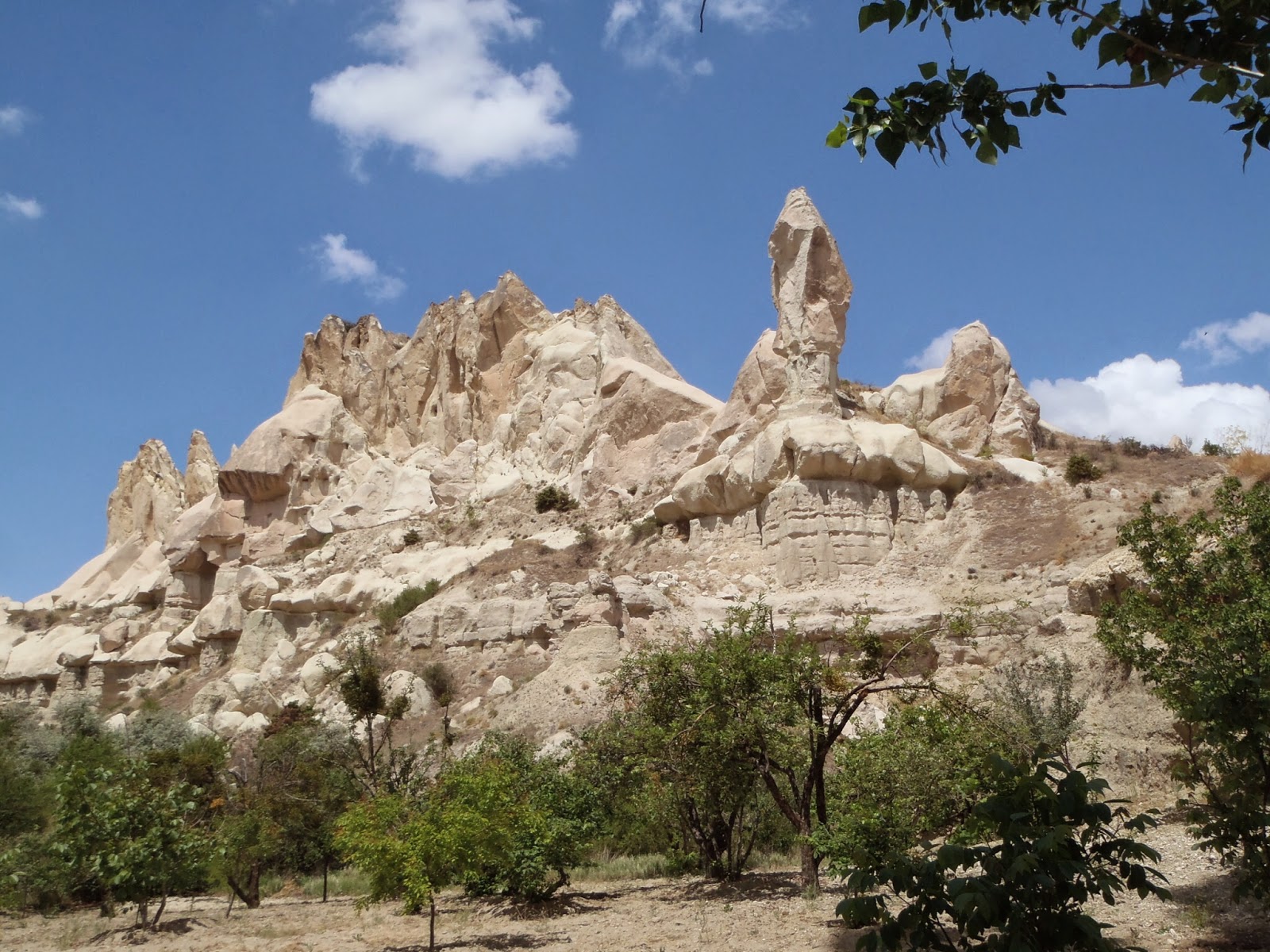 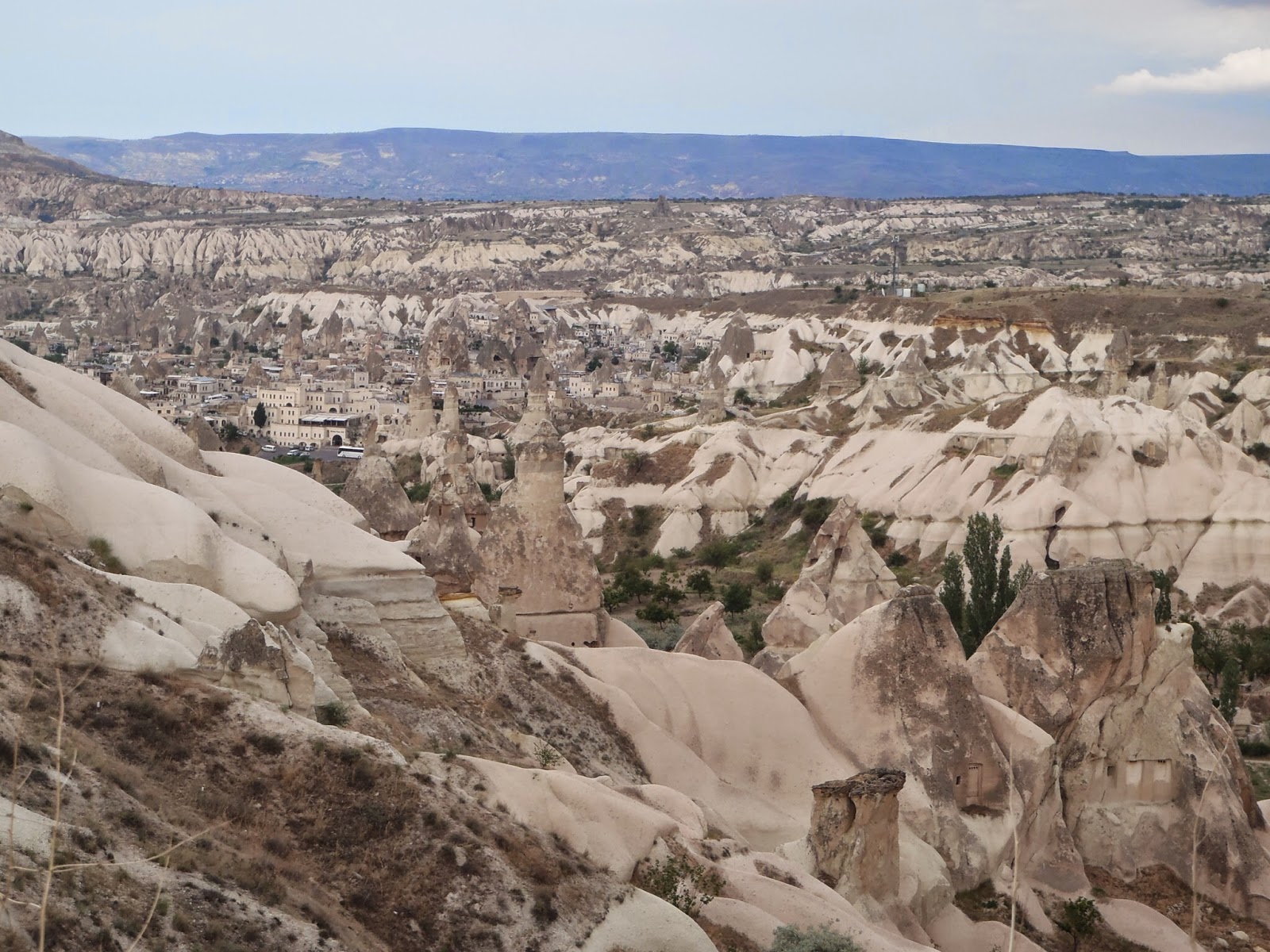 The “fairy chimneys" were formed millions of years ago from volcanic lava turning to tuff with basalt on top. Eventually, erosion wore the tuff into narrow towers but the basalt tops remained, leaving behind the odd chimney-looking shapes. Throughout history, the caves and chimneys were carved out to form homes, monasteries, and excellent hiding places. Today they are a major tourist attraction and many of the caves and chimneys are used as hotels and restaurants.

We stayed in a cave! In the beautiful village of Goreme! Our views were spectacular especially during sunrise and sunset.

We spent several hours each day hiking through the valleys. There were 5 main valleys around the town, each with their own name, respective to what the rock formations looked like..

Anyways, as you can see in the pictures, Cappadocia is very unique and stunning.

A highlight of our whole trip was taking an air balloon over the valleys.

We did a lot so research to select a good balloon company, and we were beyond pleased with Turkeye Balloons.
At 4:30 am sharp they picked us up and took us to their restaurant where a plentiful buffet met us. About 40 people were having breakfast, but the company soon divided us into two groups and we were driven to Rose Valley to watch our air balloon get blown up.

We boarded the balloon with about 25 people, 5 to a section and 2 pilots. We were comfortable and enjoyed the company of the pilot and the fellow tourists from India.

Our pilot expertly flew us low to view the scenery, then weaved us in and around rock formations, then had us the highest balloon in the sky..

Apparently 130 balloons used to fly in the morning, but the government cut back for safety reasons and now there is a maximum of 100 balloons in the sky every morning. Which is still a ton!!About 2,000 people are in the air every day!!

We lucked out with a perfectly calm morning and watched the sun rise through the clouds. It was incredible!

After 70 minutes in the air, we landed perfectly on the platform and had champagne and juice in the field.then we were each awarded a certificate signed by the pilot. Lol.. Which was cute .. However, my certificate stated that Celsey Zunti rode the air balloon. Haha...close enough.

Cappadocia also has hundreds of underground cities. It’s not known exactly how many underground cities there are but some estimate around 300. The city we visited was several stories below ground. They were used long ago for communities to escape from enemies. It is believed that Christians settled in the area during the fourth century, as they were persecuted for their faith.

The most incredible aspects of the Cappadocia underground cities are their sheer size and complexity. Some of these cities are eight levels underground, with living quarters and facilities for making grape juice, cooking, drainage and plumbing and even stables for horses. these underground cities were vital forts, protecting their citizens from intruders.

we spent hours exploring above ground cave homes and churches which dated back to the 13th century. This particular monastic settlement was where 20 monks lived.

Can you imagine your family sleeping and eating here?.. I only pretended for a couple minutes and it was very uncomfortable! Lol
Aside from the hot air balloon ride,one of our favourite days was finding a trail and hiking through the serene valley, saying hello to other hikers. We managed to walk 4 km to the nearby town in our flip flops!! Once at the town, we climbed a castle and found ourselves humming "I'm the king of the castle.. Your the dirty rascal.."

Then we enjoyed a long delicious lunch in a tree house restaurant overlooking the valley. We love the food here. It's a lot of flavoured beef and chicken. (No pork, hence the. Muslim culture),.. Kebabs, rice, salads, tea


We walked ourselves tired and boarded our second night bus at 8:30.
Night bus = fail. Tiny seats, hot bus, annoying workers,long stop,lights on,coffee served at 3am???.. Grr.. One hour of sleep for each of us= grumpy and tired Ashton and Chelsey...
Now were in Antalya. A beautiful port city. On our way to the turquoise coast!!