Well hello hello friends and family.
How is home treating you? Thanks for reading our blog.
I know there's a lot of text and not a lot of pictures. (Sorry Jordan) hah a.. We've taken majority of pics on my camera so we can show you them when were home. For now you can google the places we've been and the sights we've seen. The only difference from google tour pics would be that Ashton and I are in each sight...and we look the same..maybe a bit chunkier and tanned, but your not missin much ;)

Alrighty, where were we.. Ah yes.. Coffs Harbour. Our last day was yet another hot, sunny day. A Sunday. Every Sunday there is a local market with live music, and booths set up. (Like the farmers market.. Even though I've never been to the farmers market in Saskatoon, I'm assuming they are the same)..our big purchases.. A large licorish (not grown, and not local,lol) but it went well with the local lemonade and ice tea. Then we walked down to the Jetty. (A Jetty is a big long dock for boats). At mid length of the jetty lots of kids were jumping off The sides, about a 5 metre height. Doesn't sound like much, but when your looking over the side into the ocean .. It is quite high. Jumping off the jetty is like the thing to do here. Your not cool until you make the big jump. Ashton went first and gave me the go ahead. I did it! It wasn't until after I jumped that Ashton said "wow, that was higher than I thought and quite an adrenaline rush".. No way that would be allowed at home. Hah a.. Needless to say I could not muster up the courage to jump again, after knowing how high it was and how much salt water gets up your nose. Ashton jumped a second time and was draining salt out of his nose a day later. Ha ha.. He had fun! And my jump was also fun.. So now we can save we have jumped off the jetty. We are cool now.
We spent the afternoon stand up paddle boarding on the creek. It was nice! SomewhAt challenging.. Some might even call it a work out ;) 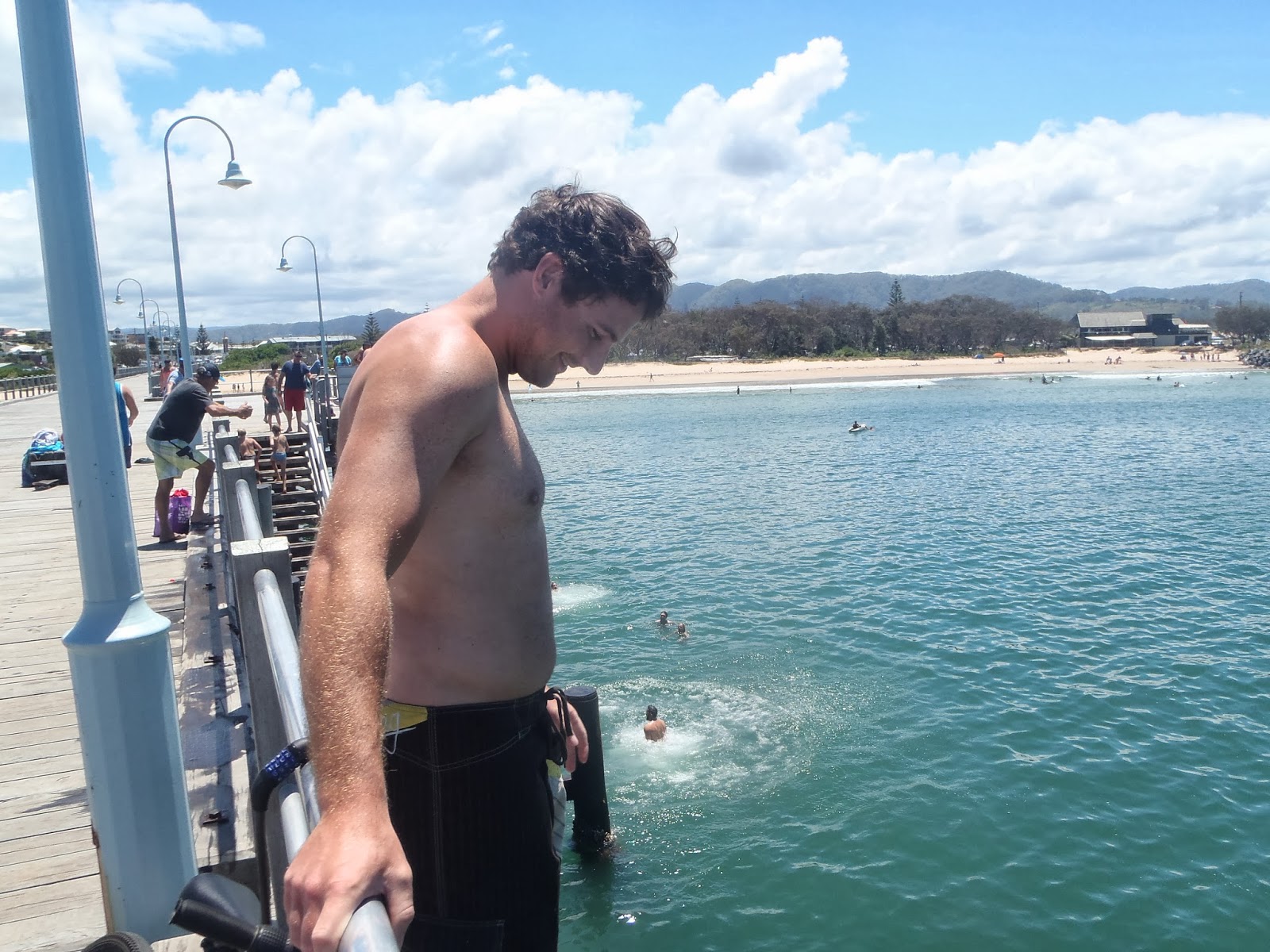 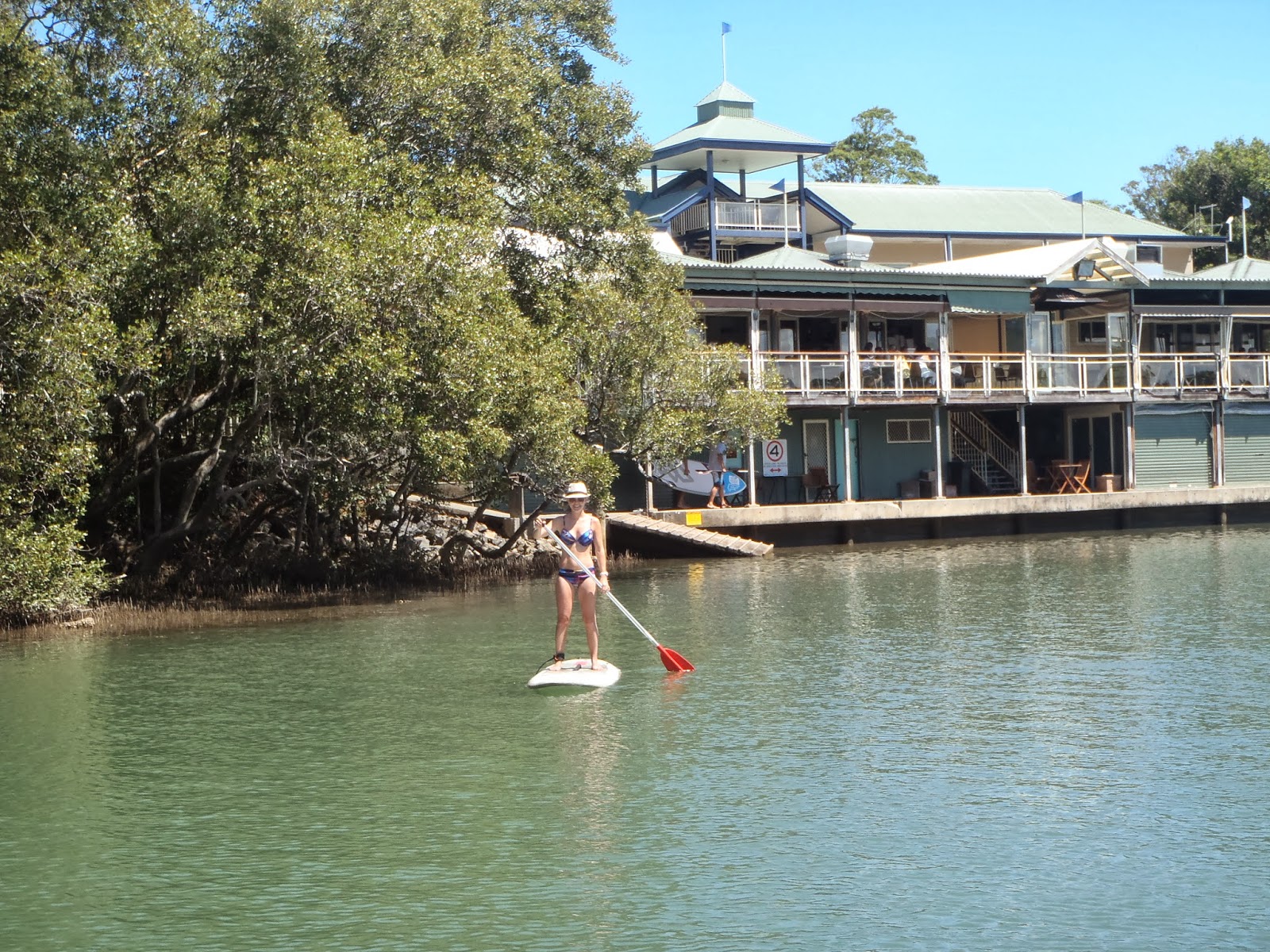 Late afternoon we showered, ate and took off... On ward and upward.. Destination Byron bay.. Our plan was to drive until we needed a break. There were 4 campgrounds on our map between Coffs and Byron. Bbuuut due to the highway construction, these campgrounds were all unavailable.. It was getting dark and ashton was tired so we pulled over onto a rest stop on the side of the highway. Just before it started to pour. Good timing... The donkey kept us dry, while we enjoyed some cider. (We've decided to become cider drinkers when we get home..so yummy.) any hoodles we set up camp and decided to sleep and get up early to keep driving. Well it was loud night. Semis drove all night long= Chelsey no sleep.
Now it's Monday morning, Super Bowl morning. Ashton's mission- find a sports bar to watch the game. We made it to Byron bay 10 minutes after kick off and watched the game at 11 am ...the sports bar was displaying the game on three big screens and the place was packed with football fans.
After the game we went to a travel agent and booked two big exertions here in Australia... Fraser Island and white Sundays. I'll describe them when we actually do them In a week or so...should be a guaranteed amazingly time.
Then the lack of sleep caught up to me and I was out of commission. I spent the next couple hours with an ice towel on my head and a booming headache trying to sleep, while Ashton walked around Byron Bay finding us accommodation.
We parked at the arts factory hostel a short walk from the hub of Byron .. Super cool grounds. Google it.
Byron bay is a hippie town.. Full of restaurants, shops and beach. We should have ditched our sandals to fit in.

We sunbathed and swam as well as trekked 4 km to the Byron bay lighthouse. Nice hike. Along the way we stopped at the most eastern point of Australia. once we reached the top we had magnificent views. As exciting as light houses are we were quite intrigued so decided to take a tour.. We were 10 minutes too late. The tours had ended for the day. Back to the arts factory hostel we went. We made a feast and watched the weekly talent show. Amazing. From dancing to guitars to didgeridoo to beat boxing, we were fully entertained. Ashton even did a solo! ...just kiddin...

After waking up to a cloudy day we decided to limber up with a morning walk to the light house. Just as we made it to the top, it began to rain. We escaped the rain by taking a tour of the lighthouse. Guided by local volunteers. Basically three lighthouse keepers would rotate off with watching the waters. Family lived in a nearby house. Pretty lonely lifestyle as the keepers kept watched 24 7 and relied on incoming boats to bring their families Supplies to survive. If it was stormy and the boats
couldn't make it through the water, the family would have no food for the week. A tiny lightbulb was in the centre of a rotating glass that shone out to the ocean to lead ships inland and to alert sailors of rocks or dangers in the water. They would shine the red light which meant danger, redirect your boat or else.... 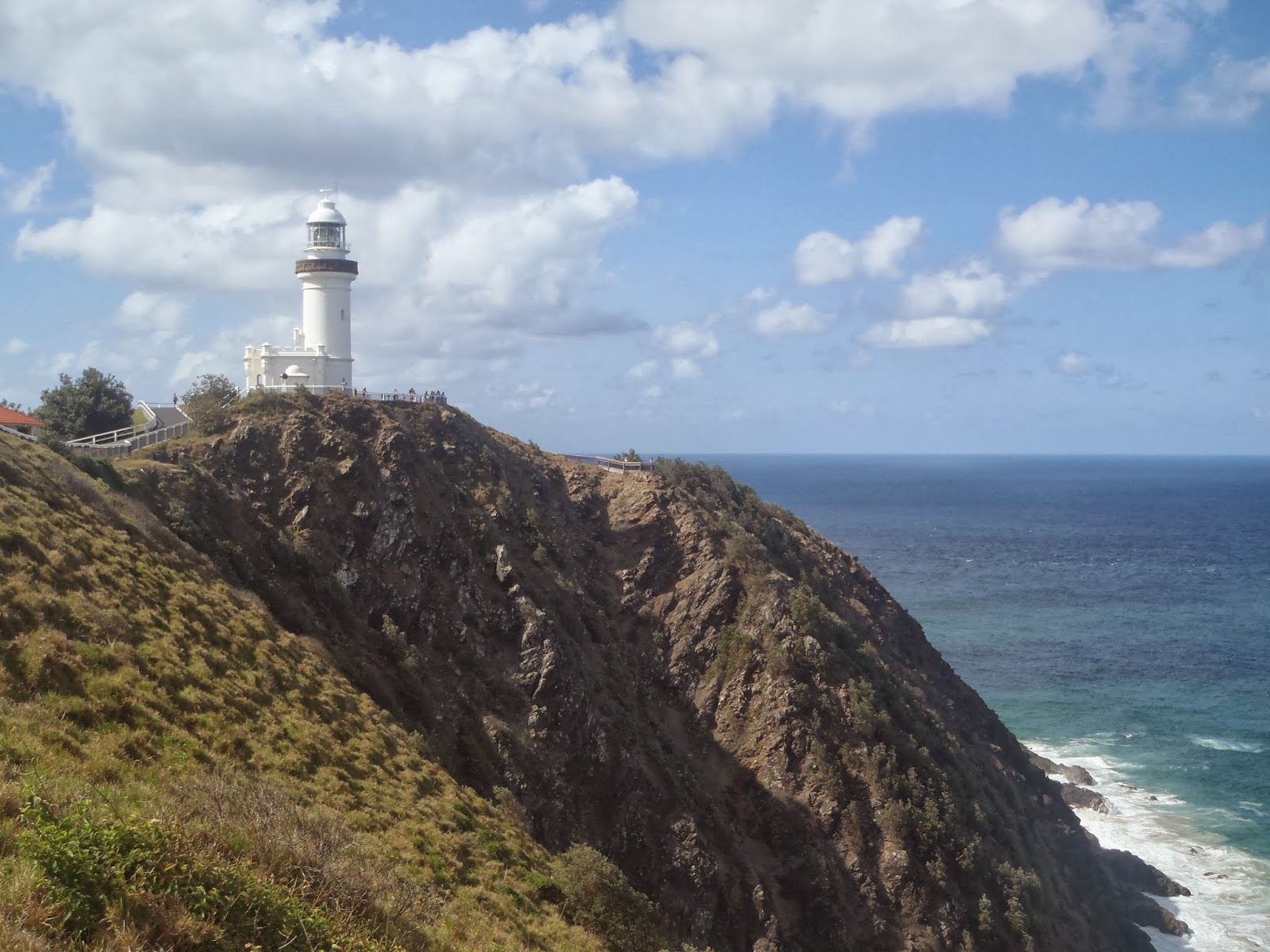 After the tour we were caught up in the rain and time we walked the 2 km back to our hostel we looked like drowned rats. It was a warm rain, but still.. Very wet
Movie night! Our hostel was attached to the local Byron bay theatre.. 8 rows of pews and a big screen. We watched "the secret life of Walter minny'. An inspirational travel film.